Inside Russia’s relationship with Rosneft and Venezuela

Although nothing is ever clear-cut where Russia is concerned, the country’s decision to reduce its stake in oil giant Rosneft is likely the result of US sanctions and the company’s relationship with Venezuela 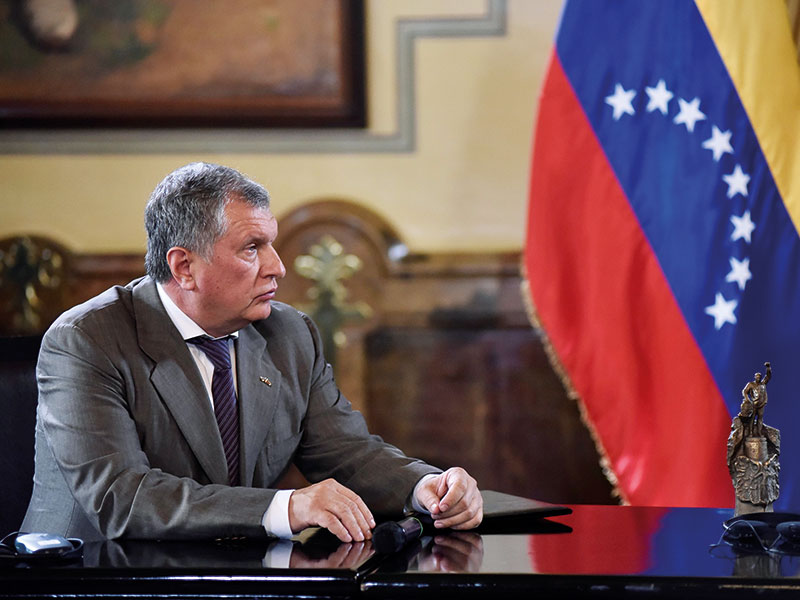 Murky business: the close relationship between Rosneft CEO Igor Sechin and Venezuela has continued into the presidency of Nicolás Maduro
Featured

It has been claimed by many a political observer that Russian President Vladimir Putin’s main strategic tactics are confusion, disinformation and chaos. All is not usually as it seems when the former KGB intelligence officer is involved – either directly or behind the scenes. This is pretty transparent when it concerns electoral interference or state-authorised cyberattacks against foreign powers, but things are subtler when it comes to Russia’s business environment.

Much like many of the world’s other markets, Russia’s corporate landscape contains both state-owned enterprises and private companies. At times, though, the line between the two is blurred. Rosneft is known around the world as one of the energy industry’s biggest players, operating in 25 countries and responsible for six percent of global oil production, but the extent to which it operates to serve the interests of the Russian president is difficult to say with certainty.

Until recently, Rosneft’s relationship with the Kremlin was relatively well understood. Through a holding company – Rosneftegaz – Russia owned more than 50 percent of Rosneft’s capital. In March, however, that changed, with the Russian state announcing it had reduced its stake in Rosneft to below a majority standing. The reasons are likely to be connected to Russia’s support of Venezuela and the probability of this leading to US sanctions. But whether or not Russia’s Rosneft divestment will have the desired result remains to be seen.

Joining the dark side
The connections between Rosneft and the Kremlin run deep. Igor Sechin has been CEO at the oil firm since 2012, but he previously held several political positions, including serving as a mayoral aide to Putin and as Russia’s deputy prime minister. He is an imposing figure, described variously as the “scariest man on Earth”, the “grey cardinal of the Kremlin” and “Darth Vader” by Russian media. Putin and Sechin have been pictured together numerous times, with the pair’s close relationship enabling Sechin to make bold business moves that would perhaps have seen other business leaders removed.

One risky decision has been Sechin’s support for Venezuela, which has had significant ramifications for both Rosneft and Russia. The reasons for such support go back a long way: in the late 2000s, the Russian Government was busy trying to convince other countries to recognise the independence of Abkhazia and South Ossetia, two breakaway states in Georgia. In 2009, then Venezuelan President Hugo Chávez agreed to do so, and promptly received $2bn (€1.82bn) in loans to purchase Russian arms. Other agreements between the countries soon followed.

The close relationship between Sechin and Venezuela has continued into the presidency of Nicolás Maduro, with the Russian state and Rosneft listed among a small group willing to lend funds to the beleaguered South American country. But the decision to keep the alliance going may have seen Sechin overreach: in February, the US imposed sanctions on a Rosneft subsidiary for dealing in Venezuelan crude, with shares in the Russian oil firm declining as a result.

“As the primary broker of global deals for the sale and transport of Venezuela’s crude oil, Rosneft Trading has propped up the dictatorial Maduro, enabling his repression of the Venezuelan people,” US Secretary of State Mike Pompeo said in a statement. “Maduro has destroyed Venezuela’s institutions, economy and infrastructure, while enriching himself and his cronies, through his abuse of state power and his welcoming of malign support from Russia, as well as from Cuba, Iran and China.” In March, the US struck again by sanctioning another Rosneft subsidiary for operating in Venezuela. Given the difficult circumstances Rosneft finds itself in regarding broader developments in the oil market, it may be time for Russia to reassess its relationship with Maduro’s regime.

Slippery customers
Following the US sanctions, it seemed as though Rosneft was willing to cut Venezuela loose; on March 28, the company unexpectedly announced that it had completed the sale of its assets in the South American nation to an unnamed organisation owned entirely by the Russian Government. In exchange, Rosneft received 9.6 percent of its own shares, ensuring that, for the first time, the Russian state would not own a controlling share of the oil firm.

Although the sanctions were not referenced directly in the statement announcing the divestment, Rosneft has undoubtedly been affected by the measures: shortly after Washington announced the sanctions, Chinese oil firm Sinochem declared that it would not buy oil from Rosneft, denting Russia’s ambitions of gaining a larger share of the Chinese market.

But exactly how much distance is being placed between Rosneft, the Russian state and Venezuela is difficult to say. After being rather coy about the sale, Rosneft confirmed that the unnamed government entity that had bought its Venezuelan assets was a newly created company called Roszarubzhneft. Some have described the move as a sham divestment – not entirely without precedent.

In 2018, Russia used the state-backed Promsvyazbank to create a new banking vehicle that would support the defence sector following US sanctions against domestic arms producers. In fact, Russia has had plenty of opportunities to discover the best ways of mitigating the impacts of international sanctions.

“Since 2014, US and EU sectoral sanctions have restricted Rosneft’s access to deep-water, Arctic offshore and shale technologies,” Nigel Gould-Davies, Senior Fellow for Russia and Eurasia at the International Institute for Strategic Studies, told European CEO. “Sechin has been under personal sanction since 2014. ExxonMobil was fined $2m [€1.82m] for contracts it signed with Sechin in this role. Last December, a US district court in Texas overturned this fine on the grounds that US Treasury guidance was not clear that personal sanctions on Sechin also prohibited dealings with Rosneft.”

How much distance is being placed between Rosneft, the Russian state and Venezuela is difficult to say

It all adds up to a bewildering situation, with multiple stakeholders present in different markets and bureaucratic manoeuvrings having huge financial impacts. What’s more, this is all occurring against the backdrop of a huge worldwide fall in the value of oil, which will also need to be factored into Rosneft’s next decision.

Putin on appearances
For now, though, attention will focus on the US and what it decides to do in light of Rosneft’s divestment of its Venezuelan assets. In April, US Special Representative for Venezuela Elliott Abrams suggested the sanctions on Rosneft could be lifted, but cautioned that further analysis would be required first.

While the US decides, Russia and Rosneft have plenty to keep them occupied, including historically low oil prices and deciding whether production cuts should be pursued. It’s an area that has seen Russia in conflict with OPEC.

“With regard to ongoing issues related to oil supply cuts, much depends on the scale of the oil demand shock and the ability of OPEC+ members to coordinate a further response if needed,” Gould-Davies explained. “Russia’s initial rejection of supply cuts in March, which triggered a brief price and market war with Saudi Arabia, has left it badly placed to play a leading role.”

Rosneft executives have events occurring closer to home that demand their attention, too. After settling another pricing dispute, Rosneft was Belarus’ biggest supplier of crude in April. Sechin and the Belarusian President Aleksandr Lukashenko had met earlier in the year to help improve energy relations between the two parties.

Turning back to Venezuela, Maduro has praised Russian support for his country even following the Rosneft divestment. This makes it unlikely that Russia will turn its back on the South American country entirely, even if – on paper, at least – Rosneft is no longer involved. Just as it’s not clear whether Rosneft still has a stake in Venezuela, it remains difficult to say in what capacity Russia will continue to support the South American state. As always with Russia, confusion is the only thing that can be guaranteed.