Brussels Airlines is the leading Belgian airline that offers the widest choice of flights to and from its base in Brussels Airport. The airline connects the Capital of Europe to about 70 European and African destinations 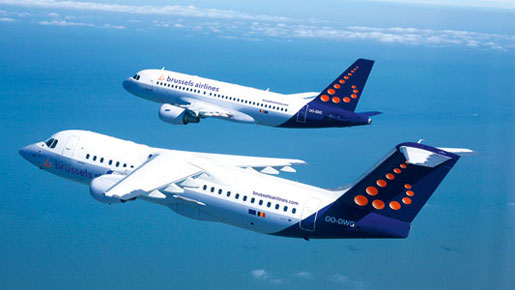 Customers of Brussels Airlines can count on a reliable, caring and value-oriented service. On its European routes, passengers have the choice of a genuine business class product offering all the advantages of flexibility and premium service (b.business), a flexible travel formula where time-saving and comfort go hand in hand (b.flex economy+), and a low fare solution (b.light economy). On medium (to Tel Aviv) and long-haul flights (to Africa), passengers can choose between a traditional business or economy class.

Products to suit your every need
Passengers who choose to fly with Brussels Airlines are guaranteed exceptional ease and comfort on the ground. Brussels Airport, designed on a human scale, is one of Europeís most user-friendly airports. Transferring from one flight to another is convenient and easy thanks to clear multilingual signs around the terminals. Travellers also have access to a wide range of shops offering tax-free merchandise. Brussels Airport has received several awards, including ìBest Airport in Europe 2010î at the European Routes conference, and Airport Marketing Award 2010 at the World Routes conference.

Miles & More is Europeís leading airline loyalty programme, offering Brussels Airlines’ passengers direct access to a fantastic range of benefits and advantages when flying throughout the world. With direct access to a huge range of Miles & More airlines and numerous ground partners, Brussels Airlinesí frequent flyers can now earn miles faster than with any other programme.

Whether youíre between meetings or on your way to the airport, you can manage your travel plans with Brussels Airlines easily. Check in anywhere, any time from your web-enabled mobile device (from 24 hours right up to one hour before your flight). There is no need for a printer as the boarding pass will be sent to your mobile device as a 2D barcode, which can then be used at many locations in airports.

Brussels Airlines is owned by SN Airholding, and is backed by more than 80 years of aviation experience. In June 2009, Lufthansa Group became a shareholder of the airline. On December 9, 2009, Brussels Airlines joined the leading global airline network Star Alliance.