It has been evident for years that Europe needs an energy system that can cut dependence on fossil fuels, bring down future energy costs, and fight climate change 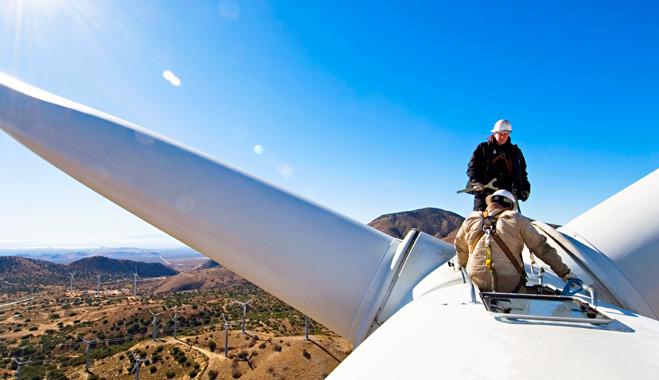 But the Fukushima accident in Japan a year ago underscored the need for an energy source that will fill the gap left by declining nuclear power. Many ask: is renewable energy up to the task?

In the aftermath of the Fukushima meltdown, European Commission President José Manuel Barroso said that now is the time for the renewables sector to “prove itself as a scalable, affordable, and secure energy source… I believe that is going to happen.”
Germany plans to abandon nuclear power by 2022, and Switzerland by 2034. Italy has voted against restarting its nuclear programme, which was halted after the Chernobyl disaster in 1986, while Belgium has resolved to decommission the country’s two nuclear plants.

And, in France, nuclear power is becoming an election issue, with the opposition proposing to reduce its share of electricity production from 74 percent today to 50 percent by 2025.

But the decline of nuclear power is nothing new: between 2004 and 2011, more nuclear-power capacity was decommissioned worldwide than was installed. Last year alone, the world installed 50 percent more new wind-power capacity (41.2 gigawatts) than all new nuclear capacity installed from 2002 to 2011 (27.3 GW). In terms of electricity production, the wind-power industry has installed the equivalent of 1.3 nuclear reactors per month over the past three years.

In Germany, where nuclear power accounts for 22 percent of electricity production, replacing reactors with renewables is already viewed as a realistic alternative. Indeed, according to a report by the German government’s Ethics Commission, Germany should be able to replace nuclear power with renewables in a decade. The German government estimates that domestic electricity prices would rise by just €0.01/kWh, equivalent to €3 ($3.90) per month for an average German household, if it phased out its nuclear fleet. If Germany can do it, so can the United Kingdom (where nuclear power accounts for 16 percent of electricity supply) and Spain (where the share is 20 percent).

The European Commission, too, envisages a significantly higher share for renewables in Europe’s energy mix. According to its estimates, three percent of all new power capacity installed from 2011 to 2020 will be nuclear, compared to a 71 percent share for renewables.

Opponents argue that renewables are expensive and dependent on subsidies. But a report last year by the UK government’s Committee on Climate Change noted that the cost of onshore wind power was cheaper than new nuclear power in 2011, and predicted that it will remain lower in 2020, 2030, and 2040. Likewise, France’s Court of Auditors has said that the cost of electricity from new nuclear capacity could jump to €70-90/MWh in 2020 – a level with which onshore wind power could easily compete in most parts of Europe.

Private investors concur with such assessments. Uncertainty in the UK over nuclear planning, construction costs, electricity prices, operating costs, waste, and decommissioning creates risks that are “way too high to give you an electricity price which is affordable,” according to Citigroup. Investors will steer clear “unless the UK government is willing to fully underpin construction, power price, and operational/safety risk.”

In October 2011, former UK Energy Secretary Chris Huhne said that two-thirds of the budget for the government’s Department of Energy and Climate Change, or €2.4bn a year, is spent on nuclear power. But that is a drop in the ocean compared to decommissioning costs. According to Huhne, “the provisions for nuclear decommissioning costs in total were £2m in 1970, £472m in 1980, £9.5bn in 1990, £22.5bn in 2000, and now, £53.7bn. When nuclear power was held up to the cold, hard light of the market, it proved to be uneconomic.”

Wind power has received a fraction of the financial support that nuclear energy has received – and yet wind can provide electricity at less than half the cost of new nuclear-power plants. According to the European Environment Agency, 80 percent of the total energy subsidies in the European Union is paid to fossil fuels and nuclear energy, while 19 percent goes to renewables. Moreover, wind energy has zero fuel costs, minimal waste-disposal and decommissioning costs, and a tiny fraction of nuclear power’s risk to human health or the environment.

Already, EU governments plan to meet 14 percent of the Union’s electricity demand with wind power by 2020. The industry believes that it can meet 50 percent of demand by 2050. With high oil prices, a higher EU carbon price from 2013, and the high cost of nuclear energy, onshore wind power is the most economically viable carbon-free power option.

Meanwhile, offshore wind is already competitive with new nuclear energy, and there are at least ten other renewable energy technologies that are smarter, cleaner, and less risky than nuclear power. Indeed, it is nuclear power, not renewables, whose future in Europe presupposes continued massive government subsidies.

In short, the answer to whether renewable energy can fill the gap left by declining nuclear power is yes. Europe does not need nuclear power to meet its future energy needs.

Christian Kjaer is CEO of the European Wind Energy Association.