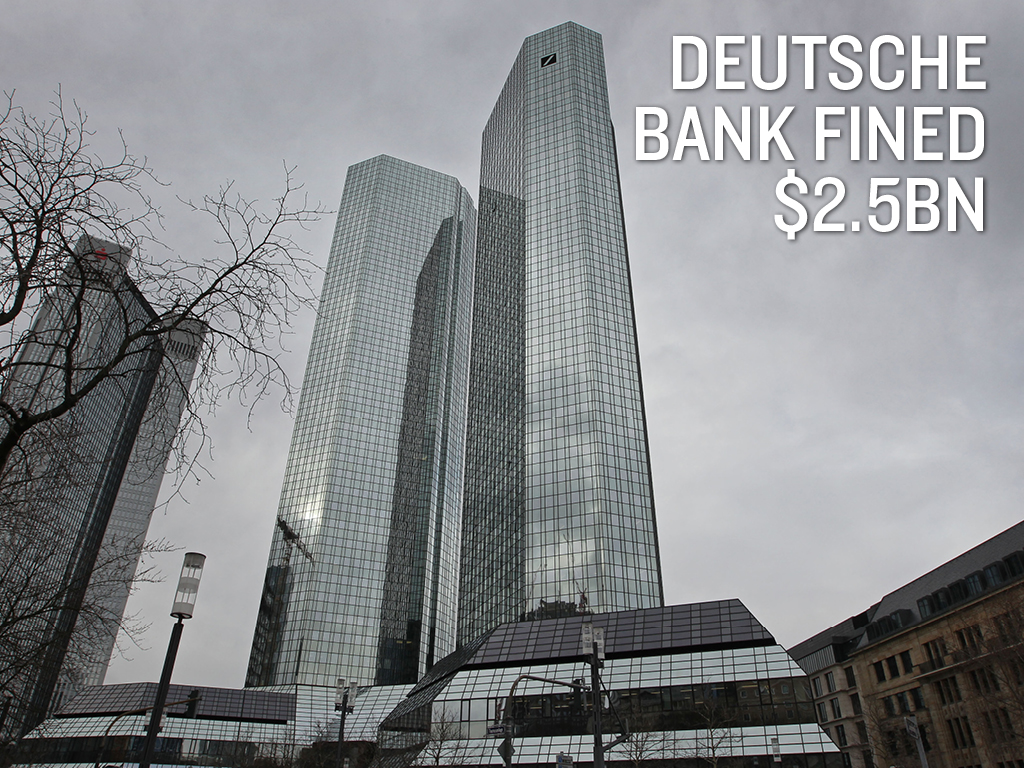 Deutsche Bank has agreed to pay a record fine to US and UK authorities for its role in the manipulation of the LIBOR benchmark lending rate. The Frankfurt-based bank will pay the sum of $2.5bn to a number of agencies; U.S. Commodity Futures Trading Commission, the U.S. Department of Justice, the New York Department of Financial Services and the UK Financial Conduct Authority. The bank has also been required to fire and ban the individuals involved.

Other banks such as UBS and Barclays have also faced heavy fines for their roles.

Other banks such as UBS and Barclays have also faced heavy fines for their roles.

The LIBOR is supposed to represent the interest rate at which banks lend from each other. It is also used to determine the cost of loans to businesses and consumers and the price of derivatives, as well as determine the health of banks.

Deutsche Bank, and the other financial institutions involved are accused of colluding to fix the LIBOR at rates which were beneficial to themselves. The collusion itself, rather than taking place in smoked filled back rooms, was largely carried out through online messengers, often in a friendly and colloquial manor.

The US Commodities and Future Trading Commission has published the correspondence between employees of the banks involved, requesting the LIBOR rate be set at a rate beneficial to themselves. “COULD WE PLS HAVE A LOW 6MTH FIX TODAY OLD BEAN?” wrote one London-based US Dollar trader. “LIBOR HIGHER TOMORROW?” requested a Dollar trader in New York, to a person the CFTC calls the US Dollar Libor Submitter, who responded to the all-caps request with “shouldn’t be.” The NY Dollar trader then replied, again in all capitals letters with “COME ON. WE ALWAYS NEED HIGHER LIBORS !!! HAHA.”