Marta Kowalska-Marrodàn, head of Egon Zehnder Warsaw, talks to Stephen Neale about why Poland's top managers are today among Europe's most successful 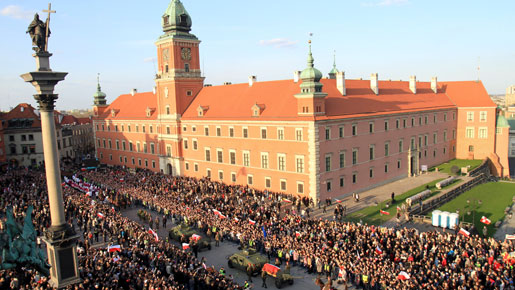 If there is something special about a country that thrives while others flounder – Poland can indeed lay claim to greatness. GDP grew by five percent in 2008 across Europe’s fastest rising economy. Poland is today the only EU economy to have made it through the global slump without contracting. As analysts predict trade is about to return to pre 2008 levels, it is the country’s corporate managers who are poised to contribute to expansion – at home and abroad.

Marta Kowalska-Marrodàn, head of executive recruitment firm Egon Zehnder Warsaw, says demand on management talent over the last 10 years has been a key driver to success, with many multinationals identifying a new talent pool.

Polish managers are increasingly part of the expatriate crowd with firms such as Tchibo, Metro, Danone, Carlsberg, Nike, Philips, Nestle, Novartis, Citibank, Sephora, and others.

“The demand for talent has been growing constantly as companies realise that quality management is a source of sustainable competitive advantage,” says Ms Kowalska-Marrodàn. “International education and experience, company training coupled with top level management education have helped Polish executives in sharpening their focus and outperforming those who failed to embark on the steep self-development course. The outcome is an excellent breed of conscientious, ambitious and well-prepared executives who are ready to conquer the world.”

But while it was once enough for a Polish manager to be intelligent and multi lingual, the skills have become more ‘sophisticated’ according to Ms Kowalska-Marrodàn.

This changed when companies began looking for managers with different abilities, depending on the industry or business. Ms Kowalska-Marrodàn says a ‘great achievement’ was to teach managers that they can make mistakes.

“You can always be right if you do nothing,” she says. “This was an issue. The message now is don’t be frightened to be wrong – be more audacious.” But are Polish managers really bolder and better prepared then their Western counterparts?

“To a certain extent yes,” says Ms Kowalska-Marrodàn, “because there is a constant quest for excellence and self development here in Poland. Other countries are not constantly upgrading their business skills. It may come from the fact we all need to catch up with the West after 40 years of communism. Polish managers do not rest on laurels. They are always on the run after new ways of tackling management challenges. This learning orientation makes them more successful than those who have ‘seen it all’, and who do not question status quo. In times of growth Polish managers are willing to take risks and venture into the unknown. In times of crisis they know to be humble and go back to basics.”

Female managers
The Egon Zehnder company adopted the fundamentals of ‘true collaboration’ from its foundation in 1964. Equality is one of those cornerstones, but it also stands firmly behind the traditional family model. Challenging the stereotypical role of women in Poland remains a burden for some female managers. Ms Kowalska-Marrodàn says although female executives are succeeding at various levels of management, many consciously chose to opt out from the career race and prefer the homemaking challenge.

“This should not be seen as a bad thing, though, but rather as an expression of freedom of choice. Today women go for a business career if they so wish, but they are not obliged to work, as was the case in the gloomy times of communist poverty.”

Some though have not embraced the 21st century approach of women’s solidarity in business.

“All too often women are competing with each other instead of working together to form their own business community,” says Ms Kowalska-Marrodàn “When visiting a client with one of my male colleagues, I see that the client’s female assistant first greets and welcomes my colleague and leaves me almost unnoticed. Unfortunately, women’s success in business here is still seen as a success in breaking into the ‘men’s world’, and is too often a solitary effort.”

History
But if companies in 2010 are looking for executives with experience of crisis management, Poland’s most recent history bodes well for future success. The first wave of crisis came in 1998 when managers were found wanting. The first decade of post communist growth was followed by economic contraction. Those who learnt from 1998 became the winners in the 2002 crisis, according to Ms Kowalska-Marrodàn.

“They knew the way out of recession meant making their companies leaner and more efficient, while looking for new alternative distribution channels and markets. We are much better prepared today than we were in the beginning of this decade,” she explains. “Understanding of value drivers is much deeper anchored in the DNA of the Polish management elite. We have had to look at new breed of managers and we had to look outside. Now we have known the full cycle.

“In 2002 it was more difficult for us. We now combine managing expertise to take responsibility at main board level, which we could not do before.”

Expansion
Expansion by Polish companies on the back of the country’s economic stability is expected, but not inevitable. The most natural route is to the East and across Central and Eastern Europe. Many have already ventured into Ukraine and into Russia. There are also companies who have successfully conquered the German market. In the furniture industry for example, Polish companies have secured competitive advantage. Not just on price, but on supply chain management where the largest clients demand seamless and timely deliveries.

Good services are allowing Polish companies to win big customers in specialised areas too. Niche sectors in particular, where industry expertise and individual passion count most, are where Polish entrepreneurs are succeeding. One example is HTL-Strefa, which has 70 percent share in the global safety lancet market.

“This is a good example of winning thanks to passion for quality and specialisation,” says Ms Kowalska-Marrodàn. “On the other hand, global expansion requires solid funding. And this is where many Polish companies may encounter substantial hurdles. But we can succeed through expertise and passion.”