Medical suppliers haven't been paid for as much as two years, emergency rooms have been shut down and doctors in Catalonia have been told to accept a pay cut 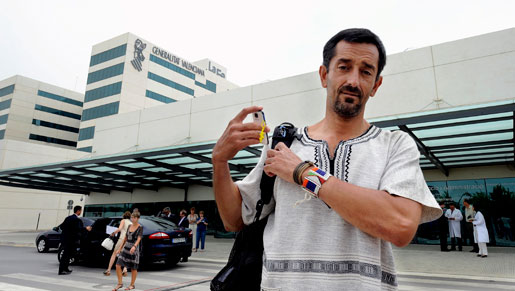 “We haven’t been paid, but there’s nothing we can do about it. We need the contracts, so we’re just going to have to wait it out,” said a representative for a cleaning company who did not want his or the firm’s name used for fear of a backlash. The company, which says it is owed hundreds of millions of euros by the government of the Castilla-La Mancha region south of Madrid, is one of dozens of providers of everything from surgical swabs to disinfectants struggling to pay workers as Spain’s regions delay payments to meet tight deficit targets.

The debt-burdened autonomous regions’ spending cuts are a tangible sign of the present and future pain as Spain works to meet ambitious deficit reduction goals pledged to the European Union in the midst of an economic downturn.

Spain’s political parties have kept their positions on the issue vague ahead of Nov. 20 general elections, but even the most passionate defenders of the current system agree there is scope for cost savings and more efficiency.

Spain’s conservative opposition, the People’s Party (PP), which is expected to win in November, will likely cut into social welfare programmes the incumbent Socialists have left untouched.

But even the Socialists now say they can find ways to reduce health spending without harming services. Examples include forcing car insurance firms to pay for the treatment of accident victims and sending foreign governments the bill when their citizens use Spanish hospitals.

900-day waits
Multinational pharmaceutical firm Roche says the Castilla y Leon region north of Madrid is more than 900 days behind on its bills, which has raised fears here that the company could start withholding drugs for some hospitals as it did in Greece, which is fighting off bankruptcy.

Spain’s central government makes yearly transfers of income tax revenue to the country’s 17 autonomous regions, which are in charge of administering health care and schools.

But the regions are being forced to make drastic budget cuts after piling up debt during Spain’s property boom, the collapse of which in 2008 sent the country into recession and unemployment soaring to more than 20 percent.

As the regions squeeze spending wherever they can, what they owe to companies that provide health care services and products has risen 42 percent in a year to more than €4bn, according to the Spanish Federation of Healthcare Technology, known as Fenin.

AT Kearney consultancy calculates the system’s long-term deficit is €15bn, a heavy burden for a government whose borrowing costs have soared in the euro zone debt crisis.

Margarita Alfonsel, secretary general of Fenin, says small companies in her federation “are suffering to an alarming extent due to the liquidity squeeze.” She said some will have to lay off staff or go into bankruptcy.

The average number of days providers must wait for payment has risen in the past year to 415 days, from 285 days, she said.

“We have to explain to our central offices that this is an ongoing problem in Spain made worse by the crisis,” he said.

Doctors fearing for their jobs
The government in Catalonia, Spain’s wealthiest region, has shut down some clinics and emergency rooms over the past few months and has said it will lay off 1,500 medical  residents if doctors refuse to accept pay and bonus cuts.

The residents in late September staged marches through the Catalan capital Barcelona and draped banners around hospitals, and doctors’ unions have threatened to walk off the job.

But many senior doctors are afraid to make a fuss and possibly lose their jobs when one in five Spaniards are out of work.

“All of this is because of years of mismanagement by the politicians. The money has run out,” said one Catalan doctor, who asked not to be named.

“We don’t know what is going on. We feel impotent to defend what we have. There is a huge fear of being sacked for doing so.”

Budget pressures are not going away soon. Spain’s economy cannot create jobs until it has sustained growth of two percent a year, which could be a few years away, meaning sky-high unemployment will drag on, restricting growth in income taxes. And, as in many other developed countries, Spain’s health system is burdened by an aging population enjoying long retirements on state pensions, while smaller families fail to fill the funding gap.

Unlike other countries with public health care, complaints about long waits to see a doctor are rare in Spain. But now patients in Catalonia are starting to have to wait and doctors warn the quality of care will decline.

“There will be less available budget for patients’ needs because we may find ourselves in a situation where we have to spend a lot of money correcting residents’ errors that could result from not having had the proper training,” said Jose Blanco, head of hospital education at German Trias Hospital.

Deeper cuts to come
Prime Minister Jose Luis Rodriguez Zapatero has almost certainly guaranteed humiliation for his Socialists at the polls by implementing a wide-range of budget cuts to avoid mass dumping of Spanish debt by international investors.

In August he passed a bill to save the public system over €2bn a year on drugs. Drug companies slammed the measure, which forces doctors to favour generic medicines over brand names, as inefficient, damaging to the system and badly thought out.

The PP, for its part, says the health sector must be reformed but are vague on details. Economists at conservative think-tanks that advise the PP have floated the idea of co-payments – where patients pay some of the bill to discourage overuse of the system.

The system, which is common in many developed countries but anathema in Spain, is favoured by almost 60 percent of doctors, according to a study by the Spanish Society of Primary Care Doctors.

Too good?
Spain’s health spending growth has slowed and what it spends on health care is in line with the average for developed nations at about 9.5 percent of GDP in 2009, according to figures from the OECD group of wealthy nations. The lion’s share, 73.6 percent, is funded by the state.

The system is so good and so cheap that many people use their private health insurance for routine care but head to a public hospital if they are diagnosed with a serious disease or condition.

Cutbacks in the public health care system will force some people back into the private system, which many see as inadequate.

Silvia Sanz, a 31-year-old teacher with type 1 diabetes, is planning to give birth at a public hospital after she lost her first baby at a private clinic just a month before her due date.

She has private health insurance but has been told the public system is best for a high-risk pregnancy and birth.

“In private, if anything goes badly, they don’t have the means to deal with it properly and, when you go back to them, they tell you you’re best to go public because they know they are better equipped to deal with complications than they are,” Silvia said.

Foreigners can walk into 24-hour community clinics around Spain and get first-rate emergency care. When they ask for a bill, all they get is a startled look from a nurse. There is no cash register in sight.

Some doctors admit the system is perhaps too gold-plated. “The Catalan health system has been excellent over the years. Perhaps too good. Foreigners only have to go through a little paper work and they are entitled to health care,” said Gabriel Olle Fortuny, a doctor at Barcelona’s Mataro Hospital. “We’ve been giving a quality we can’t afford.”