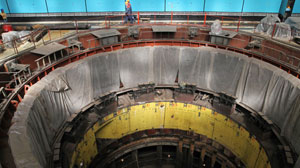 The government of Russia has set goals for enhancing the country’s energy efficiency over the next decade or so, with much of the focus being on the development of sustainable energy initiatives. The effort involves the participation of a number of private companies, some directly involved in research and development of energy alternatives and some focused more on the financing needed to promote these projects. While the goals are primarily aimed at creating energy supplies for use within the country, there is also some attention being given to the development of sustainable energy for export to other nations, providing the producers as well as the Russian government with additional revenue sources that would help to strengthen the national economy.

One supporter in the effort to develop sustainable energy resources within Russia is the European Bank for Reconstruction and Development. The EBRD launched a sustainable energy initiative in 2006, with the goal of investing in projects deemed viable and likely to generate acceptable returns, while also creating sustainable energy alternatives. The bank has provided funding for a number of projects in Russia, based on projections that the long-term return will allow the EBRD to support additional efforts in Russia and elsewhere, with relative ease. The support comes in the form of lines of credit for qualified businesses and organisations, as well as outright loans in some cases. Examples of Russian corporations to receive support from the EBRD include Russian Railways, European Bearing and Sibur Tyres Russia.

While the development of sustainable energy is still considered to be somewhat in its infancy in Russia, there are players who have emerged as leaders in the effort. OAO RusHydro is one such example; long involved in the production of renewable energy sources, the company is not only developing additional options within Russia, but also entering into strategic alliances with producers in other nations, including China, Spain and France. The outcome is a sharing of ideas and resources, along with energy production that is anticipated to aid in the development of sustainable energy, not only in Russia, but several other countries as well.

Both Rostechnologii and RusHydro have established a working arrangement with Siemens, with the goal of developing wind energy opportunities in Russia. This includes more effective means of energy storage as well as facilities to create the flow of energy. Zeyskaya HPP is a major player in the development of additional thermoelectric options, while INTER RAO UES OJSC focuses on the expansion of hydroelectric, thermal and nuclear power options.

Much of the governmental oversight and support for these efforts comes from three different agencies, an arrangement that is sometimes considered somewhat limiting. The agencies involved are the Ministry of Natural Resources and Ecology, the Russian Federal Service for Ecological, Industrial Production and Atomic Supervision and the Russian Federal Service for Natural Resources Management Oversight. Proposals for the development of a central agency to oversee sustainable energy growth within the country have been presented, but at present remain more a dream than a reality.