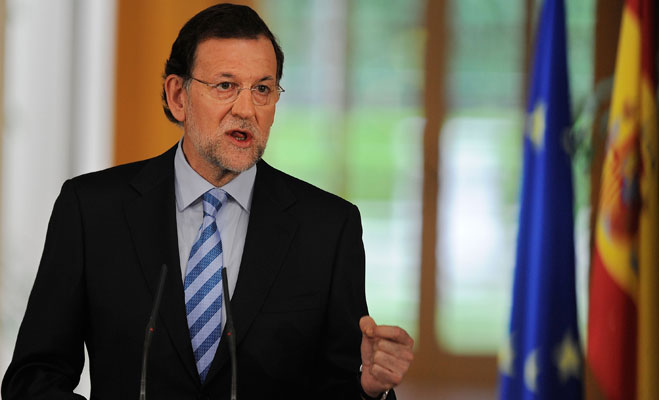 The bailout announcement came after a week in which Spain’s credit rating was slashed close to junk status by Fitch and the government’s borrowing costs rose about six percent at a 10-year debt auction.

Spain’s weakest banks had been left with billions of euros of bad loans following the collapse of a property boom and the subsequent recession. Leading lender Bankia had already called for a €19bn bailout, and Liberbank, Ibercaja and Caja 3 are set to merge after making heavy losses.

Prime Minister Mariano Rajoy refused to call the arrangement a bailout or rescue, preferring to term it a credit line.

He argued the deal with not come with the same stringent rules that the Irish, Greek, and Portuguese governments faced when they were bailed out by the eurozone.

The exact amount of emergency funding that Spain will receive will be decided after two audits of its banks are completed within the next few days. The bonds will come from the European Financial Stability Facility or its permanent successor the European Stability Mechanism, both of which are back by eurozone governments.

In early trading, the FTSE 100 in London rose 1.7 percent, the Dax in Frankfurt was up 2.3 percent, and Cac 40 in Paris was up 1.8 percent. Spain’s benchmark index, the Ibex in Madrid, rose 4.6 percent and the FTSE All-World equity index is up 1.2 percent after shares in the Asia-Pacific region surged 1.8 percent. Industrial commodities are also enjoying firm demand after Chinese data showed stronger than expected exports and weaker than forecast inflation, raising hopes Beijing could continue to loosen monetary policy if required.

Spain’s economy is expected to shrink by 1.7 percent this year. “Some much-needed time has now been bought in Spain, which will allow the market at least a temporary sigh of relief,” said a spokesperson from Hargreaves Lansdown stockbrokers.