Why UK graduates are the most indebted in the developed world

An IFS report has found the mounting cost of UK tuition fees has left three-quarters of students saddled with debt, creating risks for the UK economy 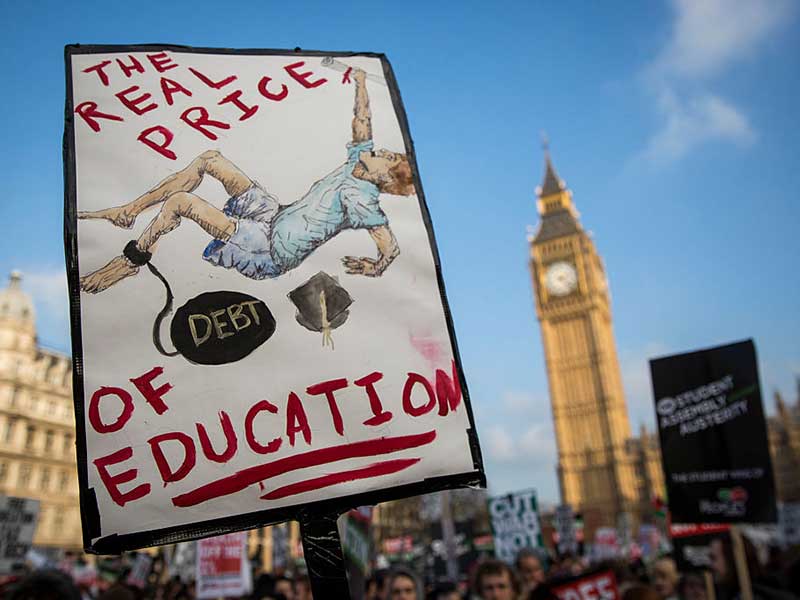 A report released by the Institute of Fiscal Studies (IFS) on July 5 found English graduates shoulder more student debt than any other in the developed world, with those from the poorest backgrounds saddled with an eye-watering £57,000 (€65,000) of debt in exchange for a three-year degree.

On top of this, the maintenance grants provided to students from the poorest backgrounds were scrapped and replaced with loans in 2015. This has left the poorest students footing the largest bill, and means 96 percent of all government backing now comes in the form of loans.

Changes to interest rate structures in 2012 also mean the cost of the loan starts to mount before students have even graduated, adding an extra £5,800 (€6,610) to the bill during their studies. The recent changes also included an extension of the repayment period; outstanding costs will now only be written off after 30 years, a five-year increase.

If future governments are unable to recoup the loans under the new structure, the move will only act to tear a hole in public finances further down the line

Interest payments are now dependent on graduate earnings, a factor the IFS believes creates “significant variation in graduate contributions, with the highest earnings paying considerably more than the lowest”. An increased payback period, coupled with new interest rules, means high earners will pay back £40,000 (€45,610) more under the new system.

By swapping grants for loans and increasing fees, the UK Government has reduced higher education’s contribution to the deficit by £5.7bn (€6.5bn), around 10 percent of the total deficit. This is largely due to the fact maintenance loans count towards the deficit, while loans do not.

However, if future governments are unable to recoup the loans, the move will tear a hole in public finances further down the line. With fees continuing to rise, the IFS highlighted the increased risk of unpaid loans: “The long-run contribution is now heavily dependent on graduate earnings… if graduate earnings are two percentage points lower than expected, the long-run government contribution increases by 50 percent.”

Further, the change to the loan structure removes any incentive for universities to provide economically valuable STEM courses. The report found that due to the flat tuition fee system currently in place, universities tended to focus on providing lower cost courses in the arts and humanities, increasing profit.

The report concluded bringing fees back down to previous levels could help offset some of these risks. While this would increase the current budget deficit and taxpayer contribution in the short term, the government could use the money currently allocated to fund the costs of low earners to promote STEM subjects or fund students from low-income households.