A new Städel for Frankfurt

Jo Caird visits The Städel and speaks to its director Max Hollein, who has overseen a complete regeneration of the venue over the past few years 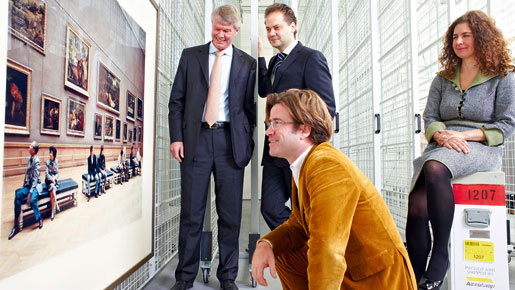 It is the day before the re-opening of the Garden Wing of Frankfurt’s Städel Museum and the place is a hive of activity. The launch of ‘Art of the Modern Era’, the museum’s display of art from 1800 to 1945, is just the first of the three major inaugurations taking place over the following weeks and months. The Städel, which was founded in 1815 when banker Johann Friedrich Städel bequeathed his art collection and fortune to the citizens of Frankfurt, has spent the past two years undergoing the largest expansion in its history.

Following the re-opening of the Garden Wing in November and the Main Wing, home to the museum’s Old Masters collection, in December, February sees the most exciting launch of all: that of an entirely new building beneath the garden that will house the museum’s collection of contemporary art.

I am here to meet Max Hollein, the museum’s director since 2006 and the man responsible for this extraordinarily ambitious programme of works. Born and raised in Vienna, the son of acclaimed Austrian architect Hans Hollein, the Städel’s director was a project manager for the Solomon R. Guggenheim Foundation in New York before relocating to Frankfurt in 2001 to take over the directorship of the Schirn Kunsthalle. He now heads both institutions, along with the Liebieghaus sculpture collection, which is located just along the Main River front from the Städel.

Hollein’s office looks out over the museum’s garden, a space that since the expansion bears more than a passing resemblance to the set of the late-nineties children’s television series Teletubbies. The grass of the garden covers the gently sloping roof of the new 3,000 square metre underground gallery and the 195 circular skylights punctuate the dome-like mound. Such is the quantity of natural light streaming down, it is almost impossible to believe that one is in a basement when standing in the new space.

A strong bank of art
The plans for the expansion began to take shape shortly after Hollein took up his post at the Städel, with the launch in autumn 2007 of an international competition to find an architect for the project. In early 2008, Frankfurt firm schneider+schumacher was chosen by the jury and ground was broken on the site in autumn the following year.

It has been possible to complete such an ambitious project in such a short time frame, Hollein says, because of the unorthodox way in which the Städel went about running the architectural competition, achieving the necessary funding targets and enriching its collections with works from corporate art collections and other collectors. “It was a kind of a puzzle that came together… doing the competition and simultaneously negotiating with the corporate collections, sometimes pretending that the other thing was happening, basically juggling these balls… The competition was done not only to find a project, but also as a significant step to signal to all these people, some of them obviously sitting on the fence, that we were moving forward at an aggressive speed.”

The total bill for the project, which includes the expansion and renovation of the existing 19th-century buildings, comes to over €50m, with funding coming from both the private and public sector. Deutsche Bank has donated 600 works, the vast proportion of which are German paintings, drawings and prints from the second half of the 20th century. DZ Bank has also given generously, transferring over 200 rare and important photographs from its renowned contemporary photography collection.

Hollein acknowledges that fundraising in the current financial climate has been “challenging from the very beginning”, but the director feels very strongly “that there is a responsibility of this generation, even in difficult times, to continue building what other generations have done before, in this case here at the Städel”. He’s talking not just about corporate social responsibility – although that’s clearly a major issue here – but about ordinary people acknowledging the importance of institutions such as the Städel as part of the “social fabric of the whole region”. For Hollein, public sector funding is by no means the only route to success in the arts.

Supporting the arts
We move over to the model of the new garden gallery, a shallow white box that takes up a quarter of Hollein’s large oblong office. Its walls, no more than 30cm high, are covered with what are essentially fridge-magnet versions of the 400 works (selected from the 1,500 or so pieces that make up the whole contemporary collection) that will form the first permanent exhibition in the new space. Gazing at the miniature artworks, giving the model a dolls’ house feel, are tiny plastic people. Works whose position in the hang has not yet been decided are scattered across a board that hangs on the wall above.

Describing the process of putting together the hang, Hollein’s eyes light up. “You create a narrative about certain developments of the art of the last 50 years. It would probably take us too long to give you a virtual tour, but there are certain pieces that would connect and would give you a sense of developments that started even in the 1930s and have been mirrored and advanced through the stages.”

The gallery will remain unchanged for around a year to 18 months after its opening on 22 February, Hollein explains, after which the space will be redesigned (most of the internal walls are temporary). The resulting new hang will include both works from the opening display as well as around 200 unseen pieces selected from the museum’s stores.

For the moment, though, Hollein and his team are focusing all their energies on the immediate future. “This institution will be completely exhausted, physically but also financially, when we open it, so I think there will be a moment of a year where we won’t take down the walls!”, Hollein says. And with that our interview is over and I leave the director of three top Frankfurt cultural institutions to yet another very busy afternoon.