In light of Apple’s decision to break up iTunes into separate music, TV and podcast apps, here is a retrospective look back at the influential online music store 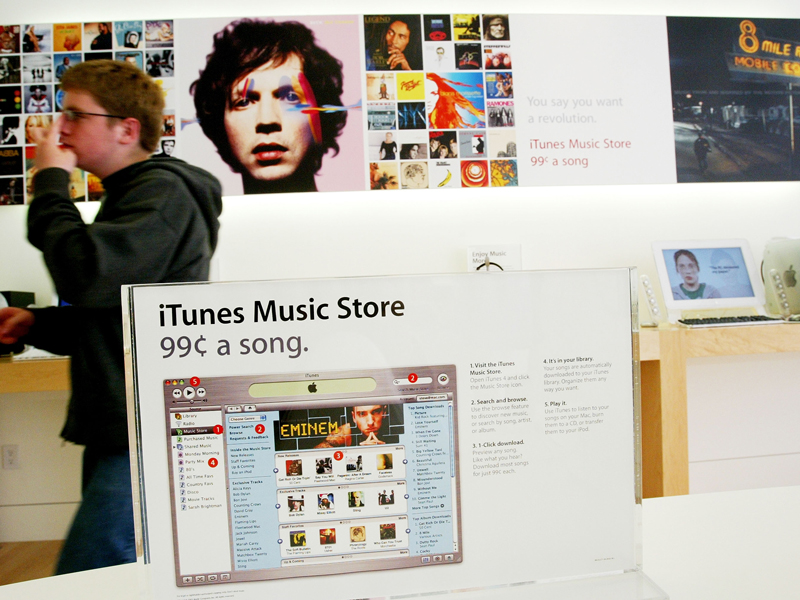 Apple launched iTunes in 2003 as a supporting program for the iPod. Now, streaming services are king and Apple want a second bite of the apple
Lifestyle

When Apple first unveiled iTunes alongside its inaugural iPod in 2001, the company wasn’t interested in selling music. The music player was a way for users to manage their own albums and upload songs onto their MP3 player. “What [Apple] wanted to do was sell iPods,” said Chris Cooke, Founder and Managing Director of CMU, a consultancy and news service for the music industry. “To do that, it needed to provide iPod owners with a legitimate way to access pop music in a digital format.”

In 2003, the tech giant introduced the iTunes Music Store, and the way people around the world bought and listened to music began to change. At the time, the store offered 200,000 songs for download at $0.99 (€0.89) each. Within the first week, more than a million songs were sold.

Nearly two decades since its launch, iTunes has helped to transform the global music industry. But as Apple looks to break the once-powerful music store up into newly designed apps for music, TV and podcasts, it is clear that the relevance of digital downloads is fading.

Creating a hit
The iTunes store was not the first site to offer digital downloads, but, Cooke told European CEO, it was the first service that “truly captured the imagination of music fans and demonstrated that digital – which had often been seen as a threat for the traditional record industry – was also a major opportunity”.

The bigger iTunes grew, the less functional it became for users

Napster, the file-sharing service that became famous for music piracy scandals, debuted in 1999. By 2001, it had a verified 26.4 million users, though some estimates put it at 80 million, according to a report by The Guardian. ITunes, meanwhile, created a model for legitimate download stores. “ITunes allowed the industry to regain control while it adjusted to changing behaviours,” said Rebecca Crook, Chief Growth Officer of Somo, a global digital product agency. “It offered labels and individual artists a huge digital platform that allowed them to easily add additional content… and monitor sales and plays digitally.”

The iTunes revolution really took off later in 2003 when the platform became available for download on Windows as well as Apple’s operating system, making it a more universal application. But many artists did not appreciate iTunes’ ‘à la carte’ approach, which allowed users to buy music track by track, or the fact that the company refused to sell songs at more than $0.99 (€0.89) apiece.

But, despite protests from the record industry, digital downloads became a rare source of hope amid sinking revenues. In 2001, global digital downloads accounted for just $400m (€359m), but by 2012 downloads generated $4.4bn (€3.95bn), according to data from the International Federation of the Phonographic Industry (IFPI).

“By the late 2000s, the iTunes store was booming. From a global perspective, it was more significant in some markets than others, but in the UK and the US in particular it provided a crucial growth revenue stream after years of declining CD sales,” Cooke said.

A sour note
ITunes expanded to include more and more functions and add-ons over the years, but the bigger it grew, the less functional it became for users. The app was bogged down with its numerous functions: not only was it an online store for digital music, film and book downloads, but it was also home to a short-lived social network called Ping, the recommendation feature Genius and the iPhone management centre. One update after the next created a labyrinth for users. “ITunes became fairly clunky, slow, confusing and lacking in further innovation,” Crook said.

In 2015, Marco Arment, an iOS developer known for co-founding the social network Tumblr and creating the bookmarking service Instapaper, wrote that iTunes had become a “toxic hellstew”. He added: “ITunes’ [user interface] design is horrible… not because it has bad designers, but because they’ve been given an impossible task: cramming way too much functionality into a single app while also
making it look ‘clean’.”

While the iTunes-induced boom in digital downloads was not enough to save the record industry’s struggling revenues, the rise of streaming services has put the industry back on its feet

At a company renowned for its strong designs, iTunes has long been a bloated and unwieldy outlier. So it was no surprise when Craig Federighi, Apple’s Senior Vice President of Software Engineering, announced at the 2019 Worldwide Developers Conference that the firm would bring iTunes to an end. The platform’s functions would be broken up into separate music, TV and podcast segments, which users would access through independent apps: Apple Music, Apple TV and Apple Podcasts.

“It was a positive decision for Apple to break iTunes up, as it shows an understanding that they need to continually change to suit shifting behaviours, trends and tastes,” Crook said. “We’re now mobile-first and iTunes was never equipped for this – it was developed for our desktop computers and then adapted. Therefore it was always retrospectively trying to fit into the mobile journey
rather than leading it.”

The decision also came at a time when the relevance of digital downloads was declining. In its Global Music Report 2019, IFPI found that digital download revenue fell 21.2 percent in 2018, to account for just 12 percent of the industry’s total revenues. For Apple and the music industry more widely, the focus has turned to streaming. “With hindsight, the iTunes store model was probably always destined to be a temporary stepping stone as the record industry moved from a physical to a digital business,” Cooke said.

Change of tune
While the iTunes-induced boom in digital downloads was not enough to save the record industry’s struggling revenues, the rise of streaming services has put the industry back on its feet. Four years ago, the recorded-music industry returned to growth after around 15 years of decline. In 2018, streaming accounted for nearly half of the revenue generated by the industry, having grown 34 percent year-on-year to $8.9bn (€7.99bn), the IFPI found. The same year saw a 33 percent rise in paid subscription streaming. As of the end of 2018, 255 million users were paying to stream music.

Compared with Spotify and YouTube, Apple was relatively late to the market with its own streaming music service: Apple Music only launched in 2015. However, Cooke said, with its established iPhone and iTunes user base, Apple had a leg up. “Which is why it isn’t surprising that Apple quickly became a big player in streaming,” Cooke said. Although Spotify is bigger on a global basis, Apple has won over the US market: The Wall Street Journal reported in April that Apple Music, which does not offer a free service, had overtaken Spotify in terms of paid US subscribers, with 28 million compared with 26 million subscribers.

Nabbing the US market was a big win for Apple as it works to grow the services side of its business, but Spotify still has nearly double the amount of global paying subscribers. “Apple would need to do something really compelling and different to be able to keep up with this,” Crook said. “However, if anyone could do it, Apple has a fighting chance.”

ITunes was a revolutionary in the music industry, and although Apple Music has made somewhat less of a mark, streaming is certainly not the end of the sector’s transformation. For instance, Cooke said, the impact of Alexa-style voice controls on music consumption is a “big talking point” in the industry today.

Although streaming has provided more opportunities in the digital space for artists and labels, Cooke said: “It remains as challenging as ever for new artists to find an audience and build a business around their music.” Streaming services such as Spotify and Apple Music may be the stepping stone to something even bigger. “But wherever things go next, iTunes will always be the brand that kick-started the digital music revolution,” Cooke said.