Through Spotify, Daniel Ek has changed the music industry forever

Developed to bridge the gap between illegal file sharing innovation and a behind-the-times record industry, Spotify is conducting a delicate balancing act. CEO Daniel Ek needs to keep all parties happy ahead of the company’s anticipated IPO 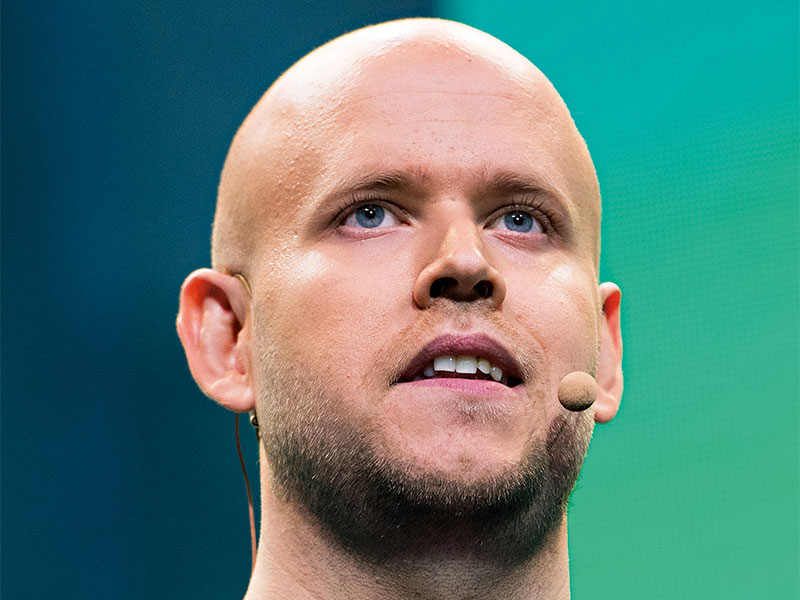 Though he has yet to lead Spotify to profitability, Ek has revolutionised the music industry
Profiles

Sweden has a dark past when it comes to digital music. The country has been home to some of the biggest illegal media sharing networks in the world, including Pirate Bay. A report compiled by Sweden’s Film and TV Industry Cooperation Committee suggested 280 million films or TV shows were illegally viewed in the country during 2014.

This content was valued at approximately $100m; around a quarter of the total value of the country’s entire TV and film industry. Sweden’s early adoption of broadband internet gave the average person enough bandwidth to upload and download whatever they wanted. By the time file sharing eventually spread worldwide, piracy had already become entrenched in Sweden.

However, the country is also home to a force that might just save the music industry. Spotify has struck a balance between give and take; by giving people the minimum functionality of their service for free, the company won over millions of paying subscribers, willing to shell out for the complete package. For only €9.99 a month, unlimited music streaming across a range of devices makes for a compelling alternative to digging through virus-ridden file sharing sites.

What’s more, Spotify’s success has propelled CEO and founder Daniel Ek into the highest sphere of tech champions, standing shoulder to shoulder with Silicon Valley’s biggest names of the last few decades. As the company stands at the brink of going public, Spotify and Ek are in the process of finalising a number of details before taking the plunge.

At the same time, with competitors emerging and a still-unproven business model in terms of generating profit, Spotify does face a number of challenges on its path to becoming the world’s dominant music streaming service.

Plugged in
Ek’s experience in the tech industry goes back to the age of 14, when he started his own small business making commercial websites in his school’s computer lab. Charging far less than the average web design agency, he quickly amassed a small fortune. Unable to keep up with the workload, he trained his friends to code and quickly built a business taking in $15,000 every month. At 16, he applied to be an engineer at Google, but was told to come back after earning a degree.

After leaving school,
Ek worked for advertising network Tradedoubler, building a tool that could analyse the company’s contracted sites

Following this advice, Ek enrolled at Sweden’s Royal Institute of Technology to study engineering, but then dropped out after just eight weeks when he realised his first year would focus solely on theoretical mathematics.

After leaving school, Ek worked for Stockholm-based advertising network Tradedoubler, building a tool that could analyse the company’s contracted sites. Ek’s solution was so effective he was paid $1m for the rights to it. He earned even more selling patents, becoming a self-made millionaire by the age of 23.

However, this success did not result in happiness. “I was deeply uncertain of who I was and who I wanted to be”, Ek said in a 2012 interview with Forbes. “I really thought I wanted to be a much cooler guy than what I was.” Dissatisfied with the lifestyle his fortune had bought him, Ek moved to a cabin near the Stockholm suburb of Ragsved and contemplated a career in music.

Around the same time he started socialising with Tradedoubler CEO and Silicon Valley veteran Martin Lorentzon. As their friendship developed, the two came up with the idea of going into business together. By 2006, Ek had convinced Lorentzon to leave his job at Tradedoubler and invest in a new business, aimed at disrupting both the tech and music industries.

The idea, Spotify, was meant to make paying for music an easier option than piracy. With both a paid and free tier, Spotify aimed to lure people in and convert them to paid subscriptions through the extra functionality offered by the higher tier membership. But for the idea to work, Ek and Lorentzon would need access to a vast catalogue of music.

Industry blues
For a long time, Spotify was not much more than a cobbled together prototype. In order for the service to start strong, Ek primarily focused on securing rights from a significant number of record labels, rather than just one or two. An incomplete catalogue would almost certainly prevent the service taking off.

As a result, the company spent years burning through cash while trying to secure licences. Rather than acquire global rights, which proved impossibly expensive, Spotify focused on Europe. It took a custom build of the program loaded with pirated tracks to finally convince record labels to sign up. The service went live on an invitation-only membership basis in Scandinavia, France, Spain and the UK in 2008. The service expanded quickly, but music licence negotiations slowed its pace; Spotify only made its way to the US in 2011.

In a 2013 interview, Thom Yorke of Radiohead and Atoms for Peace described Spotify as “the last desperate fart of a
dying corpse”

The service emerged at a time when the industry was undergoing a shocking decline in revenues due to significant changes in the way people listened to music. With the advent of portable MP3 players, digital tracks became the primary audio format. Such radical changes had been experienced before, but this time the record labels missed out on the cash injection that usually followed.

When people made the jump from vinyl to tape, and tape to CD, they often found themselves replacing a significant portion of their collections; converting a cassette tape to a CD was far harder than just buying another copy of a record.

Where these past changes bolstered the revenues of the music industry, digital tracks had the opposite effect; people could easily transfer their music collections from CD to computer, which had the added effect of opening up a number of new ways to share collections. Piracy emerged as a result of this facility, with services such as Napster and Limewire making it trivially easy to share tracks and albums online.

On the back of this shift, the iTunes Store launched in 2003 as a way of encouraging people to pay for digital music. However, iTunes allowed people to purchase individual tracks, meaning record labels were unable to rely upon the more lucrative whole-album sales on which they had previously relied.

This all had a profound effect on the industry. According to the Recording Industry Association of America, music sales sank from $14.6bn in 1999 to just $6.3bn in 2009. Not only were people not updating their formats, but whatever purchases were made were far smaller than before. While a resurgence in vinyl sales has helped the industry a little, the highs of previous decades will never again be reached.

Spotify’s intention was to bridge this gap between consumers and artists, effectively filling the hole piracy and digital album sales had created. “Napster, as a service, worked for the consumer. What eventually killed it was that it didn’t work for the people participating with the content. The challenge here is about solving both of those things”, Ek said in an interview with Bloomberg in 2011. Despite these good intentions, however, Spotify remains a contentious service among artists.

Impoverished artists
Spotify’s future hinges on whether it can reach a balanced agreement with record labels and the artists it hosts. The service is fast, efficient and effective, but without a large catalogue that means nothing. Because of this, Spotify has received severe criticism from many artists.

In a 2013 interview, Thom Yorke of Radiohead and Atoms for Peace described Spotify as “the last desperate fart of a dying corpse”. Atoms for Peace’s 2013 album Amok is still not available on the service. Jay Z, owner of rival streaming service Tidal, has pulled a significant portion of his discography from Spotify, and Taylor Swift famously removed her catalogue in 2014. Since Spotify is reliant on having a large selection, the loss of each big artist comes as a heavy blow.

The core of many of these artists’ criticisms is the relatively low amount Spotify pays them. While extremely variable, this year artists’ rights blog the Trichordist calculated Spotify pays out approximately $0.00437 per stream.

Pressure from artists and record labels has been taken on board by Spotify, and ultimately prompted a significant change in the company’s policies. In April, Spotify reached an agreement with Universal Music Group (UMG) that allowed new albums to be restricted to premium subscribers for up to two weeks after release. In exchange for this compromise, UMG agreed to slightly lower royalties.

If you’re the smallest, strangest musician in the world, doing something that only 20 people in the world will dig, Spotify can find those people

“We know that not every album by every artist should be released the same way, and we’ve worked hard with UMG to develop a new, flexible release policy”, said Ek in a statement released at the time. These compromises are paying off; Taylor Swift has since allowed her music back on the service.

Another challenge for Spotify is maintaining the lead it currently holds in the streaming market as more and more competitors emerge. The aforementioned Tidal asks for a larger monthly subscription but promises a fairer deal for artists and better sound quality. Amazon and Google have competing services, and Berlin-based Soundcloud now also boasts a paid tier. In terms of ad-supported music streaming, YouTube has Spotify well and truly beat, with music video streams well outstripping Spotify’s market share.

However, perhaps most worrying for Spotify was the launch of Apple Music in 2015, a competitor that comes built into the world’s most popular smartphone. Should it come to an all-out price war, Apple could afford to burn much more cash than Spotify.

Future sounds
An area where Spotify does have a distinct advantage over its rivals is its discovery tools. By looking at playlists created by the Spotify community and analysing the music tastes of an individual user, Spotify has created a range of complex algorithms to find tracks a user might like.

“We now have more technology than ever before to ensure that, if you’re the smallest, strangest musician in the world, doing something that only 20 people in the world will dig, we can now find those 20 people and connect the dots between the artist and listeners”, said Matthew Ogle, the man in charge of Spotify’s Discover Weekly feature, in a 2015 interview with Quartz. Spotify will need to find more differentiating factors like this in order to win over subscribers.

The next big step for Spotify is a highly anticipated IPO, and ahead of this the company has to show its funding model works. The challenge for every streaming service has been finding the right balance for licensing agreements; how much to pay out versus how much comes in. While Spotify generated revenues of $2.12bn in 2015, the company’s losses totalled $188.7m. While these compromise deals will help, Spotify will need to add a lot more customers in order to reach profitability.

The history of tech is littered with examples of companies that were the first to an idea, but not the most successful at executing it. This is the danger Spotify faces. That said, the company has shown a willingness to adapt and make its model work. Ek is clearly focusing on putting the company in the best possible position to be profitable ahead of its IPO. Whether successful or not, Spotify has forever left its mark on the music industry.