Super-fast, super-luxurious and high performing, the new generation of electric cars has arrived and the ultra-rich don’t want to be left out 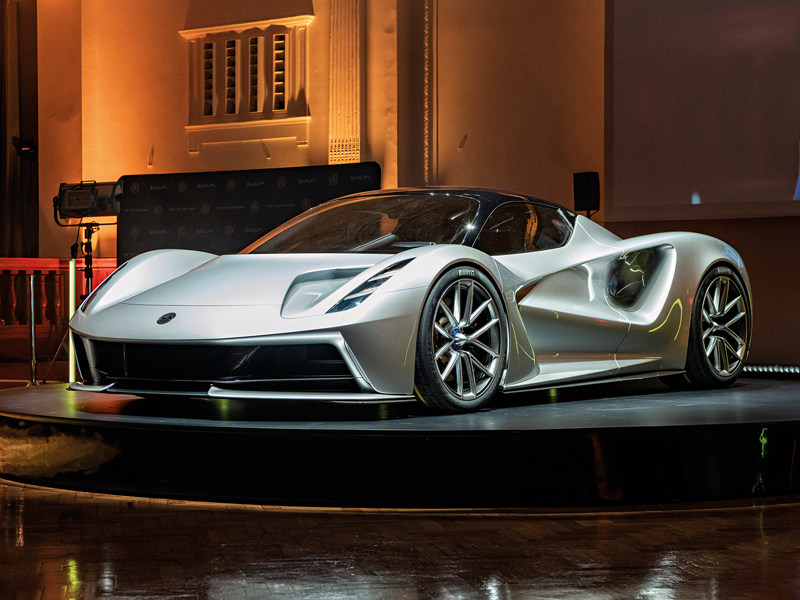 Weighing only 1,680kg, the Evija goes from zero to 60mph in under three seconds and has a top speed exceeding 200mph
Lifestyle

Arguably, the electric vehicle boom all started with Elon Musk, CEO of Tesla. Before the multi-capable tech entrepreneur set his sights on electric cars, they were viewed by most as dull, slow and unappealing. But a combination of Musk’s charisma and the growing choice of sleek, high-speed designs offered by Tesla has transformed their reputation – now, other market players are following Tesla’s lead and bringing their own electric models to consumers.

Role model
While there is a growing number of all-electric cars on the market, of the ones that are available today, the most sought-after is Tesla’s Model S. The Ludicrous Performance model can go from zero to 60mph in just 2.4 seconds and, thanks to a software update that Musk revealed in March, has a top speed of 155mph. The Model S has two motors – one in the front and one in the rear – while torque is digitally and independently controlled, giving it supreme traction in all conditions.

The result is a car that isn’t compromised in terms of speed or performance because it’s all-electric. Add in all the environmental benefits of going electric, and it’s easy to understand the growing appeal for consumers. John Smith, a business owner and vehicle enthusiast who spoke to European CEO using a pseudonym, said of Tesla’s car: “My Model S was purchased in addition to the petrol cars I own so I could begin benefitting from various key factors that directly impact me: free supercharging, no more visits to the petrol station and no congestion [charges]. I like the fact that you can charge overnight, as well as all the cost savings in terms of maintenance, charging, congestion, MOT, etc.”

Electric cars today are a far cry from the days of slow and boring designs, which saw them bought almost exclusively by those with environmental concerns

Of the car’s performance, Smith said: “The driving experience is impressive and, with the configuration options available on these cars, they can be made to feel almost like a petrol car.” He added: “The non-existence of gear changes and the lack of sound takes some getting used to, and are perhaps disadvantages for some, although these may be addressed in the future via hardware and software enhancements.”

Electric powerhouse
In July, British automotive company Lotus revealed one of the most anticipated new cars of the year – the all-electric Evija. With a target power output of 2,000 horsepower, it’s the “most powerful series production road car in the world”, according to a company press release. The Evija goes from zero to 60mph in under three seconds and has a top speed exceeding 200mph. According to the press release, it’s also the world’s lightest electric hypercar, weighing in at 1,680kg, thanks to a carbon fibre monocoque.

When asked about the motivation for creating an all-electric hypercar, a Lotus spokesperson told European CEO: “The Evija will act as a halo for our planned range of new performance cars. It communicates a future design language, reminds people that Lotus is a global performance car brand and, perhaps most of all, it shows that Lotus is back.” Production starts next year, but only 130 will be made; the model’s exclusivity, along with its £1.5m (€1.64m) price tag, makes the Evija highly enviable for the ultra-rich.

Electric cars today are a far cry from the days of slow vehicles and boring designs, which saw them bought almost exclusively by those with environmental concerns and dismissed by buyers looking to own a car that would act as a status symbol. As a result of technological advances, a growing appetite from consumers and manufacturers’ willingness to make bold moves, electric vehicles are leaps and bounds ahead of what we even thought was possible in the not-too-distant past. “The latest generation of electric powertrains offer levels of performance that internal combustion engines are simply unable to match,” the Lotus spokesperson said. “The pure electric powertrain in the Evija has been developed with an unwavering passion to push boundaries, explore new ways of thinking and apply groundbreaking technologies.”

Design kings
Lotus isn’t the only car manufacturer to go hyper in the all-electric market. Stealing the spotlight at the Geneva Motor Show in March was Pininfarina’s fully electric supercar, the Battista. If the name Pininfarina sounds familiar it’s because the Italian design company is behind some of the most beautiful cars of the past century – from the Alfa Romeo Giulietta Spider to the Ferrari Daytona and the Dino Berlinetta Speciale. The Battista marks the company’s first foray into producing its own cars. At speeds exceeding 218mph, the Battista is faster than a Formula 1 car and yet produces zero emissions. It can also soar from zero to 60mph in less than two seconds thanks to its 1,874 horsepower and 2,300Nm torque. The car costs £2m (€2.19m) and only 150 are being made, with an equal number allocated to Europe, North America and the Middle East and Asia markets. Those wishing to own one must apply.

Michael Perschke, CEO of Automobili Pininfarina, told European CEO that there are three elements to its appeal: “[Firstly], it is a classic Pininfarina where an elegance of shape and form clothes innovative engineering – neither form nor function dominate as both are equally as important as the other. Secondly, there is a simplicity and purity to the design of the car that, we believe, makes it incredibly desirable. Thirdly, it has not been styled to shout ‘I am electric’, because zero-emissions pure-electric power is a given for us. First and foremost, it has to be beautiful.” With Pininfarina making its first own-brand car all-electric, the legendary designers are demonstrating just how desirable electric cars have become.

Also at the Geneva Motor Show, Aston Martin previewed its new super-luxury electric ‘stretched SUV’, the Lagonda All-Terrain Concept, which it claims is the world’s first luxury electric vehicle concept. It’s an all-terrain vehicle with zero emissions that many are calling the ‘future of SUVs’. By removing the combustion engine, drive line, fuel tank and exhaust system, Aston Martin is able to provide a significantly more spacious solution than what’s currently available in the luxury car market. Its two electric motors are mounted on the floor – one on each axle – freeing up even more space, which, together with the Lagonda’s ultra-long wheelbase, creates far more internal volume than a traditional car.

Another key feature that moves away from traditional vehicles is the use of alpaca fibre, cashmere, silk and crystals in place of woods and leathers. The Lagonda also has a voice control system, rotating front seats and uses the latest in autonomous vehicle technology. Its aerodynamic design prolongs battery life, while its bonded aluminium structures make it lightweight. Even the key has been elevated: “Thanks to the wonder of electromagnets, the key floats when it is placed in position, levitating between the front seats,” reads the Aston Martin website.

Though production isn’t set to start until 2022, the Lagonda demonstrates the luxury heralded by the electric car industry. It also highlights how much more freedom designers have; the future of the luxury car market is bound only by their imaginations.

Thanks to the likes of Aston Martin, Lotus, Pininfarina and Tesla, electric cars have a new status in the motoring world. Going electric isn’t just good for the environment: in terms of speed, comfort, luxury and style, all-electric vehicles are pushing boundaries in all areas of the car industry. We’re only beginning to see what this exploding market has to offer.