Turmoil brewing in Greece could slow the ECB's withdrawal of its extra liquidity measures, especially if other countries become infected with similar woes 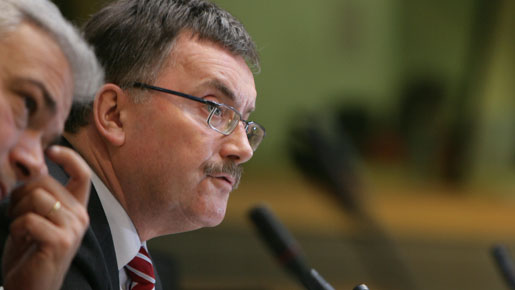 Some analysts even speculate a north-south divide could develop within the ECB on how to approach a growing crisis around the public finances and recovery of the currency bloc’s more indebted southern European states.

Greece has been pounded by financial markets after revealing its 2009 budget deficit was 12.7 percent of the GDP, more than four times the EU ceiling of three percent and three times initial estimates.

The premium investors demanded for holding Greek 10-year bonds rather than German Bunds hit a euro lifetime high of around 405 basis points last Thursday, and some worry about its ability to attract investor money and that such concerns could slow the removal of the ECB’s liquidity measures.

When the financial crisis intensified in September 2008, the ECB started slashing interest rates and offering banks unlimited liquidity at fixed rates and for longer maturities.

As the economic freefall ended and banks stabilised, in December it took the first steps to rein in that policy and Executive Board member Juergen Stark has said decisions about further withdrawal would be made on a quarterly basis.

But public finances in many countries have been hit hard by extra stimulus spending and worries about governments’ ability to service higher debt loads are increasing.

If the ECB ends its “full allotment” policy and returns to auctions, these concerns would be exacerbated, and making money less available would also push up market interest rates and clamp down on liquidity that banks need to lend on to firms and households, a vital prop to the economic recovery.

“If we are going to have Greece on the verge of a debt crisis … this is of course something the ECB keeps in mind when setting its monetary policy or its policy of liquidity withdrawal,” Unicredit economist Marco Valli said.

“If we see severe tensions in the periphery, that is something the ECB will look at carefully and it certainly will have an impact on the timing and the speed at which they will withdraw liquidity.”

Spillover fears
Governing Council member Axel Weber said last week policy cannot be tailored to suit troubled members and that the ECB could remove more of its crisis support in coming months. He has also hinted unlimited tenders at fixed rates for longer operations might be the next ones to go.

But events could force it into a slower removal of accommodative measures.

Were Greece’s problems to spill over to other countries, with implications for regional economic growth as well as banks, the ECB would be even more likely to go slow.

“If there is a banking sector crisis in Greece, the ECB can’t ignore it, but really it is about the spillovers,” BNP Paribas economist Ken Wattret said.

Portugal is touted as the next shoe to drop. The prospect of Spain, worth more than a tenth of the Eurozone’s GDP, catching the bug is both worrying and plausible.

“We all know that if Greece doesn’t solve their problems, the market will, and already is, focusing on the next weak link. That’s Portugal, Ireland’s next, and then Spain. And then you’ll get a domino effect,” Dutch Finance Minister Wouter Bos said.

A change in the ECB’s stance would be imminent then.

“If you were talking about Spain and hypothetically Italy, that would cause a change to the ECB’s plans,” Investec economist Philip Shaw said. He says expectations the ECB will ease liquidity before touching interest rates might also change.

North-south
Some analysts said fear of contagion could push southern European central bankers to club together to keep liquidity in place longer – a bloc of nearly half the 22 central bankers sitting on the ECB’s policymaking Governing Council.

“Generally the governors (from southern Europe) were of a more dovish disposition,” Wattret said. “But if you combine that with the problems their economies are facing, then clearly they will be at the dovish end of the spectrum when it comes to exit strategy for conventional policy.”

The ECB’s southern European representatives – who include three members of its Executive Board – have not so far presented themselves as a united group. Nor do their recent statements make it easy to pigeon hole the majority as policy “hawks” or “doves”.

While Governing Council members are expected to make decisions suiting the Eurozone as a whole and not their country’s needs, analysts suspect that concerns at home could weigh heavily.

“It should not be this way, but it probably will be,” Unicredit’s Valli said.

Classically, central banks would respond to loose fiscal policy by tightening monetary conditions but this is not on the table. Conversely, the fiscal responsibility and tightening of budgets urged by the ECB could also keep interest rates low.

“[Fiscal tightening] is beginning now, but it is going to last and that is going to act as a restraint on domestic demand and slow the recovery down,” BNP Paribas’ Wattret said.

“As a consequence of the spare capacity in the economy, inflation should stay low and the ECB will not be at the forefront of the interest rate tightening cycle.”