Paul Gauguin has long been regarded as a leading modernist. Here we look at why he wasn’t fully appreciated until after his death 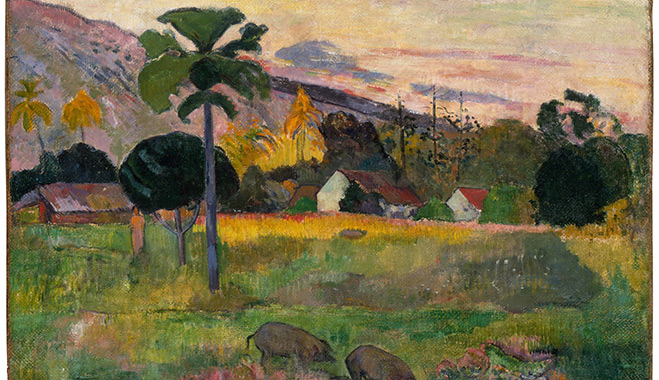 Paul Gauguin’s influence on the work of Picasso and Matisse is widely acknowledged, and his paintings hang in galleries around the world alongside Paul Cézanne and Vincent Van Gogh. Yet it wasn’t until after his death in 1903, when a new generation of artists took significant notice of his work, that Gauguin began to receive the recognition he deserved.

What excited visitors to the important posthumous retrospectives held in Paris in the years after his death was his representation of the ‘primitive’. He spent a decade living in French Polynesia in the South Pacific, which saw the artist’s work become suffused with tropical pastoral imagery and symbols of Tahitian folklore. The philosophy behind primitivism has been much criticised by postcolonial theorists, but the movement’s impact on 20th Century art cannot be underestimated.

Two shows in Europe explore Gauguin’s contribution to this field of work. Paul Gauguin – The Prints, which opened at the Kunsthaus Zurich in September, focused on his print-making; a branch of the artist’s practice inextricably tied to his exploration of foreign cultures, while Gauguin and the Voyage to the Exotic locates the artist in the wider context of primitivism, and considers the influence of this period on his work in later art movements.

In search of inspiration
In 1891, following short periods spent in Brittany, Panama and Martinique, the artist travelled to Tahiti for the first time. Estranged from his family and suffering from intermittent bouts of depression, he was seeking a refuge from modern life and found it in the apparently idyllic lifestyle of French Polynesia. Gauguin came back to France after two years but in 1895 returned to the South Seas, living there – first in Tahiti then in the Marqueses Islands – until his death in 1903.

Paul Gauguin – The Prints comprised three sets of prints: the first, known as the Volpini Suite from the exhibition at the Monsieur Volpini’s Café des Arts in 1889 where it was displayed, draws on the artist’s trips to Brittany and the Caribbean. Produced using conventional lithographic printing methods, the prints reference Gauguin’s post-impressionist paintings and other works from this period.

The later two sets of prints, woodcuts made during and after Gauguin’s ‘discovery’ of Tahiti, show a very different sensibility at play. Tobia Bezzola, curator of the Zurich show, sees the final decade of Gauguin’s life as an attempt “to go back to the wild” and believes that the woodcuts are best understood in this context, allowing the artist to experiment not only with subject – as he was doing so successfully in his paintings – but also with technique.

Bezzola explains, “He experimented with printing techniques, with colours. With the woodcuts he really discovered a way where he could work, act and be more like somebody who had not been tainted and jeopardised by civilisation too much. It allowed him to be wild again, to go to a level of non-cultured-ness, of a self-taught experimental approach to art.”

Pioneering culture
Paloma Alarcó, curator of the wider-ranging Madrid show of the artist’s work, regards Gauguin as “a kind of pioneer” in the development of primitivism. Gauguin and the Voyage to the Exotic featured 110 pieces by Gauguin – mainly paintings, but some graphic works too, including a selection of paintings by German expressionists and French fauves influenced by Gauguin. These artists, Alarcó says, responded to the “simple forms” and “bright colours” in the painter’s later work. They were also inspired by his portrayal of man’s relationship with nature. Alarcó draws attention to the mystic content of Gauguin’s work, an aspect we get a strong sense of when reading Noa Noa, the memoir he wrote of his first period in Tahiti.

Gauguin’s intention was for this short, rhapsodic account of his travels to be published as an accompaniment to the series of 10 woodcuts he made following his return from his first trip to the South Seas. That never happened, and the critical response to the artist’s self-published version of the memoir was mixed, but this should not taint the spirit of what this artistic innovator was trying to achieve, and poetically states: “All the joys – animal and human – of a free life are mine. I have escaped everything that is artificial, conventional, customary. I am entering into the truth, into nature.”