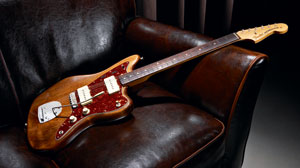 In 1946, Clarence Leonidas ‘Leo’ Fender, a builder of amps and PA systems, founded a musical instrument shop with the intention of building instruments that could be heard over the big bands of the time. Over the next ten years or so, the Fender Electric Instrument company would create guitars that would become not only objects of desire but icons of design for generations to come. Over 60 years on from that golden age, the manufacture of electric guitars is now a lucrative industry. Now luxury items, customers pay for the privilege of owning instruments that look, feel and play exactly like the guitars of old or those owned by their heroes.

Fender Custom Shop Artist Series
Eric Clapton Stratocaster
$3,800
The signature model of one of the greatest blues guitarists of all time, this model is based on Clapton’s legendary Stratocaster ‘Blackie’. Hand-built in the same workshop where the man himself gets his guitars, it features Clapton’s exact specifications including custom noiseless pickups and special tone boosting electronics. With the original ‘Blackie’ auctioned for over $900,000 in 2004, this is the closest to old slow hands’ guitar you’re ever likely to get.

Fender American Vintage ‘57 Stratocaster
$2,199
The Fender Stratocaster is arguably the most famous and imitated guitar of all time. Invented in 1954, its three pickups and tremolo vibrato design quickly attracted interest from players such as Buddy Holly and Dick Dale. Arguably though, it would be players such as Eric Clapton and Jimi Hendrix (who played a right-handed model upside down as no left-handed versions were available at the time) that would give the guitar its enduring appeal as an icon of rock n’ roll. This ’57 model replicates those early golden years of the Strat, with a Seafoam Green finish and authentic chrome ‘ash tray’ bridge cover, so named for what most guitarists of the time ended up using it for.

Fender Elvis Costello Jazzmaster
$1,500 limited availability
The Jazzmaster was designed to compete with popular jazz archtop guitars of the 1950s. Instead, the Jazzmaster found its way into the hands of surf guitar bands and alternative stars such as Elvis Costello who arguably gave the instrument its lasting appeal. Finished in Walnut.

Fender American Vintage Series
70s Stratocaster Reissue
$2,099
Designed as a hybrid of all the best aspects of design at the time, these 1970s-inspired guitars come in a choice of ash or alder wood bodies and feature U-shaped necks and vintage-style pickups.

Fender 2011 Closet Classic Precision Bass Pro
$4,200
Fender was responsible for the design of the first mass-produced electric bass guitar in 1951. The Precision Bass — or P-Bass — has remained an industry standard to this day. This special edition   updates the traditional style, adding an extra Jazz Bass pickup and a Badass bridge.