Jo Caird on the legacy of Raphael’s masterpiece, which is being celebrated in Germany, and highlights some exhibitions of note around Europe this season 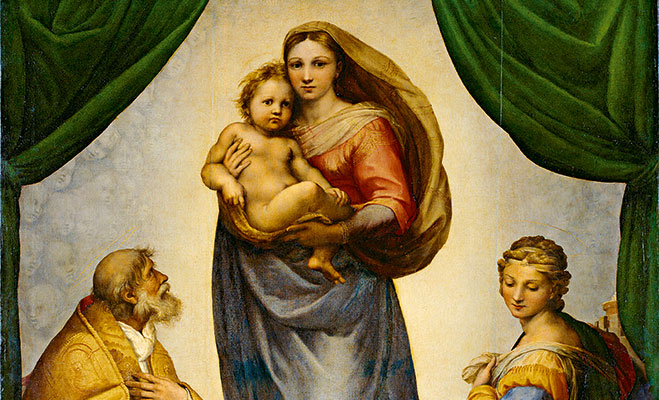 It’s not often that a major exhibition is dedicated to just one painting, but then it’s not every day that a work of the artistic calibre, historical interest and contemporary relevance of Raphael’s Sistine Madonna celebrates a 500th birthday. One of only a handful of Raphaels found outside Italy, the extraordinary altarpiece is a high point of the wonderful Old Masters collection at the Staatliche Kunstammlungen Dresden (SKD).

Andreas Henning, curator of Italian paintings, has observed the effect the work has on visitors – both art history experts and those who’ve come seeking a glimpse of the most famous angel babies in the world – and is thrilled to be able to give the painting the attention it deserves with The Sistine Madonna: Raphael’s iconic painting turns 500.

While everyone was aware of Raphael’s masterworks such as the Vatican ‘Stanze’ in Rome, the Sistine Madonna had languished out of the public eye in Piacenza for more than 200 years

In early 1754, an almost unknown altarpiece was removed from the Church of San Sisto in the small northern Italian city of Piacenza, carried over the Alps and presented at the court of August III, Elector of Saxony and King of Poland. Such a journey would normally be postponed until the arrival of spring, but negotiations for the purchase of the Sistine Madonna had been so fraught with difficulty that when the sale finally went through, even the driving rain and bitter cold of the Alps in winter couldn’t stop August III’s agent from dispatching his precious cargo.

Buying a piece of history
August III was so desperate to add the painting to his collection in Dresden, Henning explains, because at the time Raphael was “by far the most important painter”. The King bought hundreds of works every year, but “what was missing was a painting by Raphael, the unique painting by Raphael.” Used to paying somewhere in the region of 800-1,000 scudi Romani (the currency of the Papal States) for large works, August III handed over 25,000 scudi Romani for the Sistine Madonna, an enormous amount of money for a painting during that period.

By the beginning of the 19th century, says Henning, the work was “the most famous painting by Raphael in Europe”, but when the Sistine Madonna was first exhibited in Dresden in 1754, another Italian artist, Antonio di Correggio, was the flavour of the day in Germany. While everyone was aware of Raphael’s masterworks such as the Vatican ‘Stanze’ in Rome, the Sistine Madonna had languished out of the public eye in Piacenza for more than 200 years. Unlike Rome, Milan and Venice, Piacenza was not a Grand Tour destination, so no one except the Benedictine monks of San Sisto, for whom the work was commissioned in 1512, ever saw the painting. It was also barely written about: Giorgio Vasari, the great chronicler of the lives of Italian artists in the 16th century, wrote only one line about the painting, calling it “a truly rare and extraordinary work”.

The SKD exhibition explores the painting’s beginnings – with various other paintings and drawings by Raphael displayed to give a sense of the uniqueness of the Sistine Madonna – but it also considers the work’s rise to fame after its transfer to Dresden. As increasing numbers of visitors were struck by the altarpiece, essays and poetry were written about it and reproductions were produced. Henning puts the painting’s popularity down to Raphael’s “very simple but very powerful composition” and the “heavenly vision” he produced for the figure of the Madonna.

The pair of winged cherubs at the base of the Sistine Madonna are an interesting story in themselves. Appearing first in paintings before being reproduced as prints and on porcelain, they had a life of their own from as early as the end of the 18th century. Now, of course, their little faces can be found on kitsch stationary and homeware the world over. “A lot of our visitors”, says Henning, “are surprised to see they’re small and only two of the angels in the painting”.

The Sistine Madonna: Raphael’s iconic painting turns 500 contains over 250 works of art and historical artefacts. Henning was very keen that the show have an international feel, so there are numerous examples of the work’s reception in different cultures and markets, from England to Russia. Given the painting’s significance worldwide today, it is extraordinary to consider the absolute obscurity of those early years as a humble altarpiece in Piacenza. Happy birthday Sistine Madonna.

The Sistine Madonna: Raphael’s iconic painting turns 500 is running at the Staatliche Kunstammlungen in Dresden, Germany until August 26.
www.skd.museum