As a child, Anne-Marie Imafidon was labelled a prodigy for her outstanding academic achievements. Through her company Stemettes, she is paving the way for more girls to follow in her footsteps 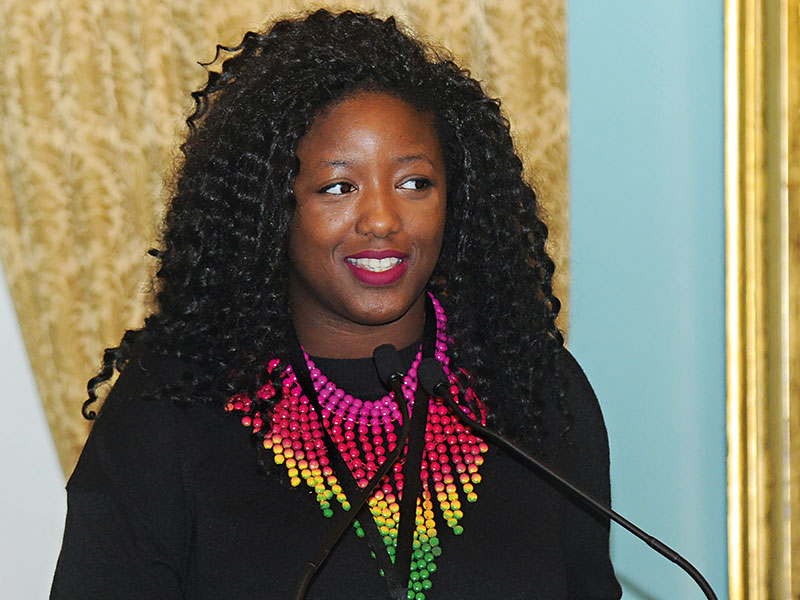 If there’s one thing Anne-Marie Imafidon takes exception to, it’s unnecessary hero worship. She believes, for example, that changes are needed to the education system, shifting it away from a model “that creates demigods out of people [who] have tenure”. She is equally dubious about the technology sector, telling the Evening Standard in an interview in March: “It’s not this big scary thing you have to be a genius to come into. Portrayals [of the industry] give you Einstein – these are human beings, normal people.”

And yet, Imafidon is often written about with the very same reverence she shuns. She has been referred to as a child prodigy, a genius and a serial record breaker. “It is what it is,” she told European CEO. “It happens, I can’t run away from it.” In fairness, it is difficult to know how else to write about the 29-year-old, who Black America Web called “the pioneering child among the young genii” as a result of her outstanding academic achievements. She hails from an extraordinary family – many of the Imafidon siblings had broken world records before even entering their teenage years. Peter and Paul, Imafidon’s twin brothers, were the youngest children in British history to attend high school, at just nine years old, and her sister Samantha passed two high-school-level maths and statistics exams at age six.

While some women working within financial institutions have faced severe pay disparity and a ‘boys’ club’ culture, that was not Anne-Marie Imafidon’s experience

Imafidon, meanwhile, became the youngest girl ever to pass her computing A-level at age 11, and two years later received a rare scholarship to study maths at Johns Hopkins University. Between the ages of 15 and 20, she completed bachelor’s and master’s degrees at the University of Oxford, becoming the youngest ever graduate with the latter qualification in June 2010.

“Oxford was brilliant – I had a really good time,” she said, adding that she’d “do the whole thing over again”, although she won’t be seeking a PhD qualification any time soon – she does hold honorary doctorates from three British universities. “I did think about it [when I graduated], but at that point, I wanted to finish studying, go off and earn a little bit of money so I could live and not be a poor student,” she said.

It’s just one of the instances in her interview with European CEO where Imafidon’s refreshing honesty dispels the sense of awe her academic accolades inspire. She’d “never say never” to the possibility of returning as a professor, but added: “For me, there’s quite a lot of other options that look better, so it’s not top of my list at the moment.”

Pioneering work
Imafidon has been pursuing one of those other opportunities since 2013 when, aged 23, she founded Stemettes, a social enterprise that supports women and girls looking to launch careers in the science, technology, engineering and maths (STEM) industries. Since the company’s foundation, nearly 40,000 women have attended Stemettes workshops, panel discussions and hackathons across the UK and Ireland. The project has partnerships with the likes of Deutsche Bank, Bank of America Merrill Lynch and KPMG.

Stemettes was in part inspired by Imafidon’s university experience – she was one of just three girls in a class of 70 reading maths and computer science – and partly by her early career, during which she worked for Deutsche Bank, Goldman Sachs and HP. Her first graduate role was in a technology team at Deutsche, an experience she described as “incredibly corporate” but “really positive”.

She credits her direct managers with creating a more relaxed atmosphere than one would traditionally associate with such a prestigious bank, saying: “We were quite fortunate in our team to be allowed to enjoy ourselves at work; to be allowed to get creative and explore external ideas.” While some women working within financial institutions have faced severe pay disparity and a ‘boys’ club’ culture, that was not Imafidon’s experience. Rather, she said: “I was listened to, was promoted, was taken seriously by a lot of people, and that’s definitely why I set up Stemettes, to encourage other people to come and join in and have other experiences like I had.”

Nevertheless, she recognises that those issues do exist within the sector, and sees Stemettes as a solution. “[The company has always] been more about social mobility than the gender pay gap because that wasn’t the drive initially,” she said. “It had a focus on increasing the number of women choosing to pursue a career in STEM. I don’t think our goals have changed [since 2013], but the wider narrative has evolved, and it’s helped to reinforce the need for our work.”

Closing the gap
One example of that overall cultural shift is gender pay gap reporting, which became compulsory in the UK in April 2017 following changes to the Equality Act. Companies with more than 250 employees must now declare their pay figures annually or risk court action. “Gender pay gap reporting is something that’s fairly new, but anyone [who] talks about it says the quickest way to close the gender pay gap is to get more girls into STEM, and yet that’s what we’ve been doing for the last six years before reporting was even made compulsory,” Imafidon said. “We got there before it was cool.”

Stemettes’ pioneering work means it is often discussed in the context of the future of work – a subject that Imafidon has also spoken on extensively in a personal capacity. For her, the company’s purpose is to make girls “aware not only of the kind of roles and opportunities available in [the STEM] space, but also the technology that’s driving it”. Alongside her role at Stemettes, she is a trustee of the Institute of the Future of Work, a non-profit organisation that promotes research into the challenges that a changing workplace environment will bring, and makes policy recommendations for both businesses and government.

There’s no checklist of criteria for working in STEM, but rather plenty of space for different voices

At a workshop run by Stemettes, in partnership with the Institute of the Future of Work, Imafidon said: “We put the girls’ voices at the centre of the discussion, [to find out] what their expectations are from work in the future.” She told European CEO: “Ultimately, whether it’s automation, whether it’s [artificial intelligence], whether it’s machine learning, it’s still STEM opportunities – as the industry has evolved, the people… we have as role models and the roles that we can talk to the girls about have evolved in parallel.”

Amplifying role models in the STEM space is something Imafidon also does through her podcast, Women Tech Charge, which she launched at the beginning of March in partnership with the Evening Standard. So far, she has spoken with: Priya Lakhani, the founder of Century Tech; a woman known as B, who works at GCHQ; and Manon Lagrève, a software project manager turned Great British Bake Off contestant, among others. The diverse cast of interviewees is designed to highlight that there’s no checklist of criteria for working in STEM, but rather plenty of space for different voices.

“I didn’t really know many people [who] worked in technology – I only knew it was a job when I hit 16 and was doing an internship within a technology department at Deutsche Bank,” Imafidon said. “I ended up in the industry without needing Stemettes, but there are plenty of girls for whom that adage of ‘you can’t be what you can’t see’ rings true, so it’s about being able to give them the right kind of role models and the right kind of science capital to know that this is a choice that they can make.”

Moving with the times
When she’s not at Stemettes’ swish offices in London, Imafidon can be found travelling the UK, attending Stemettes events or delivering keynote addresses for conferences. “I’m probably in two cities a week, either in the UK or internationally,” she told European CEO. “I’m at an event every other week, but I also do a lot of speaking and attend meetings. So it’s all go – no two weeks are the same.”

In a world dominated by the internet (and more specifically, by social media), she believes in the value of physical presence. “[At Stemettes,] we’re all about hot interactions, which means actually meeting people, so we have that as our primary outlet,” she said. It’s an exciting lifestyle, but its changeable nature, together with Imafidon’s personal emotional investment in Stemettes’ success, can make it difficult to switch off. “I really love my job, so I’ll often be like, no, I’m going to sit here and finish this article,” she added. In the downtime she does have, Imafidon likes to cook and watch television. “I love anything that’s funny,” she said.

Looking ahead, Imafidon is focused primarily on achieving a greater gender balance in STEM industries, and the majority of her pursuits – from her work at Stemettes to her podcast, public speaking and consultancy engagements – funnel into that goal. Women currently make up 21 percent of the STEM workforce, a figure that Stemettes would like to boost to 30 percent. “It would be nice if it was closer to 40 percent in 10 years,” Imafidon said.

She’d also like to relinquish some of her operational responsibilities in favour of returning to a more technical position. “I’d love for it to be something where we have an entire generation that knows women do technical things,” she told European CEO, highlighting a desire for Stemettes to eventually become obsolete as gender parity in STEM is achieved.

As a social enterprise, the firm exists to serve a purpose, but once the representational gap is closed, it will have to evolve its offering or close its doors altogether. At that point, Imafidon will turn her hand to a new set of challenges, with exactly the same sense of ambition and pragmatism she has demonstrated in her leadership of Stemettes. Next time, though, she can count on an army of empowered young women to follow her pioneering path.