Switzerland's richest man remains a reclusive figure – except when he applies his Harvard Business school-trained brain to sailing, that is 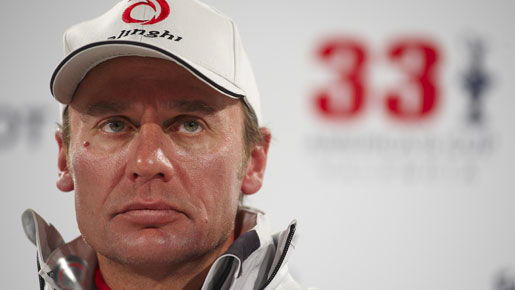 Forty-four-year old Ernesto Bertarelli is no ordinary middle-aged Swiss citizen. His personal wealth is estimated at more than $8bn; he is an accomplished navigator and sailor and he’s the holder of a Légion d’honneur award given to him by ex-French president Chirac. Oh, and he’s also married to a former 1988 Miss UK and has a house on the shores of Lake Geneva. Not bad going for 44. Does he have a premier cru lifestyle to match? If he does, then he keeps it to himself.

His biggest passion is sailing – of which more of in a bit – and is the only ostensible clue to his vast fortune, given the vast quantities of cash he throws at this hobby. In industry he’s best known as the former head of Swiss pharma giant Serono which is where the family history comes in, big time.

Serono was originally started in 1906 by Ernesto’s grandfather Cesare. One of the company’s first endeavours was extracting proteins from egg yolks in order to produce anaemia treatments. The company went on to take a pioneering role in infertility treatments in the 1960s, allegedly based on hormones taken from urine gleaned from postmenopausal nuns.

In the mid 1970s Fabio Bertarelli, son of Cesare and the subsequent CEO, bought out a controlling stake of the company from the Vatican. Fabio also had to move the company: in 1977 the family decided to get out of Italy for fear that leftwing Red Brigades militants might threaten – even kidnap – the family. The threat of physical violence in many cases was real. So Serono moved to Geneva where Ernesto later discovered his love of sailing. Ernesto himself took over the company from his father in 1996, just two years before his father died.

Ernesto’s personal life is apparently full and happy. He met former 1988 Miss UK, Kirsty Roper, when on holiday in Italy in 1997. They married in 2000 and have several children; Roper is a sailor herself as well as a musician, writing the number one Black Coffee  for All Saints. So it’s a full life, not short on accomplishment for both.

Crown prince
Some years ago a Wall Street Journal Europe article described Bertarelli as the “crown prince of a Swiss industrial dynasty”. It’s not far from the truth, in fact. But Bertarelli was never molly-coddled, you get the impression, or allowed to coast because of his hugely wealthy family background. He often accompanied his father from the age of 10 on business trips. He was even helping craft the company’s annual budgets by the age of 17.

But the pharmaceutical industry hasn’t sustained this quiet, private man with a passion for the sea and sailing. Serono was sold to German giant Merck in early 2007 for $13.3bn, becoming Merck-Serono. It was an expensive move for Merck at the time paying a 20 percent premium on Serono’s share price as well as selling €2.5bn of new shares in order to finance the move.

Merck’s own drug unit at the time was too small to compete. The deal with Serono would, it was estimated, add around €2bn to annual pharma sales. And Ernesto and sister Dona each walked away with an estimated $4.5bn. “Together, Serono-Merck will be a world-class biotechnology company and a major player in the global pharmaceutical market,” Ernesto said at the time. “This match will allow Serono’s innovative biotech abilities to play an important role in the future of the combined company while expanding its global reach.”

He was able to exit Serono with his head held high, not simply as another family heir: he personally had rejuvenated the company by switching the focus from pharma to biotech and revenues soared as a consequence: from around $800m in the late nineties to almost $3bn by 2006.
Deploying his power
Fast forward to 2010: Bertarelli now leads Kedge Capital Group and Ares Life Sciences. Kedge is an investment management group while Ares is a private equity operator with around €500m under management investing in life science companies. And it is here where Ernesto’s own forensic knowledge of the bioscience market comes is deployed: Ares typically gets stuck into companies that are late stage or advanced development i.e. where their product has been tested but in need of cash to get out the door.

“Companies that have exceptional value potential and a compelling business model,” says Ares’ in its own words.

“Europe is the primarily geographic focus for our investment. We will also invest in select emerging markets.” You can bet they do, especially Asia. Their first acquisition was in Hungary-based medical diagnostics and dialysis group Euromedic for €800m, itself sold onto Ares by private equity company Warburg Pincus. But again, the acquisition will be leveraging Bertarelli’s expertise.

His Kedge Capital Group, on the other hand, is not mis-named. To “kedge” is to steer a path through tricky waters (plainly Bertarelli finds it difficult to give up associations with the sea). But it too is an interesting platform. The idea of Kedge Capital Group is to create an investment platform that is more or less familiy-based. Mostly it invests in private equity, hedge funds and real estate. The idea is aligning a number of different interests and asset classes but with no third-party intermediaries. It’s also structured so that it rewards long-term peformance. There’s very little information about its assets but its thought Bertarelli has constructed it mainly through offices in London, Jersey and Geneva.

The billionaire battle of the seas
But Bertarelli’s passion for the sea is a stand-out, and he’s not afraid to use his cash in competing in the America’s Cup – amongst other events. In 2007 yachting fans accused him – by then he was the owner of the Swiss team – of buying up members of the New Zealand team. His Swiss team snatched the prestigious America’s Cup – the Formula One of the seas – twice in a row beating New Zealand by just one second.

However it was Oracle billionaire Larry Ellison and his three-hulled boat USA, bristling with technology and using a vertical wing instead of the usual, conventional mainsail, that outwitted Bertarelli’s own Alinghi vessel in the America’s Cup this year. It was also a battle of huge personal power and vanity for both men. Both tycoons could chuck as much cash at their respective vessels as they wished. But such a personal battle had a cost: it effectively reduced the number of people able to compete on a similar playing field.

In fact, the technology being deployed by the two competing sportsmen was so advanced that the America’s Cup’s own rules were brought into question as both billionaires attempted to leverage as much wind as they could get from their massive, over-sized rigs. In the end it was also a race for billionaires, not rather poorer millionaires. Currently rumours are rife that Bertarelli has his eyes on another sport – football. Could he buy Fiorentina? A major stake from current owner Diego Della Valle could be up for grabs, but ACF Fiorentina deny it so far.

Bertarelli though should stick to the sea. Sailing is in this biotech billionaire’s blood. He also needs time to get revenge on Larry Ellison. One suspects it is sailing where Bertarelli still has to prove himself, despite a life not short on achievement. He simply has to win. Period.