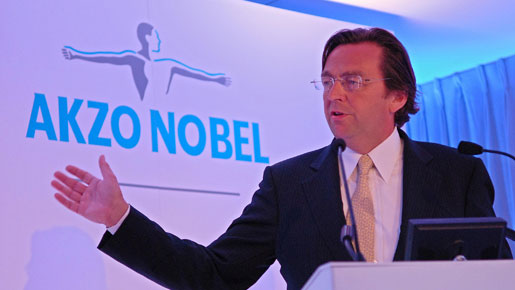 Wijers is hardly your average businessman. The first six years of his professional life were spent in academia, working as an Assistant Professor of Economics at Erasmus University in Rotterdam. During this time he was also studying for his doctorate in economics, which culminated in a thesis titled, ìIndustrial politics: The design of government policy for industrial sectorsî. This research was not his only brush with politics ñ while it is by no means unheard of for someone who has made a name in business to go into politics, it is more unusual for someone to take a top job in politics and go the other way. Yet this is exactly what Wijers did. After a stint as a civil servant and then a management consultant, in 1994 he took the role of Minister of Economic Affairs in the Dutch government, where he remained for a full four-year political term. While in this position he was responsible for a change in the law that allowed the extension of shop opening hours, and coined the Competition Regulation law.

Once his term in office was over, in 1998 Wijers took on the role of Senior Vice President for Boston Consulting Group in Amsterdam, where he had previously worked as a management consultant in the mid 80s and early 90s.

The company itself has a long and illustrious history that starts in the mid-17th Century with Swedish weapons manufacturer Bofors. In 1984, it merged with KemaNord, a chemical company that was originally founded in 1863 by Alfred Nobel, and together became Nobel Industries. A reminder of its historic links with one of the world’s most famous chemists remains in the latter half of the firmís name today. The acquisition by Nobel Industries of another three companies in the mid 80s, EKA, Sadolin & Holmblad and Berol Kemi, cemented the foundations for its current position in the paint, chemicals and coatings industries. Finally, in 1994, Nobel Industries merged with Dutch pharmaceuticals and chemicals enterprise AKZO to form AkzoNobel. More recently, in 2008 Wijers oversaw the acquisition of the British firm Imperial Chemical Industries (ICI), a major player in its own right on the world stage, and Dow Chemical companyís powder coatings activities.

When talking about his management style to Times of India, he said that he loves to ask questions: “It helps me build a logic – I prefer to ask how someone is doing and what he is doing, rather than telling people what to do.” He expands upon this in an interview with CNN, saying: “My philosophy, the people I work with, know much better about the business than I do. If you get to the right question, the answer basically automatically pops up and basically by asking a lot of questions, discover logic.” It’s a style that one can imagine coming naturally to a former lecturer and researcher, encouraging people to develop their own logic pathways and developing his own in the process.

Regarding his recruitment process, he adds: “I’ve worked in very different environments and I’ve always tried to look for people who are just as curious as I am, so people not necessarily knowing all the answers but that are interested in the area in which we work, that are eager to find new things out, that are committed to change. They’re committed, they have a passion for quality that’s what I usually try to find.”

However the company has not been without its troubles. In February 2009, AkzoNobel posted an annual loss of 1.1bn euro – its first loss in eight years ñ followed by a further quarterly loss of 9.2m euro in the April. Speaking to Forbes Magazine at the time, he said that the decorative division had taken the brunt of the hit due to a slow down in the global construction market and a price hike in raw materials. To combat the effects of this, Wijers froze salaries for a year while undertaking an aggressive restructuring programme – the key to his recovery plan for the firm. This meant for the most part selling off assets that are not part of its core business, such as National Starch, which was sold in June to American Corn Products for 1bn euro. It is a strategy that has produced significant results, with a 13 percent increase in turnover in quarter two of 2010 to 13.9bn euro and net profits up 76 percent to 273m euro.

Wijers has ambitious plans for the future. With growing industrial markets and a strengthening construction sector in Asia, the forcasted turnover in the Chinese market alone is 3bn euro in 2015. The consolidation of the business into a dedicated paint and coatings manufacturer continues, with non-core assets being divested to focus on its central business. Despite the difficulties produced by the recession, the company is once again growing and is outperforming expectations and with a man of Hans Wijersí calibre and experience at the helm it is little wonder that AzkoNobel has recovered so well, nor is it unlikely that these ambitious plans will come to fruition.