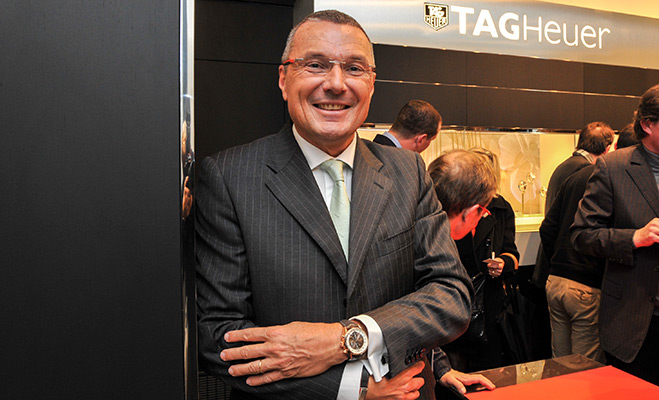 Despite having started his business career in mass consumer goods and consulting, Jean-Christophe Babin has an eye for luxury. Born into a family of lawyers, he was exposed to quality timepieces at an early age through his father’s collection of 17th and 18th-century grandfather clocks. By the time he had taken over as President and CEO of TAG Heuer, Babin had already owned over 20 luxury watches, including the company’s Carrera model.

Becoming the watchmaker
After finishing school, Babin enrolled in the French military, where he had the opportunity to travel the world as aide de camp to a naval officer. Having decided to forgo a career in the armed forces, he backpacked through India before working in marketing and sales at Procter & Gamble. Eventually, Babin moved to the Boston Consulting Group, gaining exposure to a variety of brands and industries before working at Henkel, where he was made senior vice president in 1998.

During his time at Henkel, his wife was working at LVMH as marketing director for Italy with the couple attending most of the events she had organised. At these luxury brand events, Babin rubbed elbows with actors, writers, poets and singers. So when LVMH acquired TAG Heuer and offered him the job of leading the company, he described his decision as a “no-brainer”.

Fractions of a second
TAG Heuer has long had a special relationship with motor racing, having manufactured the famous ‘Time of Trip’ in 1911, the first ever stopwatch designed specifically for racing and sports cars. Over the years, the brand has been associated with prestigious racing events including Le Mans 24, Formula 1 and the Indy 500. It is this relationship Babin and honorary Chairman Jack Heuer believe has driven the company to craft highly reliable and precise watches.

When Babin arrived at the company in 2000, he was surprised that its focus on precision had faltered and set out to renew the commitment to that which had set it apart from competitors.

Babin said: “Six months after I joined, we decided to launch an all-out programme and when I say all-out, I mean without any sacred cows from quartz to digital to mechanical, whatever it would be, to bring TAG Heuer back into movements, but especially movements which would get the company back to its roots, which is mastering the tiniest fractions of time.”

He would soon leave his mark on the company as it went on to release revolutionary and precise timepieces. The new products included the Calibre 360, the first mechanical chronograph wristwatch with 0.01 of a second precision. It was a fitting tribute to Charles-Auguste Heuer – son of the company’s founder – who in 1916 had given the world the first mechanical stopwatch that measured hundredths of a second.

TAG Heuer convinced some of the world’s biggest stars to become ambassadors for it as part of ‘The Knights of Modern Time’ campaign. Motorsport was of course covered with Lewis Hamilton and Jenson Button in the mix, but TAG Heuer’s glitzy cast also included actor Leonardo DiCaprio and tennis champion Maria Sharapova.

The products may be high-end, but they are certainly not meant to be stuffy. Babin’s style as CEO seems to be similar. He readily admits some of the perks of his job:  “I can easily take the day off, or leave the office at 2pm, get back home and work from there. Managing time is quite easy when you are in a position like mine.”

Watching the economy
With the global economic slowdown, the company faced challenges pertinent to all luxury brands. Babin said: “In the past few years, the market for luxury watches has declined by about 25 percentage points. The only other period of recession that I have seen that compares to this one was in the seventies – and even during the worst of the seventies, the market never dropped by that much.”

Still, TAG Heuer believes it has several advantages for weathering the storm currently affecting haute horlogerie. Babin argues that part of its core strategy revolves around offering a variety of products in a range of prices between 1,000 and 8,000 Swiss francs.

He said: “Maintaining a broad range of collection has been critical to our success, not only for the sake of having different styles but also for offering different price points.”

The recession also means that customers are likely to be increasingly attendant to a product’s advantages over that of others and TAG Heuer believes it’s commitment to quality can benefit from this factor. According to Babin, the company “gained market share because a lot of retailers and consumers realise that the value we offer for their money is greater than before. When consumers who usually spend 12,000 francs on a watch find themselves in the 9,000 franc price range instead, they will be looking for brands that offer something that no other could”.

With Babin at the helm, the company has also expanded its focus into associated products such as high-end men’s eyewear and luxury communication. TAG Heuer’s Meridiist line of mobile phones incorporates features not found in other brands, such as a digital clock controlled by a power switch and illuminated by an organic light-emitting diode system, dual display screens and a corrosion-resistant shell made from materials typically used in watches. Keeping with its motor sports tradition, the company has also partnered with Tesla Motors in 2010 to produce the Tag Heuer-Tesla Roadster, a zero-emissions electric sports car.

Babin said: “Why just stick to watches, even though our development potential is still huge, when a certain type of high-end sophisticated and modern consumer sees TAG Heuer as much more than a mere watch brand, but considers it an aspiration brand combining technology and design with boldness, discernment, style and quality.” Jack Heuer seems to share the sentiment, having once remarked, “Time never stops. Why should we?”