Inditex, the company behind household brands Zara and Bershka, is one of the largest fashion retailers in the world. Its CEO, Pablo Isla, is a key reason the company has flourished in difficult market conditions 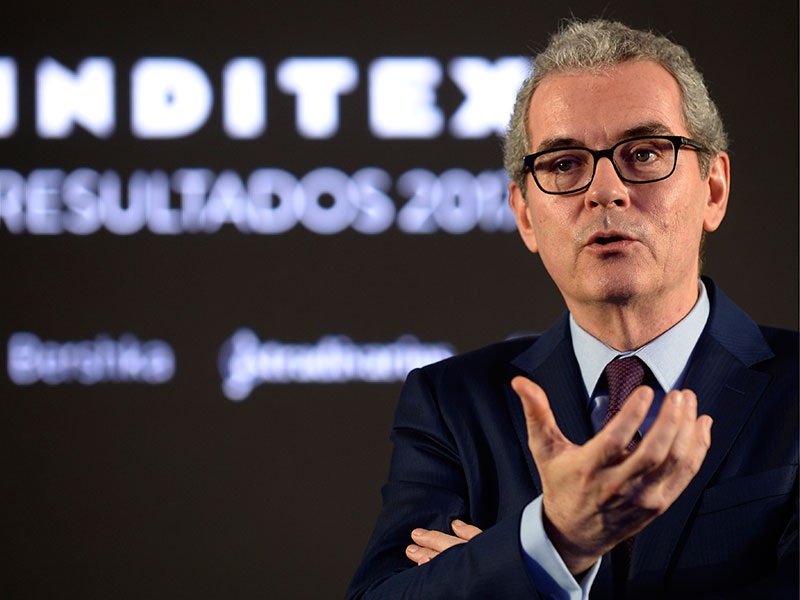 Under Isla’s watch, Inditex has flourished in difficult circumstances, overcoming the monumental issues presented by the global financial crash with aplomb
Profiles

The name Inditex might not be particularly well known, but its products certainly are. The Spanish multinational is one of the largest fashion groups in the world by market capitalisation, comprising more than 7,400 stores in 96 different markets. Its brands include Zara, Bershka and Massimo Dutti, among several others.

Despite operating in a hugely competitive environment, Inditex is going from strength to strength. Last year, sales, earnings and revenue were all up, and the company is managing to expand into new markets while remaining true to its sustainable ethos. Much of the credit for pulling off this difficult balancing act should go to its CEO, Pablo Isla, who joined the firm in 2005.

Under Isla’s watch, Inditex has flourished in difficult circumstances, overcoming the monumental issues presented by the global financial crash and eurozone debt crisis with aplomb. The company has also successfully kept up with an evolving retail market, which has seen high street stores face huge disruption from online competitors.

While other brick-and-mortar clothes stores have been forced to close, Inditex’s brands have stood strong. As CEO, Isla has shown that he is able to react quickly to developments in the market, adapting to new technologies and shifting consumer tastes. It is hardly surprising, then, that Harvard Business Review has named him as the world’s best performing CEO for the past two years.

Big shoes to fill
When Isla joined Inditex in 2005, he already had a formidable business reputation. His previous roles included being co-executive chairman at Altadis and two spells at Banco Popular, one of the largest financial institutions in Spain at the time. Still, his decision to join Inditex is unlikely to have been an easy one: the fashion retail sector is hugely competitive, and closing down sales are a common sight on many high streets.

Inditex has bucked the trend, however: in 2017, revenue increased by nine percent to reach €25.3bn and net profit grew to €3.3bn. While Isla deserves a huge deal of credit for these numbers, he has also benefitted from the work previously done by company founder Amancio Ortega.

Ortega started his business empire with just one store back in 1963 – a modest clothing workshop called Confecciones Goa. Within 10 years, he was employing 500 members of staff and, by 1975, had launched the first Zara store. As the fashion world changed, Ortega was adamant that his company would change with it. In 1984, he invested in a state-of-the-art logistics centre and later established a pioneering distribution system.

From humble beginnings, Ortega managed to build a global empire and become Spain’s richest man. In 2005, he personally chose Isla to become CEO and, six years later, selected him to be his successor as company chairman.The decision to hand the reins over to Isla speaks to how highly rated he is at the company, as well as in the corporate world more generally.

Although Inditex is now a huge and growing multinational company, Isla has been careful not to break ties with the past. The company headquarters are still in the same small town – A Coruña, in the north of Spain – where Ortega launched the very first Zara store. People first
One of the ways in which Isla has stood out as CEO is his management style. Isla may have 30 years of business experience, including high-level positions at some of Spain’s biggest companies, but that isn’t immediately obvious to anyone who has seen him stroll around Inditex’s head office. Isla encourages an inclusive company culture and, as CEO, strives to be personable, rather than constantly locked away in meeting rooms.

In an interview with Harvard Business Review, Isla explained that his management style has evolved over time to become less about numbers on a balance sheet and more about building relationships.

“In managing a company, you of course need to be rational,” Isla said. “I lead a company with more than 150,000 employees and millions of customers. But I’m gradually learning to be less rational and more emotional. Motivating people and generating a sense of spirit inside a company are essential parts of the CEO’s role. We need to appeal to our employees’ emotions to help create an environment where they can innovate.”

The Inditex CEO realises that employees are the lifeblood of every company. He also understands that no single member of staff is bigger than the brand. During major store openings, Isla is always keen for the company to be the focus, not himself – it’s why Isla has gained a reputation for being publicity-shy. Still, his success proves that it is possible to be both ambitious and humble in business.

Fast fashion
Inditex has outpaced its rivals by adopting a unique approach to its clothing lines. Normally, fashion retailers will decide which designs are set to make up a season’s range months in advance. The items are then manufactured in markets where labour is cheapest before being shipped to logistics centres and finally to individual stores. Inditex does things differently.

The company’s designers are constantly on the lookout for the next big hit, scouring social media and fashion magazines for inspiration. Once they’ve come up with something they think will chime with consumers, the designs are sent to manufacturers immediately, with the majority of items produced locally to speed up the process. While this means manufacturing costs are higher, it also means new pieces can be in shops in little over a fortnight.

For a generation of Millennials who have grown up in a world of online streaming, ride-hailing apps and next-day deliveries, having to wait months to be able to purchase an item of clothing seems incredibly old-fashioned. The decision to target this demographic with fast fashion seems to have paid off: Inditex’s revenues have increased 40 percent over the last three years.

Even with its higher costs, Inditex’s profits are the envy of many of its competitors. The company boasted an operating margin of 17 percent in 2017, more than H&M’s 10.3 percent and Uniqlo’s 7.1 percent. British online retailer ASOS, meanwhile, could only manage four percent. Inditex has been able to achieve such remarkable figures because it allows shoppers to buy the same shoes they saw their favourite celebrity wearing almost straight away, instead of in six months’ time. In an industry where trends change quickly, that’s a massive advantage.

Conscientious consumers
Customers may be demanding that brands react quicker than ever to new fashion trends, but that doesn’t mean they are ignorant of the damaging impact that the industry is having on the environment: the fashion industry is the second most polluting in the world after the oil sector. Many shoppers are well aware of this and demand higher ethical standards than ever from their favourite brands.

At Inditex, Isla has been a major champion of sustainability. The retail group works alongside the Better Cotton Initiative and supports agricultural projects in China and India to help with the development of organic farming. Customers can also drop off used clothing at 921 stores across 21 markets so they can be repaired, resold or recycled. By 2020, 2,000 Inditex stores will operate a garment collection scheme.

As well as caring deeply for the environment, many consumers are demanding that businesses are held accountable for how they treat workers across all parts of a company’s supply chain. This ethos is embodied in Inditex’s Right to Wear campaign, which prioritises traceability, transparency and sustainability.

“Right to Wear is how we do business at every stage – operating in a way that is right for our customers, right for workers, right for communities and right for the environment,” Isla is quoted as saying on the Inditex website.

Social programmes have constituted a major part of Isla’s time as CEO. During the past year, Inditex’s investments have directly benefitted 1.5 million people. The Spanish firm provided €48m for community initiatives and supported 409 non-profit organisations.

However, just as in business, throwing money at a social or humanitarian problem will not make it go away. This is why Inditex uses the LBG Framework to measure the impact of its community investment schemes, assessing metrics connected to health, education and social welfare to ensure the company’s financial contributions are always being used in the best possible way.

A global presence
In May 2017, Zara opened its first store in India, a 51,300sq ft retail space in South Mumbai. The Asian retail market is set to grow significantly in the coming years, representing fruitful ground for clothing firms. India’s luxury market alone is set to grow from $23.8bn (€20.9bn) to $30bn (€26.4bn) by the end of 2018 – something that Inditex is well placed to benefit from. In fact, one of Isla’s key concerns as CEO has been ensuring that Inditex expands into new markets.

“Having launched in Belarus in 2017, we are now present in 96 markets,” Isla wrote in the company’s most recent annual report. “Over the past six years we have updated and adapted some 80 percent of our floor space, further accommodating new technology.

“We have opened 2,994 new stores during this period, while refurbishing and/or expanding 2,148 stores, and absorbing 1,046 older and smaller units into these nearby expanded stores. As a result, we ended the year with 7,475 stores, 80 percent of which are compliant with our eco-efficiency store criteria, a programme scheduled for full deployment by 2020.”

As well as opening new stores, growth at Inditex has also been built on a forward-thinking approach to online sales. The firm’s online sales platform was live in 47 markets last year, and revenue generated online rose by 41 percent year on year. It now accounts for 10 percent of total earnings. Isla aims to offer worldwide online sales across all of Inditex’s brands by 2020.

Having been in charge at Inditex since 2005, Isla has seen more than his fair share of market developments. In the retail space, there have undoubtedly been periods of sustained growth, but there have also been unavoidable dips. During recessions, it is difficult to get people to buy luxury fashion, regardless of how good a company’s business model or marketing skills are.

Isla has been careful to ensure that Inditex does not put all its eggs in one basket. Currently, only 16.3 percent of revenue comes from the company’s home market of Spain, with 44.9 percent coming from the rest of Europe, 15.6 percent from the Americas and 23.2 percent stemming from other markets around the world. Even though Isla may be based in the same part of northern Spain where Amancio Ortega began his fashion retail business all those years ago, the CEO always looks to the future with the big picture in mind.