With a mission to make Europe more amenable to aspiring entrepreneurs, Alice Zagury, CEO of The Family, offers start-ups a support system that extends far beyond funding 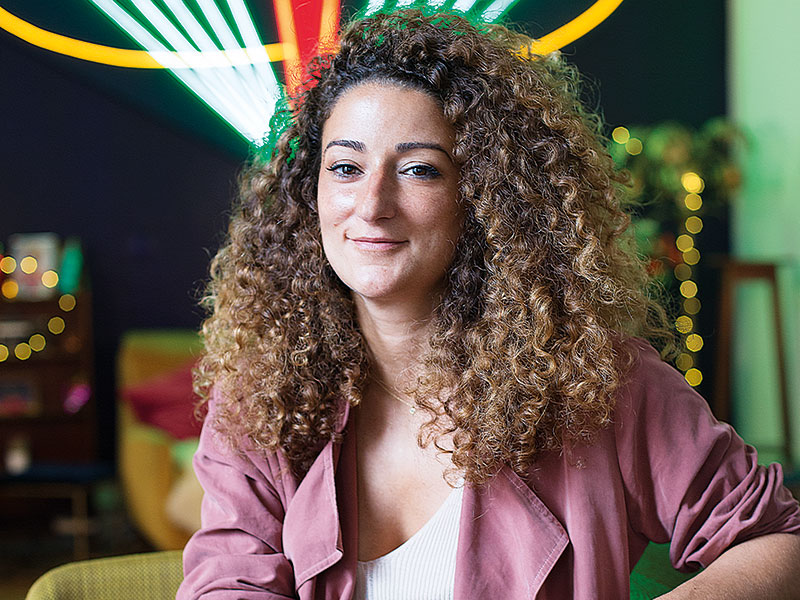 Along with Oussama Ammar and Nicolas Colin, Alice Zagury co-founded The Family, an organisation that supports start-ups in every sense
Profiles

Europe is fragmented. The cultural and political rifts that extend across the continent might get the most press, but its start-up scene is also suffering from a sense of disconnection that is a disservice to the region’s talent. In France in particular, entrepreneurship is often met with unnecessary delays and negativity, making it difficult for start-ups to begin their journey and expand across the continent and beyond.

At a time when some of the best entrepreneurs in the capital were packing up and moving to Berlin, London or even as far as the tech mecca that is Silicon Valley, Alice Zagury set forth on a quest to dissolve what she refers to as “toxicity”. Along with Oussama Ammar and Nicolas Colin, Zagury co-founded The Family, an organisation that supports start-ups in every sense.

The company’s name says a great deal about its ethos: The Family isn’t just a venture capital firm, and entrepreneurs aren’t simply provided with funding. They are brought into a tight-knit community, given business advice and technical help, and are pushed to get to work by a team whose mission is their success.

New rules
Operating in such bold opposition to the status quo has made Zagury a powerful figure in the Parisian start-up scene. But she started out as innovators so often do – in search of fulfilment. “When I graduated from business school in 2008, I was looking to join a professional environment that mixed three things: freedom, creativity and responsibility,” she told European CEO.

Coming from a family of creatives, Zagury started her career in the art world. After a stint at a gallery, she moved on to a design agency before stumbling across a non-governmental incubator for artists and engineers. “I thought the artistic part of the job would bring me joy, but really I got pushed into a whole new world… I discovered tech communities: hackers, open-source defenders and start-up founders,” Zagury explained. “To me, they were artists.”

This was a pivotal time for Zagury; it instilled in her a philosophy that has guided her ever since. The first pillar of this philosophy, she explained, is a ‘pay it forward’ culture: “This attitude clashed with a deeply rooted pattern that I hated, a pattern that I had found at school, at work and in any public office: namely, distrusting everyone at first sight.” The encouraging atmosphere she found at the NGO inspired her: finally, Zagury had found a way of working that she felt comfortable with.

Next was the thrill of creating something from scratch. “No matter where you come from, everybody’s the same when you start a business in tech,” Zagury said. “Money isn’t the barrier: what’s most important is your passion to learn, test, fail and try again.” The third aspect of her philosophy is, in her own words, the drive to “just f*****g do it”.

This last element was invaluable when she was first exploring Paris’ tech scene. When meeting industry players and striking up connections, nobody asked who she was, what she had done previously or who she knew. Actions spoke louder than words, sparking a cycle of trust and confidence in Zagury that fed itself. A family affair
To manage the first start-up accelerator programme in France, Zagury initially tried to replicate Paul Graham’s ultra-successful Y Combinator. “I quickly realised that Silicon Valley wasn’t France,” Zagury said. “Mentors, investors and entrepreneurs weren’t the same, not at all.” She realised that the concentration of knowledge, experience and capital within the San Francisco Bay Area provided the ideal conditions for a virtuous entrepreneurial ecosystem. Paris, on the other hand, was still dominated by “paternalism, elitism and the fear of failure”.

Meeting Ammar (a serial entrepreneur with first-hand experience of Silicon Valley) and then Colin (a writer known for his work on the digital revolution) set The Family in motion. “Together, we could design a programme tailored for entrepreneurs in a particularly toxic environment and focus on what was necessary: education, tools and access to capital,” Zagury explained.

Today, 100 start-ups from all over Europe join The Family each year. “They usually get to know us from the videos on entrepreneurship we release on our YouTube channel, then they attend some of our conferences in our offices in Paris, London and Berlin, read our content online and decide to apply for a more personalised relationship,” Zagury said.

After an online application, those start-ups taken on by the company are fully initiated at a three-day weekend event hosted in a castle just outside of Paris. “It’s a good mix of what The Family will provide [throughout] the life of their start-up: private office hours, peer-to-peer learning, amazing dinners and cool activities,” she explained. The objective of these weekends is to engender trust, enabling those participating to feel they can ask anything of their new mentors.

Different from the rest
The first two months are crucial for both parties; objectives set out at the start are closely monitored. Once this initial period is up, entrepreneurs decide whether to part with five percent of their equity in exchange for partnership with The Family. Zagury clarifies that they can withdraw whenever they want, stating: “It’s key to making sure we only have transparent and respectful relationships with our founders… We see ourselves as minority but strategic shareholders, dedicated to the success of our start-ups. We’re like ‘warriors on demand’ – any aspect, any problem, anything – we’re here to help.”

The value that founders first find is the amount of time they save by working with The Family and having a robust support system in place. Zagury explained: “After several months, they discover how being among The Family, surrounded by a dedicated team and other ambitious entrepreneurs, can change their whole game.”

This spirit of community and encouragement is what makes The Family markedly different from venture capital firms. The ample content made available for free online is further evidence of the supportive environment the company works hard to cultivate.

Zagury’s unique approach is working. Since its launch in April 2013, The Family has worked with hundreds of start-ups, helping them raise some €350m in the process. Those of note include: Algolia, a powerful ‘search as a service’ (SaaS) solution that works out of San Francisco and Paris; FretLink, another SaaS marketplace that connects thousands of transportation companies with those needing their services; and PayFit, a software company that makes it easy for users to pay their employees. The two latter companies are now expanding across Europe. Side, a platform that enables university students to find hourly jobs that fit around their schedules while helping businesses to find fresh talent in the process, is another example.

Zagury listed more of The Family’s exciting partners: “In hardware, Agricool grows incredibly tasty strawberries from containers you can put anywhere, and just recently brought in their first harvest in Dubai. Stanley Robotics is a robot valet for your car, [and] Shanty Biscuits is growing a cookie empire, putting whatever you want to say on a cookie and sending it to you fast. In the UK, we’ve got Homie taking all the hassle out of renting a flat and Carcela’s peer-to-peer car sales upending the dealership model.”

Stronger together
Along the way, Zagury has found that, rather than collaborating to take advantage of one another’s attributes, European capitals tend to stay independent when it comes to start-up development. In Paris, for example, there is an abundance of designers and engineers, but the city lacks London’s capital and Berlin’s scalability. Zagury finds this fragmentation tiresome, particularly given the cities’ proximity to one another. “Even though it’s totally normal for a CEO in San Francisco to fly to [New York City] for a business meeting, it’s not the same for an entrepreneur in Munich going to Barcelona,” she explained.

As such, Zagury is determined to encourage the flow of people inside Europe. To this end, The Family will soon start touring 10 new European cities, holding conferences and offering its time to local founders seeking growth. “Copenhagen, Tallinn, Amsterdam, Brussels, Madrid – we’re eager to break down these barriers,” she added.

Naturally, the assortment of languages, cultures and legal systems in Europe is a reality that must be acknowledged, and yet embracing this diversity is what could propel start-ups to the next stage in their growth. “It’s what makes Europe so strong, not only economically, [but also] strong in the sense of the wealth of its cultures, lifestyles [and the] strong differences from one place to another,” Zagury explained. “And it’s not a small detail. How can you be innovative when everybody around [you] thinks just like you?”

Rather than collaborating to take advantage of one another’s attributes, European capitals tend to stay independent when it comes to start-up development

She told European CEO: “Some amazing start-ups in Europe have actually managed to use that fragmentation in a very efficient way, like Taxify against Uber, for instance.”

While start-ups in Silicon Valley are pioneers in many fields, Zagury believes that their European counterparts can learn from them and leapfrog ahead. She puts this down to having in-depth local knowledge, which enables them to adapt proven innovations to the environment they operate in. “It’s important because: one, a product designed by locals will reflect local values; and two, it will empower local communities,” Zagury said. “It’s not about being nationalistic, it’s thinking in terms of creating virtuous local ecosystems.”

Using the multifarious nature of Europe as an advantage, not a hindrance, has become ever more crucial given the digital revolution that is “shaking up the entire world”, according to Zagury. She added: “Tech entrepreneurs aren’t lonely pirates building their things off in a corner any more, ignoring the old world. They need to stand for a certain vision of society because they are actively changing it with their solutions.”

With the likes of Google, Apple, Facebook and Amazon dealing with legal challenges aplenty at present, it has become all too clear that tech companies have a responsibility in terms of the societal role they now play. This charge can be faced head-on, but only if entrepreneurs are provided with the tools they need to continue disrupting the status quo.

Despite the problems of the not-too-distant past, the start-up scene in Europe is beginning to alter, thanks in large part to the stewardship of individuals like Zagury. Launching a start-up is easier than ever before: from the millions of euros required two decades ago, just thousands are needed to found a company today. Free tools are available online to assist work processes, while technology has progressed rapidly, enabling the democratisation of innovation. Support systems are also available, offering advice and providing the invaluable connections that are usually only built with time.

The Family offers a new model of education for entrepreneurs. Through a well-maintained website, regular conferences and a frequently updated YouTube channel, any would-be founder can discover a foundation of knowledge and, crucially, inspiration with The Family. And for those who are serious about achieving their vision, The Family opens its arms, dispelling the toxicity of the past and welcoming them into an environment where the only thing holding them back is themselves.