Heineken CEO Jean-François van Boxmeer spent his formative years in Africa, learning emerging markets are the future for European brands. His unique insights have paid off 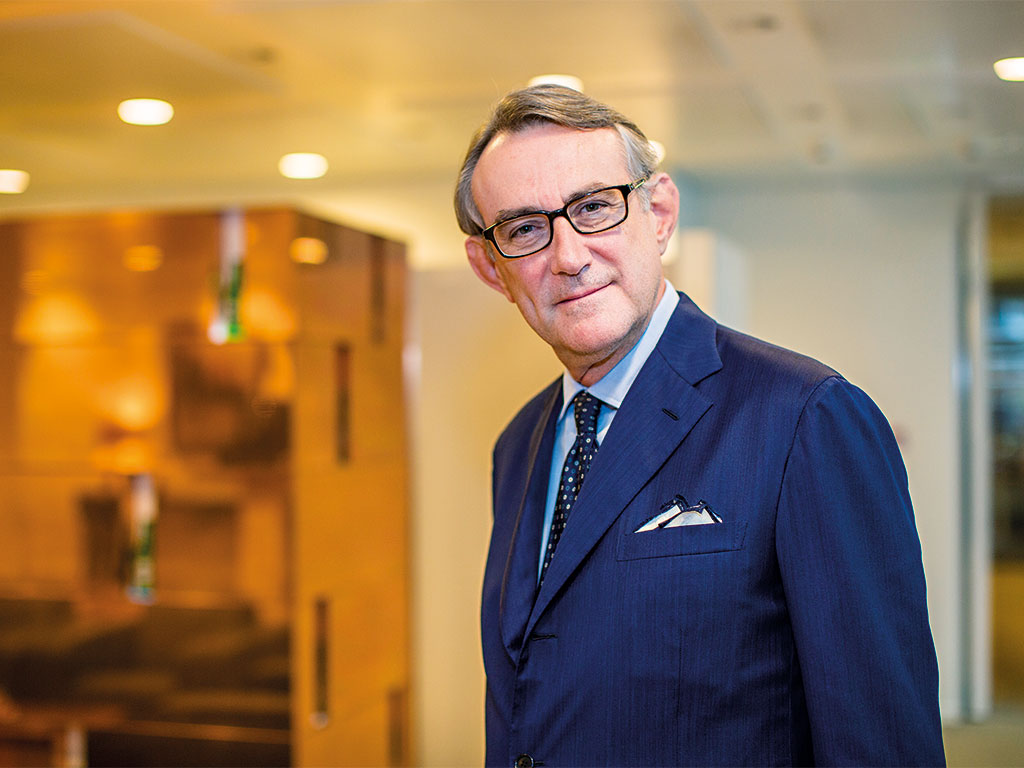 The UK’s internal debate over its EU membership often attempted to counterpoise the idea of either selling to Europe, or stepping out into the world to trade with emerging markets. Europe was often portrayed by the Leave campaign as a place of yesteryear, and the suggestion was that UK businesses would find better trading prospects outside of the union. Europe’s market was not quite painted as irrelevant, but as less and less important in a world of rapidly growing emerging markets. The Remain campaign, on the other hand, argued access to these emerging markets in Africa and Asia could be better achieved as part of a wider union.

The path less travelled
Whichever side of that debate will ultimately be proven correct remains to be seen. Regardless, it is certainly true that many European firms certainly see their futures lying with non-European markets. Dutch brewer Heineken is one of the most significant among these: the company is looking southwards beyond the Mediterranean, and eastwards over the Ural and Caucasus Mountains, to the rapidly growing economies of Asia and Africa, where it sees the best prospects for expanding its customer base. Much of this forward-looking, global approach is the result of the boldness of the company’s CEO, Jean-François van Boxmeer. As CEO of Heineken, he has been a forthright advocate of tapping into growing emerging market demand.

As CEO of Heineken, Van Boxmeer has been a forthright advocate of tapping into growing emerging market demand

Although Van Boxmeer spent much of his career working for Heineken in many different African nations, he began his time at the company in the Netherlands, in 1984. He joined the company after graduating with a master’s degree in economics from what is now the University of Namur. Van Boxmeer started as a trainee, rising through the ranks quickly, and in 1987 began working around the world, with a heavy focus on African countries. Such was the breadth of his reach that, at one point, he simultaneously held the roles of Sales and Marketing Manager in Rwanda and General Manager in the Democratic Republic of Congo.

This unusually broad international experience led to his being promoted to the executive board of Heineken in 2001. Finally, on October 1, 2005, Van Boxmeer was appointed Chairman and CEO of Heineken.

Coming up hard
When he joined Heineken, Van Boxmeer did not expect to be sent out to Africa. Speaking at McKinsey & Co in 2014, he said: “I was sent by Heineken, a little bit by accident, to Africa.” It was primarily his French-speaking ability that saw him tasked with the mission. This made him a good candidate for the company’s expanding operations in francophone Africa. “I was speaking French, and there weren’t that many French-speaking guys around in Heineken, so I was sent to countries like Cameroon and Rwanda, and the former Zaire, which is now the Democratic Republic of Congo.”

Accidental or not, the experience had a lasting impact on Van Boxmeer, influencing his mindset and the direction he has taken the company. “The years between 25 and 35 – those are the years where you are the most prone to change, to learn. You behave more like a sponge. And in my case, that happened in Africa.” Working in Africa certainly provided a steep learning curve for the CEO. “I spent 10 years of my life there. Those were very exciting years where, beyond leading a commercial organisation, you also had to deal with a lot of societal problems, emergency problems, all kinds of things you were unprepared for.”

Van Boxmeer was stationed in Rwanda just before the infamous genocide took place in the country in 1994, when many of the company’s local employees were caught up in the carnage. Although Van Boxmeer had relocated to the Democratic Republic of Congo by the time the violence broke out, it still had a marked impact on his life: the Rwandan genocide resulted in a wave of refugees fleeing the violence, destabilising the Democratic Republic of Congo. Rather than shying away from the conflict in Rwanda and resulting destabilisation of its neighbour, Van Boxmeer utilised Heineken’s resources to help those in need.

“They were extraordinary people with an extraordinary energy in very adverse conditions, and that has shaped me”, he said. According to Business Insider: “As General Manager of Bralima, Heineken’s business in the Democratic Republic of Congo, Van Boxmeer decided the company would help all [refugees] to find shelter and provide for them and their families, as they were deprived of their income in Rwanda.” It was a financial hit for the company, but one Van Boxmeer was willing to take. “If you work with people, you have no other choice than to give, or you’ll fail. It’s very important, even if it isn’t easy, because the larger the company, the larger the stakes. But you have a social contract with your own personnel. It’s one of the crucial elements for a leader to remember and live by.” More than anything else he went through, the experiences, challenges and tests of working for Heineken in the Democratic Republic of Congo and Rwanda moulded Van Boxmeer as a professional.

Political turmoil aside, working in the Democratic Republic of Congo also meant navigating an increasingly unstable economy. Dealing with this tough environment proved a further test for Van Boxmeer. During his time there, the country was experiencing hyperinflation – a dreaded situation for any business.

“For sure, I couldn’t sweep the hyperinflation under the rug”, he told Business Insider. He was forced to, in his own words, “surf the wave, because I couldn’t break the wave…I delivered my own goods, and then made sure I got paid. It’s what I did: I delivered the beer, and asked to get paid the day price on arrival. I took the exchange risk, but not the credit risk. I preferred it that way, rather than asking for dollars and risking not getting paid, or not being able to deliver myself. Luckily, it worked out well”.

Targeted growth
While Van Boxmeer’s time in francophone Africa taught him a lot about business, it also gave him a key insight into where growth for his company’s product will come from in the future. A career spanning numerous emerging market nations seems to have been a key driver in his belief that the future of Heineken lies in sales in Africa and Asia. To this end, the brewer has made a number of acquisitions and deals in emerging markets over the past few years, including a merger with FEMSA, a leading South American brewer, and a partnership with the Indian company S&N.

Considering global trends, this pivot towards emerging markets makes sense; the market for beer in Africa is expected to grow five percent between 2013 and 2017, while at the same time Europeans are consuming 8.5 percent less beer than they did before the 2008 recession, and production in the continent is down by six percent. There is a general trend towards growth in beer sales in emerging markets. A decade ago, a mere 20 percent of Heineken’s business came from emerging markets; now it accounts for two thirds.

This strategy of focusing on emerging markets seems to have paid off, although it has not been smooth, which is reflective of increasingly gloomy emerging market economic conditions. Headwinds in the global economy have both caused and been perpetuated by a general slowdown of emerging market growth in the past few years. And, inevitably, this has been reflected in some of Heineken’s sales figures.

In 2015, it was reported the brewer had seen robust sales from emerging markets, with a particularly strong demand for its premium brands. As The Wall Street Journal reported at the time: “Net profit was €1.14bn in the first six months of 2015, up 88 percent from the €631m a year earlier. Consolidated revenue rose seven percent to €9.9bn from €9.3bn.” This beat many expectations for the company’s performance. Despite a slowdown in demand from Europe, its focus on emerging markets was cited as the reason for these strong figures. While western Europe saw negative organic growth in 2015, all other regions saw at least one percent organic growth.

Heineken’s revenues grew by 6.5 percent to €20.51bn through the year so far

Figures released in 2016, however, have not been so positive for Heineken: revenues grew by 6.5 percent to €20.51bn through the year so far, missing the expected figure of €20.57bn. This was not seen as a cause for despair, however. Any disappointing results were held to be down to the challenging external environment, including currency headwinds. Van Boxmeer is still adamant his strategy of focusing on emerging markets is the way forward.

“At the same time we have continued to invest for future growth, by entering or expanding our presence in markets including Myanmar, Ivory Coast, East Timor, Jamaica, Malaysia, Slovenia and South Africa. We are also particularly excited by our new partnership with Lagunitas, one of the leading craft brewers in the US”, he said, according to City AM.

Van Boxmeer had already anticipated such a slowdown in 2015: “We expect further volatility in emerging markets and deflationary pressures in 2015”, the Financial Times reporting him saying, when the rosy figures for 2015 were released. Growth, he anticipated, would be “more moderate”.

In his role as CEO of Heineken, Van Boxmeer has identified the areas of the world ripest for growth, and then pursued them. Although sales have slowed due to recent sluggishness in many emerging markets, the general trajectory in these economies still seems to be positive. Ultimately, Heineken is well positioned to ensure ever-wealthier consumers in the developing world will be thirsty for its brands, thanks in no small part to Van Boxmeer, with his tough business education and deep knowledge of emerging markets.