With almost 150 years of history behind it, Piaget is a Swiss watchmaking institution. CEO Chabi Nouri’s focus on e-commerce and emerging market trends is helping to ensure the brand will be around for many years to come 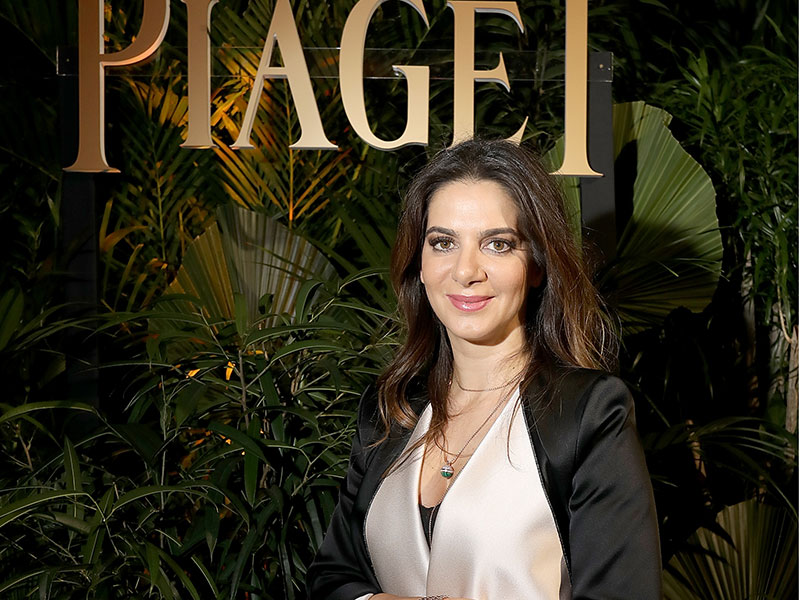 For a brand that started life more than 140 years ago based out of a family farm in the small Swiss village of La Côte-aux-Fées, Piaget has come a long way. Now part of Richemont, the world’s third-largest luxury goods brand, the company contributed to sales of $13.99bn (€12.48bn) in the 2018/19 financial year, alongside other well-known brands such as Cartier and Montblanc.

Tradition plays an important role for many luxury brands, but it’s vital that it is not allowed to stand in the way of innovation. Throughout its history, Piaget has been willing to take risks. Having started out building precision components for other watch manufacturers, in the 1920s the firm decided to begin making its own luxury watches. It was a move that would prove hugely significant for the company and the watchmaking industry as a whole.

In 1957, Piaget unveiled the Calibre 9P, a 2mm-thick, mechanical, hand-wound watch that began the company’s association with ultra-thin watchmaking. Ever since, the brand has continued innovating, moving into jewellery creation and becoming known for its artistic collaborations and elaborate launch events.

The brand has also come to be associated with strong leadership; in 2017, Piaget announced that Chabi Nouri would become its new CEO. Bringing a wealth of experience from the world of luxury goods – she spent more than 10 years at Cartier – Nouri has placed a focus on the brand’s jewellery segment to remind the world that Piaget is more than just a watchmaker. So far, the decision is delivering impressive results.

Bucking the trend
Although retailers in general have experienced a challenging time of late, facing disruption from online outlets and concerns relating to the global economy, the luxury goods market continues to go from strength to strength. For the fiscal year ending June 2018, the top 100 firms in the luxury goods sector collectively saw profits rise by 10.8 percent year-on-year.

Tradition plays an important role for many luxury brands, but it’s vital that it is not allowed to stand in the way of innovation

“[Brick-and-mortar] retail is undoubtedly in the doldrums as more people shop online and because of growing economic uncertainty,” explained Sukhi Jutla, co-founder and COO of MarketOrders. “But the luxury goods sector, and the jewellery market in particular, has largely been insulated from the downturn.”

Partly, this is because jewellery – especially at the high-end – carries a strong emotional resonance, and so is not subject to the same downward pricing pressure as everyday items. Piaget has been able to capitalise on this as a direct result of Nouri’s commitment to the brand’s jewellery items. Although Piaget began life as a watchmaker, jewellery has long been an essential part of the company’s product line, often being incorporated within its timepieces.

Last year, Piaget relaunched its Possession jewellery range with a new open bracelet design, bringing one of the brand’s iconic pieces from the 1960s into the present day. In the same vein, Nouri has championed the fusion of watchmaking and jewellery at the company, helping to launch the Possession watch during 2018’s Salon International de la Haute Horlogerie in Geneva.

Nouri also has a strong understanding of the importance of good promotion – though this is hardly surprising given her previous marketing positions at Cartier, British American Tobacco and at Piaget prior to becoming CEO. She has continued to make the most out of the brand’s celebrity ambassadors, including Jessica Chastain, Michael B Jordan and Ryan Reynolds, and has worked hard to deploy them in new ways, creating engaging content for new and existing customers.

Last year, Piaget created a short film starring Chinese actor Hu Ge to advertise its Altiplano range of watches. The decision to use Hu as part of the brand’s marketing drive was particularly astute given current market trends: China’s luxury goods sector posted a growth rate of 20 percent across 2017 and 2018, and the country will continue to drive sales in the industry for the foreseeable future. Tailoring campaigns to this particularmarket is a shrewd move.

“Behind every great brand, there are a lot of passionate, enthusiastic and forward-thinking individuals who lead that brand,” Nikolay Piriankov, CEO of luxury London jewellery brand Taylor & Hart, told European CEO. “We’ve always believed that great companies are all about great people. Any great team works perfectly in sync and the leader is there to encourage that happening. Leadership is, after all, the action of leading employees to achieve goals. It plays an essential role in employee performance and, therefore, in company performance.” Nouri’s leadership certainly deserves praise, but her promotion in the first place demonstrated that Piaget was a company unafraid to do things differently. “The appointment, two years ago, of [Nouri] as CEO of Piaget, was a strong signal of intent, both in terms of culture and talent attraction, and in a category where we see new growth in women’s watches, and where the very lines of gendered product are increasingly blurring,” Rebecca Robins, Head of Global Luxury and Fashion at Interbrand and co-author of Meta-Luxury, told European CEO.

In 2016, Richemont’s chairman, Johann Rupert, told investors that he wanted to see “less grey men, less grey Frenchmen” in leadership roles. The decision to promote Nouri, who is of Iranian descent, to the position of CEO shows that the group was serious about improving diversity. It is now reaping the rewards.

The little things
Throughout her time as CEO, Nouri has stressed that Piaget is a brand with a great history; its pedigree of technical sophistication has been championed at every opportunity. At the same time, she has been a leader keen to look forward, as well as back.

Piaget has been making ultra-thin watches for decades now, and is known as a leader in the field. It is difficult not to be impressed by the craftsmanship required to create a precise timepiece that is sturdy and reliable while only being a few millimetres thick. Even so, customers are always demanding more.

At Piaget, these needs were met earlier this year through the latest additions to its Altiplano range of watches. These timepieces echo the brand’s ultra-thin heritage but now include meteorite dials to give the product a modern twist. The decision to use meteorites – originally formed in the early days of the Solar System – is not one taken lightly. Meteorites that are of a suitable size can be difficult to source, and working with them is not easy; the likelihood of them fracturing during the manufacturing process is high.

For Nouri, however, creating the meteorite watches was a challenge that Piaget’s master craftsmen were up to. The result has been a truly unique product range: as each meteorite has a different internal structure made up of interlocking nickel-iron crystals, known as Thomson structures, no two dials are the same. Despite the fragility of the material, Piaget managed to create a range that is true to its past, with some of the watches measuring just 3.65mm thick.

“Piaget is a meta-luxury brand at the deep confluence of craft, focus, legacy and rarity,” noted Robins. “In sharp contrast to the world of smartwatches, where products are designed for obsolescence, these creations are designed for life, to live across generations. What’s distinctive about Piaget’s creations is the design language. The ultra-thin style has become inimitable in the language of watch design, and that defining aesthetic remains an intrinsic element of the brand’s DNA.”

Another way Nouri has revamped the business is through her appreciation of emerging industry trends. The chief executive has been a champion of e-commerce throughout her career, as evidenced by a new collaboration with Net-a-Porter. The online retailer launched EIP Privé earlier this year, creating an invitation-only service that makes high-end jewellery available to only its most loyal customers. Piaget is one of just a handful of top jewellery makers to be featured.

In addition to delivering one-of-a-kind items, exclusive collections and private viewings of rare jewels, EIP Privé will also allow Piaget customers to customise pieces, ensuring they are unique and personal to them. What’s more, it also solves one of the main issues facing high-end goods in the online sphere: namely, that customers are worried about the safety of their products while in transit. With EIP Privé, Net-a-Porter and Piaget offer secure pick-up and hand delivery in more than 170 countries.

“It is essential that long-established luxury brands embrace digitalisation and e-commerce,” Piriankov said. “Consumer behaviour has changed drastically in the last few years and brands need to learn how to adapt to those changes and find as many digital touchpoints as possible. But for luxury retailers, many potential customers are only researching online. A much smaller number of people are comfortable making that final purchasing decision online. Most of our innovation is focusing on bridging the gap between those early researchers and us.”

Under Nouri’s guidance, Piaget has bolstered its e-commerce channels, both in the US and China, while strengthening customer relationships through social media channels and its Piaget Society events. Although the industry has certainly faced disruption over the last few years, Nouri understands that some things about the retail experience remain the same: for customers to make a purchase, they first have to be engaged.

Standing the test of time
For a brand like Piaget, artistry has always been a core focus. This is clear when admiring the company’s timepieces, which combine functionality and style, or when viewing its iconic pieces of jewellery. This is why the brand has a long history of collaborating with the art world.

In 1967, Piaget worked with Spanish surrealist Salvador Dalí to create watches, cufflinks and earrings and, over the years, the Swiss firm has also forged close ties with the likes of leading pop artist Andy Warhol, photographer Richard Avedon and many other artists besides. In 2019, for the 58th edition of the Venice Biennale, Piaget continued this fine tradition by working alongside Dutch designers the Verhoeven Twins on numerous artistic works, titled Moments of Happiness.

As part of the collaboration, Piaget gave the artists free rein to indulge their creative sensibilities. The twins created a dozen or so artworks made of industrial glass shaped like soap bubbles drifting through the gallery space. The only addition made by Piaget was a gold fixture to hold the artworks in place, reflecting the brand’s long association with goldsmithing. Although the pieces were entirely new constructions, they embodied the spirit of the brand’s long-running ‘Sunny Side of Life’ campaign.

Nouri has proven herself adept at balancing the two strands of the company’s product line. At the same time, the CEO realises that the brand is just as much about the future as it is its illustrious past.