Heading up the world’s largest food manufacturer carries a lot of responsibility. Thankfully, Nestlé CEO Paul Bulcke is very aware of the importance of health, though his stance on water still raises a few eyebrows 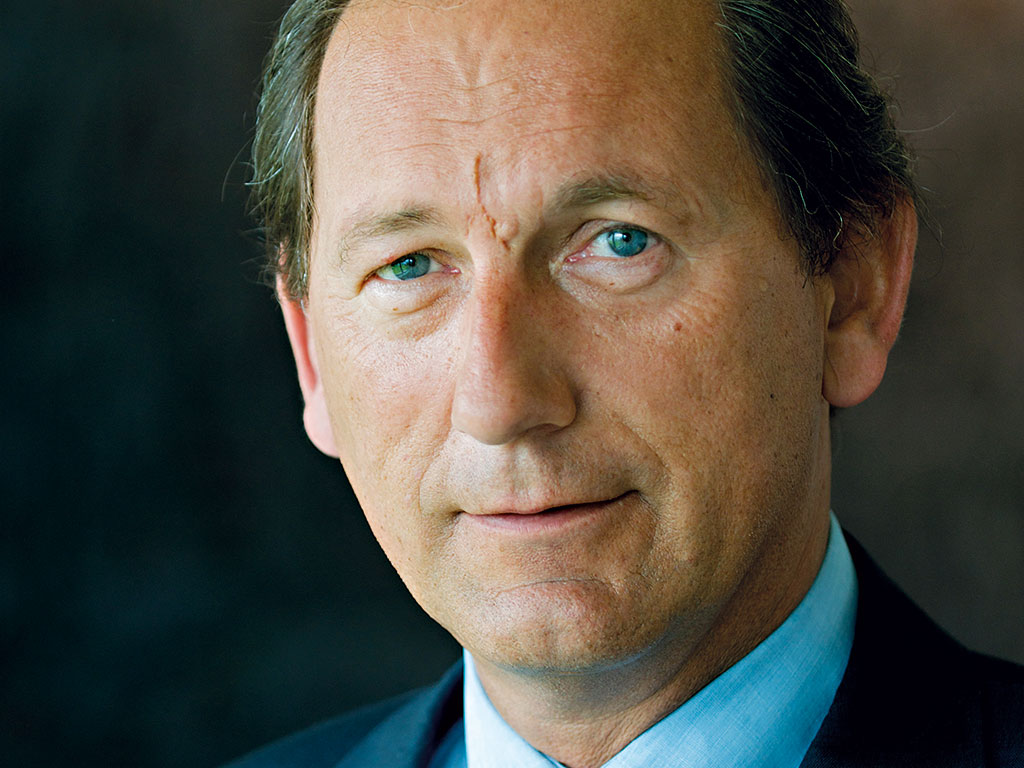 Nestlé’s Paul Bulcke, whose leadership focuses on putting the right people in the right places - and fosters a culture of trust
Profiles

Nestlé is the world’s largest food and beverage company. It sells more than 1.3 billion products each and every day. In 2014, total sales came in at a whopping $92.5bn, helping the company grow organically by as much as 4.5 percent. 2015 is set to be another landmark year for the company, with the Swiss multinational expecting five percent growth by improving margins and continuing to adapt to the shift in consumer habits as demand for healthier products continues to rise. But, what makes these figures all the more impressive is that the company has achieved year-on-year growth in one of the toughest economic environments in history.

Despite its success, Nestlé’s leader is rather humble about it all. According to CEO Paul Bulcke, strong results like these are a natural by-product of a company that is demonstrating its intrinsic strengths and communicating a simple, universal message that can be shared and understood by customers and employees alike.

“What is my job? It is to have the right purpose that people share, so it has to be simple”, stated Bulcke, when asked how he is able to lead an organisation the size and scope of Nestlé during an interview with Fortune. “It’s a little bit like writing a song sheet all people from Nestlé can sing from…and then a very important thing too is to have very explicit values as a company – that’s my job.”

EXPERIENCE
1979: Having studied engineering and gained some experience as a financial analyst, Bulcke joined Nestlé at the young age of 25

1996: After nearly 20 years of diligent work, he was rewarded with his first major role, becoming head of operations for Portugal

2000: Following a successful Portuguese stint, Bulcke was moved over to the larger, more complex market of Germany

2008: Having moved on to head (and improve) Nestlé’s American operations, he was then named CEO of the entire group

For Bulcke, leadership is all about having the right people in the right places. In the interview, he went on to explain how the Swiss multinational is a relatively flat organisation, with each market lead by individuals that he describes as “the ultimate caretakers” of the company.

“At the end of the day, our purpose is very simple, and everybody, [whether] a salesperson in Africa or somebody in a factory in Ecuador, should understand that. And I think that is the trick or the secret answer to how you align so many people. This is not a one man show.”

Nestlé, like all great businesses, has a management style based on trust. It would be impossible to micromanage a company of its size, even with full confidence in those around you. However, over the years the Swiss multinational has been plagued by criticism and controversy over its business practices, the safety of various activities and, most recently, its stance on water privatisation. However, what is more interesting is how Bulcke and his team have managed to drive what was already a colossal company to even greater heights and helped it to reconnect with consumers the world over.

Watery woes
Considering that Nestlé is the biggest food and beverage company in the world, it’s no surprise that they are concerned about water. The commodity is necessary to produce practically all of its products, which include the highly popular Nescafé coffee and the chocolate-covered wafer biscuit bar KitKat, to name just a couple. It is also the key ingredient in one of the company’s most successful products – bottled water.

However, the company came under attack in 2012 for its views on water privatisation, in a documentary film called Bottled Life by Swiss filmmakers Urs Schnell and Res Gehriger. The general purpose of the film was to demonstrate that water privatisation would lead to an exhaustion of water resources. The film generated a lot negative press for Nestlé, most of it aimed at the company’s ex-CEO and chairman, Peter Brabeck-Letmathe, due to a clip in the film that shows him discussing how the concept of water as a human right is an extreme position, with the film leading viewers to believe that Nestlé, as a company, is against this concept altogether.

In response, Brabeck-Letmathe attempted to clarify his position in an open letter posted on the Nestlé Waters website. “Water required for drinking and basic hygiene is without question a human right; i.e. a minimum of 25 litres per day per person, or 1.5 percent of global water withdrawal. It is the fundamental responsibility of governments to ensure that the population is supplied with this amount of water, and it is unacceptable that today this is still not the case for more than 800 million people. On the other hand, I am not of the opinion that the other 98.5 percent of fresh water used – including for the watering of golf courses and for carwashes – is a human right. We need to act more respectfully when dealing with our most precious resource; wasting water will not cease as long as water has no value.”

Nestlé’s current CEO is also a strong advocate for giving water a value in order to try and curtail the amount used each and every day. In 2012, during a speech at the annual World Water Week event in Stockhom, Sweden, Bulcke urged governments around the world to start looking at ways in which to tackle the global water shortage, which many scientists argue will become a major issue over the next few decades.

Driving diversity
In a global company like Nestlé, diversity is essential for it to be prosperous, particularly in emerging markets where having people on the ground who understand local trends and business practices often makes the difference between success and failure. One area where the company has flourished is in promoting gender balance within business – something that is reflected in Nestlé’s ongoing commitment to the UN’s Women’s Empowerment Principles.

In order to encourage more women to join its workforce at all levels, the Swiss multinational implemented its Gender Balance Initiative. The programme is designed to help the company create a more gender-balanced business environment, but actively tries to promote individuals based on their abilities, rather than gender alone.

In fact, Bulcke has been very outspoken about his dislike of quotas as a means of reaching gender balance within the company, and has said that numbers and percentages are not the only factor in determining diversity within a business.

“In our gender balance strategy, we think it’s very important that women should not be required to think and act like men”, explained Bulcke during an interview with Egon Zehnder, an executive search and talent management firm. “They should be allowed – encouraged – to think and act like women. One crucial step here is to make it easier to combine work and family. That includes flexible working time models for parents, access to childcare, understanding that not all careers are linear, and little things like a last-minute shopping service with delivery in the office”, said Bulcke.

“Management positions at Nestlé and other companies invariably involve frequent relocations and international assignments. In families where both partners are pursuing careers, it is hard to synchronise these dual career moves. Now, we provide active assistance”, he added.

So far, Bulcke’s efforts at fostering gender balance at Nestlé have been successful, but he admits that the process is ongoing and must be nurtured in an organic manner. Under his leadership, Nestlé has improved the representation of women in a number of areas, most notably within its management teams. In 2014, 33.7 percent of all of its leadership positions were held by women, up 2.7 percent from the previous year.

Customer connection
Consumption habits, particularly around food and drink, have changed a lot over the past two decades. People demand simpler and healthier options. For many food companies, Nestlé included, keeping pace with consumers’ changing demands has been extremely difficult.

Nowadays, consumers are often concerned with the ethics of food production and want companies to deliver products that are ‘natural’ and, above all, free from anything that can be deemed artificial. This has posed a real challenge for Bulcke and his team, as it requires entire lines of products, especially snack foods and soft drinks, to be rethought and rebranded in order to meet the demands of the market.

However, the pressure to change is not coming from the public alone. Food companies like Nestlé have to respond to governments who want to tackle the growing obesity epidemic that is going on throughout many developed economies around the world. According to the WHO, without food companies’ willingness to change food, more than 370 million people worldwide will become diabetic.

In an attempt to respond to consumer and government concerns, in 2015 the company invested more than $50m to build a new research and development centre in Salon, Ohio in the US, with the intention of improving its frozen and chilled food products.

“What we’re seeing is consumers really do want nutritious products, but they’re not as focused on salts and fat as they were a few years ago”, said Sean Westcott, director of Nestle’s research and development centre in Ohio, in an interview with Food Business News.

“A lot of communication around low sodium or low fat can lead to perceptions of low taste”, added Westcott. “What we found is, if we focus on what we’re doing with nutrition, health and wellness and on what the consumer values in the product — how we make the product creamier or crisper, how we make the flavour more impactful — those are the things consumers identify with, and often we can achieve the two things at the same time.”

Bulcke’s response to changing market trends has been crucial in helping the company navigate the difficult economic times that the world finds itself in at the present moment. He is also hoping that, by investing heavily in the development and improvement of Nestlé’s product lines, he will be able to connect with a new generation of consumers that put health as a priority in the food they eat.