Following in the footsteps of one of the most highly regarded and successful CEOs in Britain, the Tesco head has much to live up to 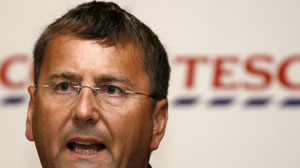 From humble beginnings, stacking shelves at his local supermarket as a schoolboy, Tesco CEO Phillip Clarke has risen to become head of the third most powerful retail group in the world, no mean feat for the son of a store manager from Liverpool.

Like his predecessor Sir Terry Leahy, Clarke is a born and bred Tesco man, having worked his way up the ladder from the shop floor via the Tesco Management Training Programme. In this sense, he is also literally ‘keeping it in the family,’ following in the footsteps of his father, a store manager of a Tesco branch in the Wirral for many years, who gave Clarke his first job in 1974.

Those who know Clarke describe him as someone with a down-to-earth personality and a positive, pragmatic approach. It is widely reported that he is an avid Liverpool Football Club supporter, which no doubt helps him to build rapport with staff. One market analyst at Execution Noble, Caroline Gulliver, described him as a “Tesco man through and through… who comes across as very personable, talented and dedicated”.

The story goes that he was handpicked by Leahy to be his successor; Leahy stepped down in 2011 after 15 years at the helm, leaving Clarke with a legacy that may prove tough to follow, given the current economic climate.

Himself a Liverpudlian, Leahy is well-known in supermarket circles for having turned the fortunes of Tesco around, tripling the groups profits and transforming the supermarket brand from a ‘cheap and cheerful’ food store to an international retailing empire spanning 14 countries and offering everything from Tesco’s Finest gourmet foods to a range of additional products, including electronics, books and CD’s, to an ever-growing customer base.

No doubt Clarke’s degree in economics will help him to negotiate his way through the choppy waters of the current financial climate, as will his previous roles within the organisation as head of IT and international expansion, according to analysts. During his career, to date, he also seems to have spent time learning other aspects of the business, including roles as Director of Supply Chain and Logistics, all of which means that he has accumulated an exceptionally well-rounded knowledge and experience of how the business operates and is well-placed to steer the Tesco ship through the coming years.

Some in the City have expressed their concern about whether Tesco can continue to grow at its current pace and seem to think that it would be a mistake to move the company’s focus away from core UK business in favour of further overseas expansion. The group’s entry into foreign markets has met with mixed success, their Fresh & Easy stores in the USA, for instance, made a £165m loss last year.

In a recent interview, Clarke seemed keen to reassure critics and investors by reiterating the giant’s commitment to the international market, following a recent take-over of several hypermarkets in South Korea.

“We don’t go round the world planting flags. What we do is look for an opportunity to create value for shareholders and where we have some certainty about that.”

Clarke, 50, lives in Hertfordshire with his wife, Linda and their two children.