Whilst Canada and the UK seem ready and willing to delve into oilsands production, the European Union remains sceptical 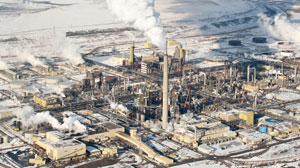 Oilsands crude is oil that is extracted from what is known as oilsand, which contains a mixture of crude oil, clay, sand and other minerals. Sometimes known as tar sand, there are a number of oilsands located around the world. In many places, such as Canada, the development of these sites as a source for crude that can be used in the manufacture of a number of oil-based products is gaining greater attention, prompting legislators, as well as environmentalists, to look a little closer at this energy resource.

The European Union is a good example of one of several interested parties that are making some attempts to introduce legislation to regulate this type of crude source in terms of manufacturing oil based products for both commercial and individual use. Research into the oilsands found in Canada and the potential use of the crude extracted there for use in products marketed in countries that compose the EU is of particular concern. According to reports released by the EU, there are plans to class the product as being high in carbon, making it a greater risk than more conventional sources of crude. Environmentalists are in broad agreement with the findings of the research, which recommends that the oilsands remain relatively undeveloped since extracting it would increase the rate of global warming, as well as create immediate and extensive disruption to the environment in the immediate areas where the sands are located.

Not everyone agrees, however, Alberta and other provinces in Canada have a number of laws and regulations that control the development of the oilsands for crude production, with many of those regulations designed to ensure minimal damage to the environment and the production of a product that is just as high in quality as other sources of crude. The United Kingdom has also backed these efforts and is not in support of the EU prepared report. It does not favour classifying or rating the crude extracted from the oilsands as being inferior or posing a higher risk than other crude sources.

The outcome of this controversy will have at least some impact on developers like Alberta Energy and Shell Canada, both of which are pursuing the development, not only as an energy source for Canada, but also for export to other countries around the world. A number of smaller companies based in other parts of the globe, which have equitable amounts of oilsands within their borders are also watching the outcome of the EU’s recommendations, even as they explore the possibility of further development of oilsands fields. If demand for oilsands crude falls short of anticipated levels it could mean curtailing some of the development efforts and possibly driving smaller companies out of the market altogether. With more research pending, it is certain that the issue of the quality and environmental impact of the use of oilsands crude will remain on the minds of many people for some time to come.