Overcoming the limits of lifelong learning in a changing labour market

Technological progress continues to reshape the labour market. With an increasing demand for new skills, businesses and policymakers must start rethinking their training programmes 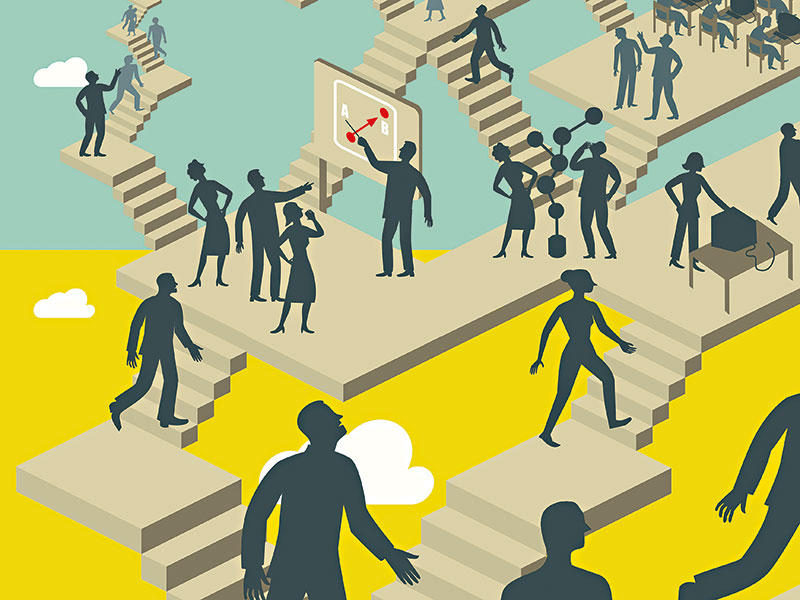 Succeeding in a fast-changing labour market requires workers to be agile lifelong learners, comfortable with continuous adaptation and willing to move across industries
Management

As new technologies continue to upend industries and take over tasks once performed by humans, workers worldwide fear for their futures. But what will really prevent humans from competing effectively in the labour market is not the robots themselves, but rather our own minds, with all their psychological biases and cognitive limitations.

In today’s fast-changing labour market, the most in-demand occupations – such as data scientists, app developers or cloud computing specialists – did not even exist five or 10 years ago. It is estimated that 65 percent of children entering primary school today will end up in jobs that do not yet exist.

Succeeding in such a labour market requires workers to be agile lifelong learners, comfortable with continuous adaptation and willing to move across industries. If one profession becomes obsolete – a change that can happen virtually overnight – workers need to be able to shift nimbly into another.

Barriers to education
Lifelong learning is supposed to provide the intellectual flexibility and professional adaptability needed to seize opportunities in new and dynamic sectors as they emerge, as well as the resilience to handle shocks in declining industries. Training centres, the logic goes, simply need to identify the competencies that companies will look for in the future and design courses accordingly.

In today’s fast-changing labour market, the most in-demand occupations did not even exist five or 10 years ago

Yet, in the eurozone, only about 10 percent of the labour force undertook some type of formal or informal training in 2017, and the share declined sharply with age. If lifelong learning is the key to competing in the labour market, why are people so reluctant to pursue it?

The truth is that reversing the process of skills obsolescence requires overcoming psychological and intellectual barriers that are too often ignored. According to behavioural economics, human beings are biased towards the status quo; we overestimate the potential losses of a deviation from our baseline and underestimate the potential benefits.

Lifelong learning is viewed as extremely costly in terms of time, money and effort, and the returns are regarded as highly uncertain, especially amid technological disruption. Such views may be reinforced by the feelings of depression and hopelessness that often arise when workers lose their jobs or face career crossroads.

If the need to ‘start over’ after years in a certain job or field is demoralising, after decades it can seem like an insurmountable challenge. And, in fact, embarking on such a change late in life runs against our natural patterns of development.

This reflects centuries of evolution. In almost any society, age is associated with wisdom, experience and growing social status. Youth was the time for learning the fundamentals of the profession that one would practise throughout adulthood. Once in that job, a worker would refine their skills as they gained experience, but they would probably not have to learn new competencies from scratch.

Today’s training programmes are ineffective partly because they usually target fluid intellectual abilities. For companies, the conclusion seems to be that retraining a workforce is too challenging, so when new skills are needed, it is better to pursue alternatives like automation, offshoring and crowdsourcing. In its 2015 Economic Report of the President, the US Council of Economic Advisors found that the share of US workers receiving either paid-for or on-the-job training fell steadily from 1996 to 2008.

The assumption that workers, regardless of their age and educational background, will independently do what it takes to keep up with technological change is a fallacy that risks creating an army of unemployed. Such an approach can be expected only of the most highly educated and qualified workers – those whose jobs are usually not even at risk from automation.

New tricks
This may change in the future, because younger generations are growing up with the expectation of lifelong learning. But, in the meantime, policymakers should take steps to mitigate the complicated mental processes at the root of many people’s professional inertia.

For starters, counsellors could help to guide workers through the tumultuous process of skills acquisition and job hunting. For individuals, securing the help of a counsellor would require overcoming feelings of despondency or shame about needing help at all. Moreover, workers may get caught up in what psychologists call the ‘illusion of control’ – our tendency to overestimate our ability to shape events without external support.

If, however, counselling services become the norm, workers are far more likely to take advantage of them. To this end, trade unions and business associations should establish formal mentoring programmes to advise workers on how to progress in their careers or in a transition to a new sector. Employers, for their part, should establish formal feedback processes, not just to evaluate the performance of their employees, but also to assess what skills need to be updated or can realistically be acquired.

In addition, companies should be granted generous tax incentives to boost investment in training programmes. Reflecting the reality of adults’ cognitive abilities, such programmes should aim to transfer new knowledge gradually, while leveraging crystallised intellectual skills. More experienced workers might be less prone to learning altogether new skills than their younger colleagues, but they may excel in other valuable areas, such as problem-solving, self-management and self-motivation.

As we develop robots with increasingly human-like capabilities, we should take a closer look at our own. Only by learning to overcome – or at least evade – our cognitive limitations can we have long and fruitful careers in the new global economy.