With the European manufacturing industry on the brink of recession, companies must employ new digital and service-focused tactics to ensure they remain competitive 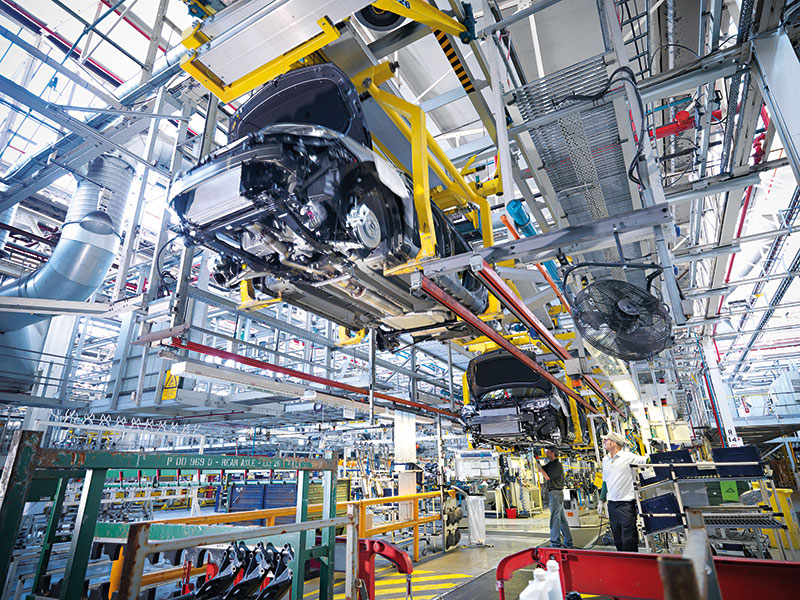 Increasing automation, the shifting of labour to Asia and a push towards the digital economy have all stolen slices of the manufacturing sector’s pie
Industry Outlook

Generating around 14 percent of Europe’s GDP, the manufacturing industry has long been known as the backbone of the continent’s economy. From agrochemicals to automobiles, food to face cream, Europe’s manufacturing capacity not only supports and drives countless businesses, but also makes the continent an attractive trading partner for the US, China and other economic powers.

But change is afoot. Increasing automation, the shifting of labour to Asia and a push towards the digital economy have all stolen slices of the manufacturing sector’s pie, which looks set to shrink further in the coming months. While this may boost the continent’s digital capabilities to a newly competitive level, the shift away from manufacturing also spells trouble for Europe’s low-skilled workers, many of whom rely on steady jobs within the sector for their livelihood.

On the brink
Although European manufacturing has been on a steadily declining path for the past decade, 2018 saw a dramatic drop in output for much of the eurozone. IHS Markit’s Purchasing Managers’ Index (PMI), a key economic indicator for the manufacturing industry, fell for the fifth straight month in December 2018, reaching a new low of 51.4.

By shifting the business model from making and selling a product to delivering a service, manufacturing companies are able to preserve their revenue

A reading below 50 indicates an actively shrinking industry, while a reading of between 50 and 55 highlights a sector that is dangerously near recession. News website Government Europa noted in a January 2019 blog post: “December’s reading marked the lowest for European factories since February 2016, as new orders fell by the highest rate since 2014; hiring of new employees was minimal; and backlogs were run down for a fourth month.”

Italy and France showed the most dramatic decline – both were given individual country readings of 49.2 and 49.7 respectively. In Italy, business confidence in the sector fell to a six-year low and new orders for manufactured goods plummeted, while France saw the fastest fall in output since April 2015, attributed in part to the gilets jaunes demonstrations. Meanwhile in Germany, the eurozone’s largest economy, the PMI slipped to a worrying 51.5, the 11th time that it had declined in 2018.

“They continue to point to difficult conditions going forward, [and] the broader question facing the eurozone is to what extent the weakness in the industrial sector and exports will cross-infect domestic demand, generating a harder landing for the economy. Our GDP growth forecasts for 2019 and 2020 (currently 1.4 and 1.2 percent respectively) have been below consensus for some time, reflecting the likelihood of such spillovers materialising.”

A powerful rival
The success of Europe’s manufacturing industry is directly linked to its, and the rest of the world’s, demand for commercial and consumer goods, which has grown exponentially over the course of the 20th and 21st centuries. However, where Europe was once the go-to trading partner for countries such as the US for manufactured goods, it now has much cheaper alternatives in the Far East.

Likewise, where European businesses may have once opted to produce goods within the continent, many have turned to China. A perfect trifecta of reduced labour and materials costs, along with a greater available workforce, makes the Asian nation a natural choice for companies seeking faster and cheaper production.

To remain competitive, companies must recognise that business models are not monolithic, and must be prepared to be as flexible as possible

“For a lot of European manufacturing companies, if all they do is make a widget, or some industrial heavy machinery, it’s very difficult to compete on cost with lower-cost regions like China,” explained Paul Miller, Senior Analyst at Forrester Research. From a commercial point of view, continental loyalty will always bow down to profit margins.

Moreover, with increasingly capable technological innovations being developed every year, a greater proportion of manufacturing work that was previously completed by human workers is now automated. For instance, Foxconn, the largest contract electronics manufacturer in the world, automated 10,000 human jobs last year and is planning to increase automation in its Chinese factories by 30 percent by the end of 2020. Robotic labour is far less costly and more efficient than its human equivalent, making it a natural choice for many manufacturers.

The tech factor
Increasingly, European manufacturers are realising that the source of sustainable growth is not endless cost cutting, but rather the racking of digital services alongside an existing product. Miller proffers German manufacturer Kaeser Compressors, which has a background in the production of compressed air machines for hospitals and building sites, as an example.

In the past few years, the company has shifted its business model almost entirely from selling machines that make compressed air to renting compressed air by the litre. “All of the maintenance and consumables, and all of the issues with getting machines to and from sites, all becomes Kaeser Compressors’ problem, not [its] customers’ problem,” Miller explained. This means the company is able to charge a premium for the air itself as it’s a much more valuable, hassle-free product.

By shifting the business model from making and selling a product to delivering a service, manufacturing companies are able to preserve their revenue and eliminate cost-based competition with rivals. But this then presents an issue with labour, in that current employees don’t necessarily have the digital capabilities to pivot effortlessly to this new business model. Manufacturing has traditionally been seen as a safe haven for Europe’s low-skilled workers, as the process-driven, manual nature of most employment in the sector can be learned on the job, and does not require any prior academic knowledge.

Shifting to a digital, service-driven system, then, requires a comprehensive reskilling of a company’s workforce. Firms across Europe have already embarked on this ambitious undertaking, supported by a number of governmental and Europe-wide initiatives, such as the European Commission’s Horizon 2020 plan. In the Netherlands, the government’s Smart Industry initiative focuses on providing workers across the manufacturing sector with the technological skills they need to remain valued employees both now and in the future.

“There’s a very clear recognition that [this upskilling] is a shared responsibility between governments, employers and employees,” Miller said. “These workers don’t necessarily have to have a degree, they don’t necessarily have to be computer programmers, but they do require a new set of skills, and it’s about these three stakeholders coming together to try and understand how to deliver on that.” By collaborating to reskill these workers, a whole host of issues, from forced redundancies to having to pay out unemployment benefits, can be eliminated.

To remain competitive, companies must recognise that business models are not monolithic, and must be prepared to be as flexible as possible in the face of challenging market conditions. They must also identify that the source of revenue is changing, from being driven by manufacturing to now originating in the service economy. By understanding these shifts in the sector and taking steps to get in front of them, manufacturing firms can ensure they remain a valued part of the European business landscape in the years to come.