Women aren’t getting to the top. Why?

Modern attitudes to equality have made us more aware of the unfair difficulties women face at the highest levels of business, but the rate of change is still lagging 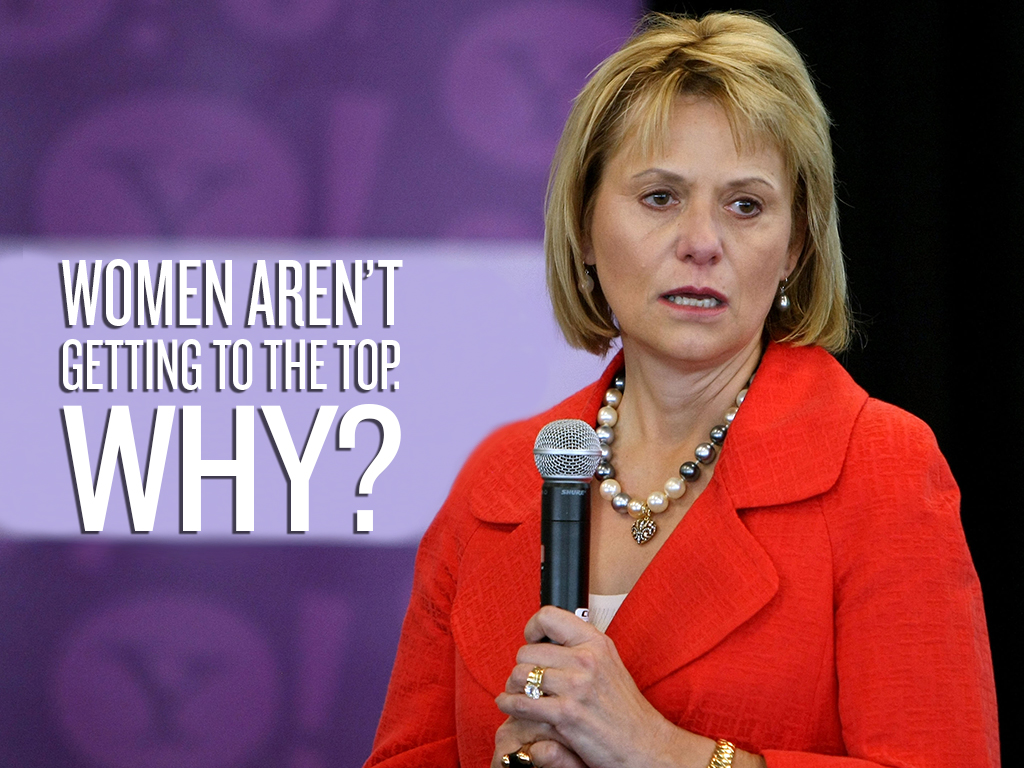 It’s been more than a century since the suffragette movement forced the world to pay attention to the voices of women and the cultural barriers blocking them. But fast-forward to the present day and gender inequality in the highest echelons of the workplace is still so glaringly apparent that one might reasonably question what real change has been made since.

Men continue to account for a staggering 94.8 percent of Fortune 500 company CEOs. Furthermore, the gender pay gap continues to pervade most careers, negatively impacting men as well as women by generating losses of around 20 percent in GDP in developed economies, according to Terrance Fitzsimmons, Post-Doctoral Research Fellow at the University of Queensland Business School.

Family responsibilities, outright discrimination and old boys’ networks are cited frequently enough. Relatively little attention, however, tends to be paid to the cultural factors preventing women reaching the very top and awaiting them on the rare occasions they do get there.

According to Fitzsimmons, out of 31 female CEOs interviewed in his study Navigating CEO appointments, all but one had suffered a “major trauma” before the age of 15. He says the crisis forced them to assume an adult role and fostered “tremendous resilience and self-confidence.”

Stating that only a traumatic event can spur on success seems extreme, and risks encouraging generalised assumptions about the backgrounds of the world’s top female CEOs. However, Fitzsimmons raises an interesting point; stereotypes continue to pervade society and they can potentially discourage women from having the levels of confidence, resilience and risk-taking needed by a leader in the limelight. “There’s something going on for boys in their childhood that gives them that self-confidence, and that’s not happening for most girls in their childhood” he says. “Things like being away from your parents, going out and adventuring, testing your limits.” With parents’ working patterns, the media, education and a history of patriarchy all working together to culturally imbue social norms for men and women into children growing up, it’s no surprise there’s a gender divide in the C-suite.

And those cultural factors influence the approaches a leader is likely to take. The research study Gender and Leadership Effectiveness found that, in line with the characteristics that tend to be encouraged in childhood, female leaders are often more modest. In terms of leadership, “men rate themselves as significantly more effective than women rate themselves” says Dr Sam Paustian-Underdahl, Professor of Management at Florida International University, who worked on the study. But, she says, women in senior management positions were actually rated by others as more effective than men – due to the transformational style that female leaders, according to a meta-analysis of 45 different studies, have a greater tendency to employ.

Double standards
The meta-analysis also found that women were more likely to take a participative and collaborative approach. According to Alice Eagly and Linda Carli in a 2007 study, this may be a way of avoiding typically masculine associations: “As women navigate their way through the double bind, they seek ways to project authority without relying on the autocratic behaviours that people find so jarring in women”, they wrote. Female leaders were more inclined to reward their employees (an aspect of transactional leadership), while men had a greater tendency to implement disciplinary or corrective measures, or to take a laissez-faire approach.

A host of studies suggest that, contrary to Paustian-Underdahl’s more optimistic conclusions, female leaders are often less favourably received than men. In a recent survey by Gallup, 33 percent of Americans said they would choose a male boss over a female one (while only 20 percent said the opposite). Various researchers have put this down to a double bind: “If women try to be collaborative and caring they’re seen as too soft” says Fitzsimmons. “But if they try to act more identically to men they’re seen as too hard.”

According to the report by Eagly and Carli, women are associated with communal traits such as affection and kindness, while men are more commonly linked with agentic characteristics such as assertion, control, aggression and ambition. The study found that agentic traits tend to be associated with the most effective leadership, a phenomenon summed up by Virginia Schein in her famous 1980s quote: “Think manager think male” and found to still prevail in her 2007 study Women in management: reflections and projections. “If you don’t fit the stereotype, people are less inclined to give you slack” says Fitzsimmons.

That certainly seems true of Zoe Cruz, who was fired just before making it as Wall Street’s first female CEO (at Morgan Stanley) in 2008. The criticism she faced throughout her career – dubbed ‘Cruz Missile’ and the ‘Wicked Witch’ – seems indicative of the reception that can greet alpha females (a term she used self-referentially). But it’s highly likely that the same traits which inspired such criticism were what got her to so high a position in the first place.

Catch 22
The issue of reconciling effective leadership with traditional notions of femininity was voiced by former Canadian Prime Minister Kim Campbell: “I don’t have a traditionally female way of speaking…I’m quite assertive” she said. “It was the right way for a leader to speak, but it wasn’t the right way for a woman to speak.” A female leader, therefore, has to choose between fulfilling feminine stereotypes – taking a potentially less effective approach – or assuming traditionally masculine traits and suffering the consequences.

Opting for the latter can mean sacrificing all softness for fear of scrutiny, according to a former colleague of Cruz. “It’s the pounding-each-other-on-the-back stuff that men do” she claimed. “Maybe it’s because a woman is seen as too soft and nurturing in a man’s world. Women aren’t encouraged to do that.” A study by Victoria Brescoll, entitled Women, Influence & Leadership, found that anger gave men a higher status than it did women, from trainee to CEO level. Furthermore, according to research by Rudman and Glick in 2001, women who promoted themselves were judged to be lacking social skills. With such cultural pressures in mind, it’s no wonder women, as found by Paustian-Underdahl, tend to be more modest and, therefore, less likely to reach C-suite roles.

Research has noted that female CEOs tend to come from outside organisations and industries, rather than working their way up in one company. 35 percent of female CEOs between 2004 and 2013 came from outside, against only 22 percent of male CEOs, according to the latest annual Chief Executive Study by consulting firm Strategy&. This could be down to the fact there are simply fewer opportunities for women. “The vast majority of men were always looking two steps ahead or had planned it all out…whereas for a lot of the females it was opportunistic” says Fitzsimmons. That could explain why, as pointed out in numerous research studies, women are more frequently put in ‘glass cliff’ positions. That is to say, they are thrown in opportunistically to turn around ailing businesses, when the chances of failure are extremely high.

Climb or fall
A number of female CEOs have clambered over the glass cliff and come out stronger than ever; Carly Fiorina dragged Hewlett-Packard up from the depths after her appointment in 1999, growing the business to unprecedented levels and overseeing a $20bn buyout of Compaq in the face of intense scepticism. IT supplier Xerox appointed Anne Mulcahy as its first female CEO on the back of an investigation by the SEC and debt amounting to $17bn; she turned the company around. Petroleum manufacturer Sunoco chose its first female CEO, Lynn Laverty Elsenhans, after a 52 percent drop in shares; the powerhouse likewise proved to be worth her salt, sending shares soaring back to their former glory.

But sometimes those risks don’t pay off. Carol Bartz, appointed as CEO at struggling Yahoo in 2009, amid plummeting share prices and other disasters, failed to turn around the ailing internet giant and was swiftly ousted. In October this year, US Secret Service director Julia Pierson, the first woman appointed to the role since its inception 150 years ago, resigned after intense criticism. Hauled in to save the day after a difficult few years, punctuated by lack of funding, staff and a dwindling reputation, the Secret Service’s first female director didn’t have the best of chances.

In January this year, Mary Barra was called in to become the first ever female CEO of General Motors, expected to breathe new life into the struggling, male-dominated car company – just before a recall on faulty ignition switches linked to 29 deaths was made. Despite promises to change GM’s culture and the dismissal of 15 individuals involved, Barra has suffered criticism for her handling of the crisis.

Entrenched discrimination
With glass cliff situations accounting for such a large number of female CEO appointments, it’s no wonder women don’t succeed as frequently as men; in the report by Strategy&, 38 percent of all female CEO departures resulted from being fired, while that accounted for only 27 percent of male departures.

What glass cliff appointments draw attention to is the fact that female CEOs tend to make it in the most exceptional of circumstances – Yahoo’s much-lauded Marissa Mayer made it as a leading exec at Google by joining the internet giant in its infancy; HP’s Meg Whitman became CEO of eBay when it had 30 employees. And a large part of that seems down to both the behaviours encouraged in men and women, and the negative perceptions that deviating from those behaviours entails.

When Norway made it the law for women to take up at least 40 percent of executive boards that goal was achieved, giving the appearance of near-equality. However, the proportion of female CEOs remained at 4 percent. “There was no cultural shift” says Fitzsimmons. “I think that tells you something about every country; that this is deeply entrenched.”

If predictions by Strategy&, based on a ten-year trend, are correct, women will account for around a third of all CEO appointments by 2040. However, this relies on a continuing cultural transformation that encourages women to aspire to traditionally male-dominated roles, to believe in the right to a place and to throw modesty into the flames without having to face the scrutiny a male equivalent might escape.

Only once those inner disparities are overcome can real equality in any professional field be fully established, and individual characteristics that distinguish one CEO from another be regarded simply as character differences, rather than intrinsic gender divisions.