BP Plc has named American Bob Dudley as its next CEO, saying Tony Hayward would stand down after his gaffe-prone handling of the worst oil spill in US history that triggered a $17bn quarterly loss. Dudley, the US executive managing BP’s response to the spill in the Gulf of Mexico, will get the top job […] 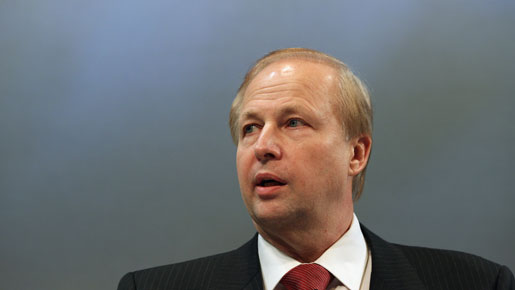 BP Plc has named American Bob Dudley as its next CEO, saying Tony
Hayward would stand down after his gaffe-prone handling of the worst oil
spill in US history that triggered a $17bn quarterly loss.

Dudley, the US executive managing BP’s response to the spill in the Gulf of
Mexico, will get the top job on October 1, a move that could soften US
criticism of the British oil major.

“I believe that it is not possible for the company to move on in the US with me remaining as the face to BP,” Hayward told reporters on a conference call. “So I think
that for the good of BP, and particularly for the good of BP in the
United States, it is right for me to… step down.”

BP said it planned to sell assets worth up to $30bn over the next 18 months and
would cut its net debt to between $10bn and $15bn in that period.

The company said it would consider its position on future dividend payments at the time of its fourth-quarter results.

Analysts had expected BP to set aside tens of billions of dollars to cover the
cost of the April 20 oil rig explosion that killed 11 people, ruined the
Gulf’s fishing and tourism industries, and polluted the Gulf shoreline
with slimy goo.

BP Chairman Carl-Henric Svanberg said the company
would take a “hard look” at itself in the aftermath of the spill:
“BP… will be a different company going forward”.

However, Dudley denied BP’s culture, which investors and analysts say encourages
greater risk taking than some rivals, contributed to the disaster in the
Gulf of Mexico.

Excluding a $32.2bn charge for the oil spill and
other non-operating costs, the replacement cost profit was $4.98bn, in
line with the average forecast from a poll of 11 analysts and up 77
percent on the same period of 2009.

Replacement cost profit strips out gains or losses related to change in the value of fuel
inventories and as such is comparable with net income under US
accounting rules.

“They’ve taken all the charges at once and we’re seeing the first way forward –
how they’re going to deal with the balance sheet – which is the key
thing … I think it’s the board trying to wipe the slate clean.”

“Not be missed”
BP
could begin the final procedure to kill its leaking well shortly, the
top US spill response official said. That will involve pumping mud and
cement through a relief well that has been drilled since May 2 to a spot
close to the bottom of the damaged well.

“The next thing that we
need to do is get this well in the position where we can make the
intercept and kill this well from the bottom,” retired Coast Guard
Admiral Thad Allen told reporters in Washington.

More than five million barrels of oil have spilled into the Gulf of Mexico since the
undersea leak began, according to US government estimates. Some Gulf
Coast residents, seething about damage from the spill and BP’s
compensation process, said they would be happy to see Hayward go.

“He will not be missed,” said Larry Hooper of Empire, Louisiana, who runs an offshore fishing charter business.

Hayward, a 53-year-old geologist, has described Dudley as BP’s “secretary of state” for his role overseeing the cleanup.

Dudley, who was raised in Mississippi, would be the first non-Briton to become
chief executive of BP. He was previously head of BP’s Russian joint
venture, TNK-BP, until he was forced to flee the country amid a spat
between BP and its partners.

Hayward will receive one year’s salary or £1.045m and be appointed a non-executive director at TNK-BP as part of his departure deal. He will also keep his pension pot of around £11m.

BP has lost 40 percent of its market value since the spill
that has hit about 39 percent of the coast stretching from Brownsville,
Texas, to the Florida Keys.

Analysts said Hayward’s exit was good for the stock because he had become an easy target for angry US lawmakers and Gulf residents. Hayward was pilloried in the US for
complaining he wanted his “life back” weeks after the deadly rig and start of the spill.

“It is customary that when
things don’t go right, you are going to chop heads and usually that
starts at the top,” said Steve Goldman, a market strategist with money
manager Weeden & Co in Greenwich, Connecticut.

Hayward may still not escape another round of testimony before the U.S. Congress. Senator Robert Menendez said he wants Hayward to testify on whether BP
influenced the release of the convicted Lockerbie bomber to aid the
firm’s business interests.

“Tony Hayward, regardless of his
status whether he is going to be the CEO tomorrow or not, we believe
that he was in the midst of the negotiations with the Libyans as it
related to this oil deal,” Menendez, a Democrat, said in New York.

Hayward
is the third of the last four BP chief executives forced into an early
exit. John Browne left after lying in court papers about a gay love
affair and Bob Horton was pushed out over strategic disagreements in
1992.