The COVID-19 pandemic has highlighted the ideological division between Northern and Southern Europe. Without greater collaboration, the eurozone may not survive the crisis 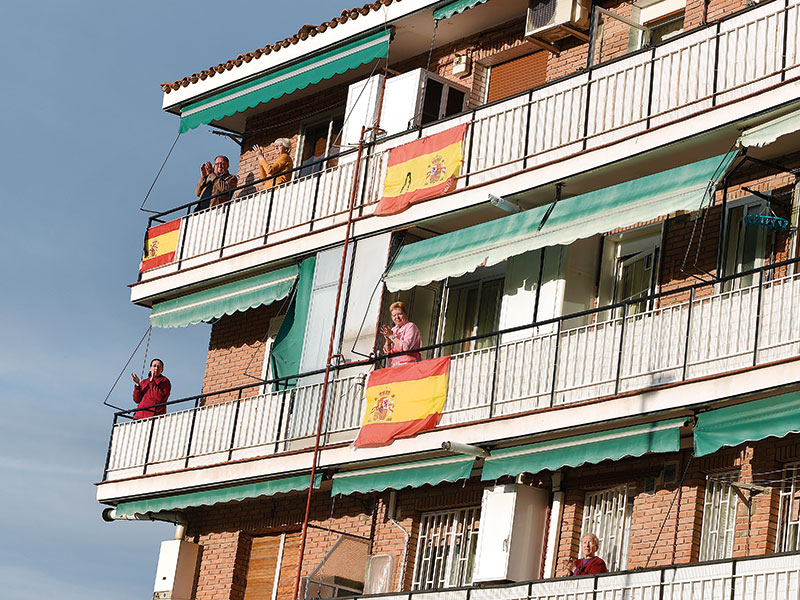 Stronger together: neighbours in Madrid, Spain, applaud healthcare workers from their balconies as the COVID-19 pandemic rages on
Featured

The EU and the eurozone are approaching their second defining moment in a decade. The first was the debt crisis that started in 2010 and was quelled by European Central Bank (ECB) President Mario Draghi’s July 2012 pledge that the ECB was ready to do “whatever it takes” to preserve the euro. The ECB backed up Draghi’s declaration by introducing the Outright Monetary Transactions (OMT) scheme, an emergency sovereign-bond-purchasing programme that fortunately never had to be used.

The EU then established a banking union, with the ECB assuming the role of bank supervisor and a common resolution mechanism dealing with failing institutions. But this union is still incomplete because the resolution backstop is insufficient for a major crisis and there is no common deposit-insurance scheme.

As a monetary union that lacks a fiscal union to share risks, the eurozone is unstable

More generally, as a monetary union that lacks a fiscal union to share risks, the eurozone is an unstable creature. And COVID-19 represents a major shock that calls for huge expenditures – not only on healthcare, but also to keep the European economy on life support while lockdowns and social distancing measures are in effect.

A union divided
Only the public sector can cope with such a challenge. Unfortunately, however, the EU is once again divided between fiscally strong northern member states (led by Germany and the Netherlands, which have debt-to-GDP ratios of around 60 percent) and fiscally weak countries where this ratio is close to or above 100 percent. Indeed, nine EU countries – led by France, Italy and Spain – have proposed mutualised ‘coronabonds’ to help mitigate the pandemic’s economic impact. Portugal, Ireland, Luxembourg, Slovenia, Belgium and Greece also support the idea.

But the fiscally strong member states, fearing moral hazard, oppose debt mutualisation. Although a symmetric macroeconomic shock like the one the eurozone is currently experiencing weakens the moral hazard argument, northern countries’ fear is not without merit. After all, most of the countries supporting coronabonds have failed to put their fiscal house in order since the euro debt crisis ended.

Moreover, there are several practical problems with coronabonds, not least the need for guarantees or direct transfers from national budgets, owing to the absence of any European revenues to back such instruments. Germany insists that established EU rescue funds such as the European Stability Mechanism (ESM) be used first. As far as the frugal member states are concerned, now is not the time to establish a eurozone safe asset.

Finding a cure
Nonetheless, an EU programme to combat COVID-19 would also help the bloc’s northern members to control the pandemic and limit the damage to their economies. Without such a scheme, countries like Italy or Spain would be bound to spend too little on tackling the public health emergency and promoting economic recovery, implying negative effects on public health and economic performance not only in those countries, but also in Northern Europe.

There are several practical problems with coronabonds, not least the need for guarantees from national budgets

Since the European Council’s inconclusive March 26 virtual summit, there has been a range of EU initiatives, including the relaxation of state-aid rules to help troubled firms and, most recently, a €540bn spending package to support member states’ economies. The package, proposed by Eurogroup President Mário Centeno, includes up to €240bn in credit from the ESM, up to €200bn in loans for small and medium-sized enterprises from the European Investment Bank, and a €100bn loan plan for unemployment benefits from the European Commission.

Although applying to the ESM is a precondition for the ECB to intervene with the OMT scheme, it carries a stigma and usually comes with conditions. Financing for COVID-19-related expenses, by contrast, will come with no strings attached, though other economic support would carry conditions. Furthermore, EU finance ministers have agreed to establish a temporary recovery fund, which may be financed by “innovative financial instruments”. The battle for partial debt mutualisation, pushed by France, has been postponed.

Although these measures go in the right direction – indeed, they have saved the day – the question is whether they will be enough. If not, then the eurozone – and the EU as a whole – will have failed to act decisively on a common problem, and the split between blocs of member states will persist and possibly deepen.

Above and beyond
One could argue that the ECB can fix any problem regarding fiscally weak countries’ sovereign debt by again pledging to do whatever it takes. But Draghi was lucky in that the OMT was never invoked, and it is unclear whether those magic words will work this time.

Indeed, if the crisis persists and the public debt of Italy and Spain increases substantially (to, say, 160 percent and 130 percent of GDP respectively), then the markets may test the ECB’s resolve to keep buying these countries’ sovereign debt. The ECB may, therefore, have to go far beyond its benchmark capital allocation among countries when implementing its recently announced €750bn asset-purchase programme (which remains smaller than Italy and Spain’s estimated debt for 2020). True, the ECB’s action will buy time and give affected countries more fiscal leeway, but, as in the debt crisis, the ECB will remain exposed as long as the eurozone lacks a common fiscal policy.

Once again, the eurozone has responded with more integration only when on the brink of disaster. Let us hope that we are also lucky this time, and that no accident materialises to call the euro’s future into question while Europe muddles through the crisis.