Urban planners are putting Minsk on the map 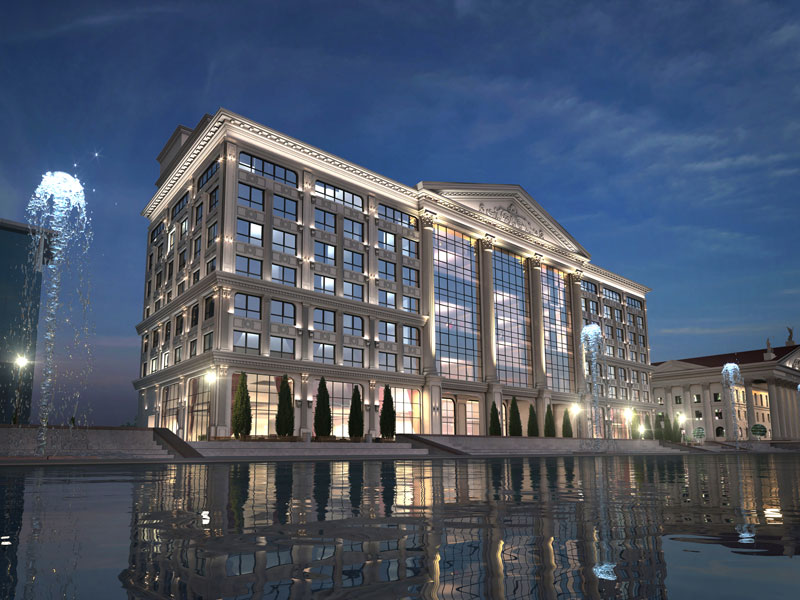 Multifunctional complexes, which act as a ‘city within a city’, are increasingly popular in today’s urban centres. The main reason for this is that time is now one of the most valuable – and hard to come by – commodities of the 21st century. Due to the sheer size of modern cities, the commute between home, work and other destinations has become a major enemy to what we consider a high quality of life. The city within a city concept encourages real estate developers to design urban projects that provide the end user with everything they need, right on their doorstep. This allows city dwellers to fight the time drain of commuting and improve their work-life balance.

One company that understands just how important it is for urban planners to develop projects with the residents’ quality of life in mind is Dana Holdings. Our group represents a collection of leading companies in investment and real estate construction, and we have made it our mission to develop sites in areas of Eastern Europe that have huge potential for growth. Some of our development projects in Russia, for example, include the head office of the Central Bank of Russia, the Efimiya business centre in Moscow and the Institute for Finance and Economics in Yakutsk.

It is our ambition that the new international financial centre will not only complement Minsk’s current economic environment, but will also improve its prospects

Laying foundations
At Dana Holdings, we applied the city within a city formula when developing Minsk World. Situated in Belarus’ capital, the multifunctional complex occupies an advantageous position in the heart of Eastern Europe. The country’s accessibility and diverse investment options – from agriculture to technology – make it an attractive location for businesses and prospective residents alike.

With an area spanning three million square metres, Minsk World is one of our largest and most ambitious construction schemes to date and our biggest single development project in Europe. In fact, in 2018, EuropaProperty named the project the largest multifunctional complex in the centre of a city in Europe. It is no coincidence that it is being compared to Dubai and Abu Dhabi, the leaders of modern urbanism. The project will include an international financial centre, as well as residential areas, shopping malls, entertainment centres, schools, kindergartens, hospitals and hotels. The site will have no shortage of green space, either; nestled within Minsk World will be a number of parks and gardens to give a true sense that the complex is a city within a city.

The residential and business complex aims to provide its residents and visitors with an extraordinary level of comfort and an excellent quality of life. We see the high-spec development as part of a bright and optimistic future for Belarus. In line with this vision, it was important to place the needs of residents at the heart of the complex.

Minsk World consists of 24 residential quarters, all closely connected to the many amenities held within the development, including social, cultural and educational facilities. Residents will find it easy to get around thanks to the new metro line, and will also be able to explore the centre from its modern boulevards, public walkways and cycling tracks, which will run alongside the main residential areas. Minsk World is designed to offer plenty of recreational space for residents and visitors, with a park at the centre of the complex connecting the rest of the city by a system of pedestrian zones and vast green areas.

Enticing investors
From an investor’s perspective, one of the most exciting aspects of Minsk World is the inclusion of the international financial centre. The centre will offer preferential tax treatment, a minimum tax rate on income and profits, special legal status, express registration within 48 hours and 100 percent foreign ownership. Additionally, investors stand to benefit from Minsk’s transparent business environment and independent court system.

It is our ambition that the new international financial centre will not only complement Minsk’s current economic environment, but will also improve its prospects. In fact, the development is strategically important for the advancement of Belarus as a whole: it will contribute to the modernisation and diversification of the national economy, spur job creation, encourage GDP growth and facilitate regional and international business integration.

We want the complex to stand proudly alongside the likes of Dubai, London, New York, Singapore and Hong Kong. To this end, Dana Holdings has been working closely with advisors to ensure Minsk’s international financial centre possesses the same characteristics as other successful centres around the world. These include the financial hubs of Dubai, Singapore and London’s Canary Wharf, which is a world-famous example of a regeneration project that closely aligns with Minsk World’s targets.

In October 2018, Dana Holdings took the first step towards creating the Minsk international financial centre by signing a memorandum of understanding with DIFC Investments, the holding company behind the international financial centre in Dubai. This marked the beginning of an exciting journey for the project. In the early stages of its development, we predict that those interested in the centre’s services will be predominantly investors from the Commonwealth of Independent States, which comprises nine former Soviet republics. This is due to the accessibility of the Belarusian market and the absence of language barriers for these countries. As time goes on, though, we expect the centre will begin to attract a wide pool of investors from across the Eurasian Economic Union, the EU and the US.

Fuelling growth
At Dana Holdings, we pride ourselves on creating business hubs that boost economic development in their local regions. In October 2018, we began the construction of Tesla Park, a new multifunctional complex in Kazakhstan’s capital, Nur-Sultan, which was renamed from Astana in 2019. With Nur-Sultan’s population expected to double to two million over the next 10 years, the city is poised to see tremendous growth. To capitalise on this growth, Nur-Sultan needs cutting-edge facilities and contemporary designs that will attract a young and talented workforce. We believe Tesla Park will play a critical role in achieving this. Spanning 1.5 million square metres, it will provide residents and businesses with everything from schools to recreational spaces and sports centres.

In the same way, we believe the Minsk World project has all the critical components needed to bring about the next stage of Belarus’ evolution. Now is an opportune moment for the country to pursue economic growth. Since becoming an independent state, Belarus has enjoyed a stable political system, while its thriving capital benefits from high-quality infrastructure, a culture of tolerance and an excellent education system. All of these factors provide Minsk with a robust foundation upon which to build a world-class financial centre.

Minsk World will also allow Belarus to strengthen its role as a bridge between Europe and the dynamic economies of Russia, Eastern Europe and Asia. The complex will act as a catalyst for the sustainable development of the capital as well as the Belarusian, Russian and Eurasian Economic Union economies. The new international financial centre will prove instrumental in this respect as it will enjoy a special system of benefits designed to attract capital and provide financial services. We believe that, thanks to these incentives, Belarus can become the most competitive and attractive country for investment on the continent.