Ireland will transfer the first loans to the National Asset Management Agency (NAMA) “bad bank” by the end of March, missing its latest deadline of late February, as it waits on European approval to begin the scheme. Finance Minister Brian Lenihan has said work valuing the total loans initially worth 80 billion euros ($109bn) was […] 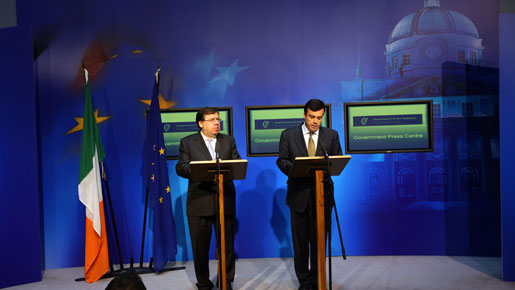 Ireland will transfer the first loans to the National Asset Management Agency (NAMA) “bad bank” by the end of March, missing its latest deadline of late February, as it waits on European approval to begin the scheme.

The transfer of loans to NAMA which the government estimates it will pay 54 billion euros for was originally meant to start in December and the head of the country’s debt agency had said earlier this month that it would make its February target.

“It will take until the end of March but it is very important we get the valuations right. We also have to get our EU approvals and they are going very well,” Lenihan told Ireland’s Newstalk radio station.

The write-downs caused by asset transfers to NAMA will require banks to raise additional capital and the central bank said recently that the government would have to provide more capital to them as a result.

Ireland was forced to take nearly 16 percent ownership of Bank of Ireland this week – its first direct stake, in lieu of a payment due on the 25 percent indirect stake it took last year.

The bank said recently that it would transfer nearly 200 million ordinary shares in lieu of a due 250 million euro payment that could not be repaid until a European Commission verdict on its restructuring plans for state aid.

The Commission had told Bank Of Ireland and rival Allied Irish Banks, which the government also holds a 25 percent indirect stake in, to stop paying dividends on shares and interest on some debt pending the restructuring decision.

Lenihan said he expected that verdict in a matter of weeks, adding that it was possible the taxpayer would have to inject further capital into the banks but restated his preference that the lenders meet their capital needs privately.

“I believe there is scope for asset disposals within the banks themselves. There is also scope for the realisation of other assets they have overseas,” Lenihan earlier told national broadcaster RTE.

Allied Irish’s first payment is due in May and Lenihan said there would be a “far clearer picture” regarding its restructuring plan by then.