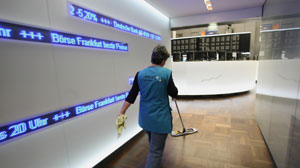 In preparation for the implementation of new clearinghouse rules, the European Association of Central Counterparty Clearing Houses, or EACH, has named Marcus Zickwolff as its new chairman. Currently head of system clearing design at Eurex Clearing, which is owned by Deutsche Börse, Zickwolff will take the reins of EACH at a critical time in its history.

The new rules, which are set to be phased soon, will require many over-the-counter derivatives trades to occur through clearing houses such as Eurex, the NASDAQ OMX, and the CME Clearing Europe. New legal and reporting requirements will also be put in place, making these trades much more transparent than in the past, and also requiring new risk management systems. The new requirements for the clearing houses will be drawn up on a global scale by the International Organisation of Securities Commissioners, and will apply to all clearing houses, regardless of country. Because one oversight organisation will be in charge of multiple clearing houses, one of  Zickwolff’s first charges will be to build relationships with the other clearing house heads so that together they can negotiate for their interests as a unified group.

The online news site Risk.net reports that Zickwolff’s term will run for two years, until February of 2014. Interviewed shortly after his appointment was announced, Zickwolff said: “EACH will continue to contribute to the integrity and the stability of the global financial system.  Therefore it will closely work together with public authorities as well as the financial industry to achieve safe and efficient financial markets by consistent regulation.”  This will be key, as regulators are jittery about any organisation or group that appears to be nearing a “too big to fail” status – one of the reasons the Duetsche Börse and New York Stock Exchange merger deal was shot down earlier this year by regulators.

By some estimates, nearly 90% of all global derivatives trading is done in the OTC market, which up to this point has been largely unregulated.  The creation of the non-profit CCP12 in 2001 provided best practices guidelines, aided in development of global standards, and worked with regulators, but did not institute any new regulations.  However, after the 2008-2010 market events, governments and financial oversight committees no longer found best practices to be good enough, and movements formed in several localities for increased oversight.  A clearing house model is the most-often cited method for allowing trade to continue relatively unimpeded, yet still have processes in place to stop market slides like have been seen in the past few years.

In a recent article, Zickwolff described the relative strength of exchange-traded and centrally cleared derivative markets versus the over-the-counter markets. He says that a clearing house, acting as a central counterparty (CCP), can buffer the effect of the financial instability of one organisation by not allowing its weakness to spread.  The mitigation of these risks is one of the main reasons for the new regulations, and Zickwolff’s long history in the financial industry makes him a strong choice to bring these derivative markets into the modern world and improve services for clients.