A pilot shortage could inhibit the private aviation industry’s ascent

The private aviation industry continues to scale new heights, attracting customers with cutting-edge features. But a pilot shortage threatens the growth of this high-end sector 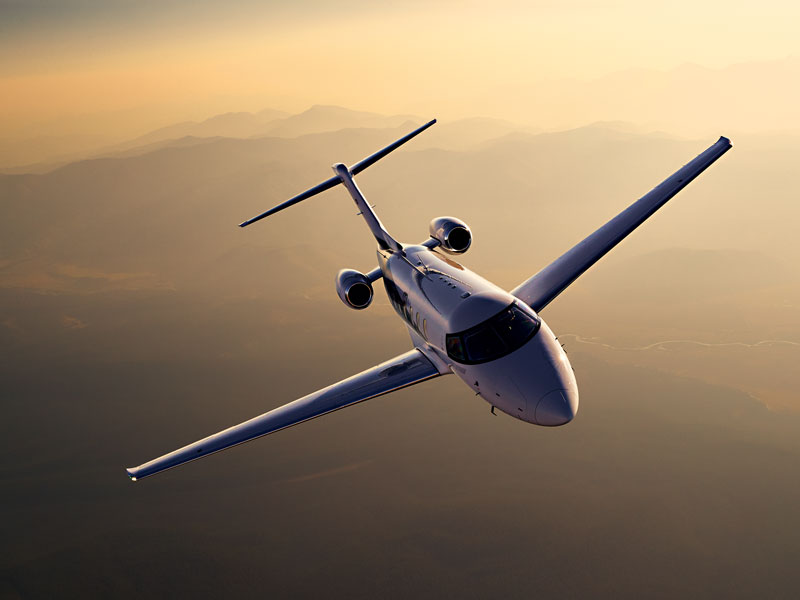 The aviation industry will need to find an additional 98,000 pilots by 2038 to cope with the growing demand for air travel
Lifestyle

Although travel may be more popular than ever, flying can be an altogether unpleasant experience. The stress of going through security, the inevitable delays (or cancellations) and the depressing in-flight meal make it something to be endured, rather than enjoyed.

But flying doesn’t have to be like this, and for some, it isn’t. Increasingly, those with the financial means to do so are taking to the skies surrounded by a little more luxury. According to
Honeywell Aerospace, multinational firms and wealthy individuals will purchase nearly 8,000 new private jets over the next decade, adding to the 4,600 or so that already frequent the skies.

This growth is being driven by technological innovation, with the recent launch of several new aircraft models pushing demand to new heights. But even with orders flying in, there may be trouble ahead for the private jet market. As aviators opt to fly for commercial airliners – where salaries can be higher and work is often more dependable – instead of private employers, pilot shortages are expected to hit the industry.

Earning your wings
Anyone who has flown economy class can see the appeal of travelling by private jet. First, it significantly cuts down dead time. Due to fears of missing a flight, many individuals flying with commercial airlines arrive at the airport extraordinarily early. Private customers, meanwhile, can enjoy a far more streamlined process. According to Surf Air, a private air travel club based in California, customers can arrive just 15 minutes before take-off when travelling aboard its aircraft. As a result, Surf Air members save an average of two hours per flight. In addition, when flying privately, individuals are in charge of the scheduling – it’s simply a case of picking a date and time that suits them best. Privacy, safety and comfort also receive a boost.

Some private jet operators are ramping up the convenience of their services to stand out in an increasingly competitive market. Many have embraced digital technology to allow clients to schedule trips using their smartphones, and some operate a business model where customers pay a flat rate in exchange for almost unlimited usage. “Surf Air boasts a first-of-its-kind air travel solution,” Hudson Andrews, the company’s director of marketing, told European CEO. “What sets us apart most is our ‘all-you-can-fly’ membership model. For one monthly subscription fee, members can fly as often as they’d like on our scheduled service. Booking a flight in seconds from an easy-to-use mobile app helps to make the service all the more convenient.”

Although private jet deliveries remain below the levels seen prior to the 2008 financial crisis, the market is still buoyant, particularly for those companies that have continued to deliver innovative products. Rob Scholl, Senior Vice President of Sales and Marketing at Textron Aviation, told Bloomberg that his company had prospered over the past few years because it almost always had “something new to be talking to customers about”. Many other private aviation firms are looking at novel ways of capturing additional clients.

A cut above the rest
Another firm that stands out from its competitors is Swiss aircraft manufacturer Pilatus. The company, which was founded in 1939 to carry out maintenance work for the Swiss Air Force, has a long history of breaking new ground.

In the 1950s, its PC-6 craft used tailwheels to provide extra clearance from the ground when most planes were only using nosewheels – the craft remained in production until earlier in 2019.

The firm’s latest release, the PC-24, is also doing things differently. Described by Pilatus as the world’s first “super-versatile jet”, the PC-24 has a maximum cruising speed of 815km/h, a range of 3,845km and can carry 11 passengers. What really makes the PC-24 stand out, though, is the number of landing options available to its passengers.

There are approximately 10,650 airports available to aircraft that require runways of at least 3,130ft for take-off and landing. When a runway of just 2,930ft is needed, an additional 880 airports come into play. However, the PC-24 is also designed to land on unpaved airstrips, which, according to Pilatus, doubles its landing options worldwide.

“We are very pleased with how the PC-24 is performing for our customers, and demand remains very high,” Thomas Bosshard, CEO of Pilatus Business Aircraft, said in a press release. “The super-versatile jet was designed to provide tremendous flexibility, a quality which delivers added value to the light and midsize jet market. The feedback from our customers confirms that the PC-24 hits a sweet spot of capability that no other business jet can match.”

The flexibility offered by the PC-24 continues when customers explore the craft’s cargo options. The plane comes with a 1.3m by 1.25m cargo door and an electrical lift system to accommodate even the most sizeable luggage requirements. It is this attention to detail and ability to offer passengers a level of service rarely seen in other aircraft that has made Pilatus a favourite with many companies, including Surf Air.

“Pilatus is an incredible company from top to bottom,” Andrews said. “First, their safety rating is outstanding. It’s also a pilot favourite aircraft. The Pilatus works perfectly with our core business principles of fostering a convenient service while catering to a tightly knit community of frequent flyers. Coupling all of this with the Pilatus’ fuel efficiency makes it an ideal aircraft to carry out the missions we need it for.”

The private jet industry has seen significant development over the past five to 10 years through the introduction of new aircraft and alternative business models. Aside from Pilatus, France’s Dassault Aviation, Canada’s Bombardier and many others are continually updating and improving their jets to secure new customers.

You’re grounded
But while private jets are more sophisticated and feature-rich than ever, they may soon be confined to the ground. According to research by jet resale business Colibri Aircraft, the aviation industry will need to find an additional 98,000 pilots by 2038 to cope with the growing demand for air travel. The private jet market will be hit the hardest if those extra numbers can’t be found. Pilots for commercial airlines can enjoy higher salaries – a symptom of the fact they are ferrying a far higher number of customers around – and more stable working hours. Conversely, private pilots are subject to the whims of the jet owner and can unexpectedly find themselves unemployed should the jet be sold.

“The business aviation sector is struggling to compete with airlines in recruiting pilots,” Colibri Managing Director Oliver Stone told The Independent. “This means commercial airlines are not only recruiting existing business-aviation pilots, but they are also getting the pick of newly qualified pilots.” Private carriers may need to work more closely with commercial airlines to ensure that enough talent is nurtured and encouraged to take on private jobs. Aircraft manufacturers also have a role to play; constructing planes that are easier to operate will ensure a lower workload and may prove more attractive when recruiting new members of staff.

At Pilatus, for example, all aircraft are single-pilot models. Although many can be flown by two pilots, the cockpit of each plane is designed to be single-pilot-certified. The PC-24 comes with so many support features that the craft is accessible to non-professional, qualified pilots.

Of course, creating planes that require smaller crews is one way of addressing pilot shortages, but it will not be enough on its own. Initiatives to train and recruit more pilots – including attempts to attract more female pilots – are underway, but they should have been enacted long ago. Becoming a professional pilot can take years; the private jet market will be hoping this delay doesn’t result in planes being stuck on the runway.

The high life
Pilot shortages are not the only issue threatening the private aviation sphere. In Europe, the Swedish concept of flygskam, or flight shame, is drawing attention to the environmental damage caused by air travel. Although much ire has been directed at commercial airlines, users of private planes are often some of the largest carbon emitters. A report by Honeywell Aerospace found that private jets produce 40 times as much carbon dioxide emissions per person than a commercial flight.

“It’s hard to tell if the environmental movement has had a true impact, as air travel continues to grow from a usage perspective,” Andrews said. “However, it’s an important issue that deserves discussion. The Pilatus PC-12 is incredibly fuel-efficient, so at least we’re ahead of the curve on that front. Electric aircraft will also be an important piece of this equation in the coming five to 10 years.”

There is contrasting information regarding the environmental impact of private air travel. Plus, individuals who fly private often deliver huge economic benefits to the places they visit. Forbes contributor Doug Gollan suggests that each private jet arrival injects over $85,000 (€76,730) into the local economy. Similarly, many philanthropists offer their private planes at times of crisis; on average, business aircraft make 15,000 flights each year for humanitarian reasons.

Undoubtedly, though, the current image of flying is more negative than positive. What’s more, when travel takes place in the luxurious surrounds of a private aircraft, it is a lot easier to point the finger of blame. If the anti-flying movement intensifies, it’s likely there will be a knock-on effect on the private market. Falling demand could result in more intense competition between industry players and, ultimately, consolidation, with larger operators buying out their smaller rivals.

While the private aviation industry faces much change, there are still reasons to be optimistic. The two main market segments – the US and Europe – remain strong, and emerging economies in Asia and South America represent attractive prospects. In addition, a 2018 report published by PrivateFly and WINGX Advance found that the average age of business aircraft users was falling, suggesting a healthy future for the industry.

In some respects, a pilot shortage is a good problem to have; it reflects the fact that demand, whether via private jet or commercial airline, is rising. Electric aeroplanes and even autonomous aircraft may shake up the market in the coming decades, but such developments will not be ready for deployment any time soon. In the meantime, private jet manufacturers should strive for higher levels of utility, comfort and service. That way, even as the market continues to shift, they will be able to adapt and meet customers’ demands.