Earlier this year, 11 climbers died in just 16 days while attempting to reach the summit of Everest. Their deaths have sparked concerns about the lack of regulation in the mountain region’s adventure tourism industry 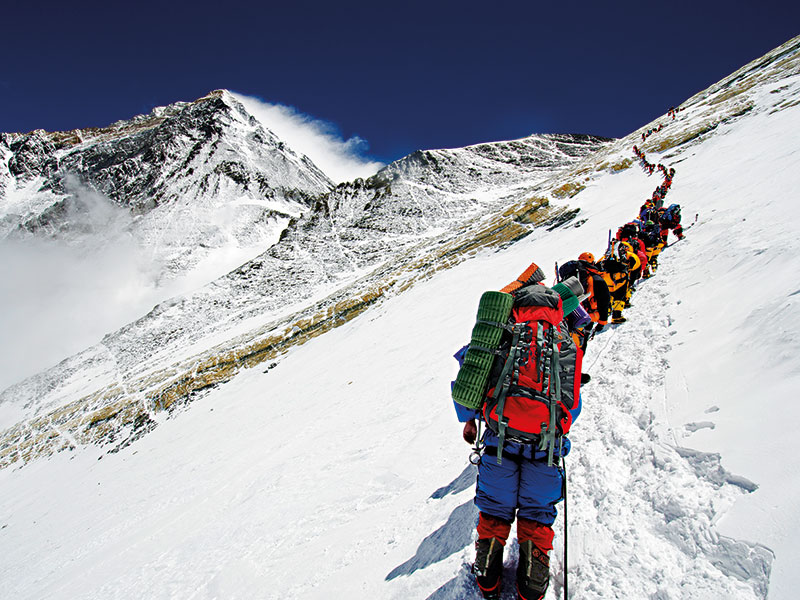 Queuing for hours on an ice-covered ridge in temperatures well below zero with a limited supply of oxygen. Stepping over dead bodies and human waste on the way up. Climbing down to base camp, exhausted, only to find that those who had been unsuccessful in their summit bid were attempting to obtain certification regardless through the magic of Photoshop.

This was the reality that greeted mountaineers attempting to summit Mount Everest during the 2019 climbing season. Nick Hollis, director of training and expeditions firm Fitways Adventures, explained: “Traditionally, climbing Everest has been the pinnacle of mountaineering – mountaineers would learn their trade and spend many years honing their skills before attempting it. In very recent years, things have changed. We now have people: a) believing they can; and b) putting themselves forward without much climbing experience. And this is where it’s going horribly wrong.”

Leave it to the professionals
Scaling peaks such as Everest was once the preserve of professional mountaineers like Sir Edmund Hillary, who dedicated their lives to this extremely dangerous and costly pursuit. These explorers were acutely aware of the need for extensive training, the minuscule margin for error high on the mountain, and the possibility that they would never come back down again.

Now, the appearance of Everest expeditions in commercial tourism brochures has redefined perceptions of this grave endeavour. It’s increasingly viewed as the ultimate adventure, with bragging rights to match. “The whole way through [the climb], there’s people taking selfie after selfie,” Hollis told European CEO. “It’s the ultimate Instagram photo, isn’t it? ‘View from the summit of Everest.’” As a result, the expedition has become trivialised, with many participants signing up with little understanding of its physical and mental toll. This attitude, combined with a lack of tour operator regulation and excessive granting of permits, brought about the perilous situation on the mountain that ultimately cost 11 people their lives.

Open to all
One of the greatest contributing factors to this trend is that it is easier than ever to access Everest. There are two climbing routes up the mountain: the north side, located in Chinese-controlled Tibet, and the south side, which is situated in Nepal. The Chinese authorities maintain stricter control over the north side, partly because the route is more technically challenging and partly because travel in Tibet is so restricted, but there are few logistical or bureaucratic barriers to accessing the south side.

Anyone seeking to climb this route must obtain a permit from the Nepalese Government, which costs $11,000 (€9,795). There is no limit to how many permits can be granted, and the government is unwilling to impose one, not least because Everest permits are a key source of tourism revenue. This means the number granted has been rising steadily for some years. In 2019, 381 permits were issued, the highest number in history, according to the Nepalese Government. “All you need to provide to get the permit is a short letter from your doctor saying that you’re physically and mentally fit to climb Everest. Then you pay your money and that’s where the control stops,” said Hollis. There are no assessments of climbing capability, nor any checks that a climber has the correct equipment (and knows how to use it). “It’s horrendous,” Hollis added.

This blasé attitude to regulating Everest is exacerbated by the increasing number of entirely unregulated tour companies, which do not assess climbers before accepting them onto expeditions. This is a particular issue with local operators; Hollis noted that western firms tend to only take climbers that have experience in ascending a similar peak. These tour operators charge up to $60,000 (€53,400) per climber, meaning Nepalese businesses can undercut them by 50 percent and generate what is still a significant income in the region. By prioritising operator revenue over climber expertise, these regional firms put not only the climbers, but also their Sherpa guides at serious risk. Ill-prepared climbers will inevitably need far more assistance, in anything from using their equipment properly to maintaining their oxygen regulation. This isn’t such an issue down at base camp, but it poses a significant threat at higher altitudes, where oxygen availability in the atmosphere drops to just 20 percent.

It becomes particularly problematic when climbers are determined to reach the summit, no matter what. “We saw a number of climbers this season that should not have been pushing up to the summit – they were absolutely exhausted,” said Hollis. “But they were just pointing at the summit and saying, ‘Must go to the summit.’ Of those, a number died. What they did by taking that insane attitude is they killed themselves, and they put their Sherpa at huge risk, because that Sherpa would have felt an obligation to stay with them well after their own oxygen had run out.”

Caution to the wind
Aside from risking the lives of their guides, these inexperienced climbers also create the queues that were seen on Everest this year. To reach the summit of the mountain, climbers must complete an 850m vertical ascent from the South Col camp, which will take even the most physically fit individual around eight hours. “Some of the more inexperienced mountaineers, they’re taking 12, 13, 14 hours to [reach] the summit,” said Hollis. During that time, they’re burning through oxygen, likely at a higher flow rate than a more experienced climber, and they’re creating bottlenecks, as there’s a single rope that goes up the summit and no overtaking. “[For] people waiting in queues, their own safety margins are massively reduced,” Hollis added.

This issue was compounded by the fact that the ‘weather window’ for climbing Everest was shorter than usual this year. May is the only month that the mountain falls out of the jet stream, meaning the top is not being buffeted by 200mph winds. However, climbers must also wait for a sustained period of days where there is little to no precipitation, as climbing in heavy snow is impossible. This period typically lasts around 10 days, but this year, it lasted just three, meaning the vast majority of the 381 permit-holders, plus the equivalent number of guides, were all attempting to reach the summit in that time.

“Everest is serious – it’s not a game up there,” Hollis told European CEO. “But when people are coming in from an adventure tourism approach, as opposed to a mountaineering approach, their risk, both to themselves and others, is hugely increased.” Climbing Everest is unlike any other sort of physical challenge, such as running a marathon, where the competitor can push their body to the absolute limit and know there will be a first-aid team on standby and a car to pick them up at the end.

Failing on Everest can mean losing your life, and climbing it should be approached with an attitude that recognises the gravity of the endeavour. “We have a saying in mountaineering,” Hollis said. “The three rules… stay alive, stay friends and then summit, in that order. What we’re seeing on Everest is a complete reversal of that.”