Ecotourism might be on the up, but people still want access to modern comforts when on holiday. Luxury camping is filling this space, offering high-end services in the heart of the countryside 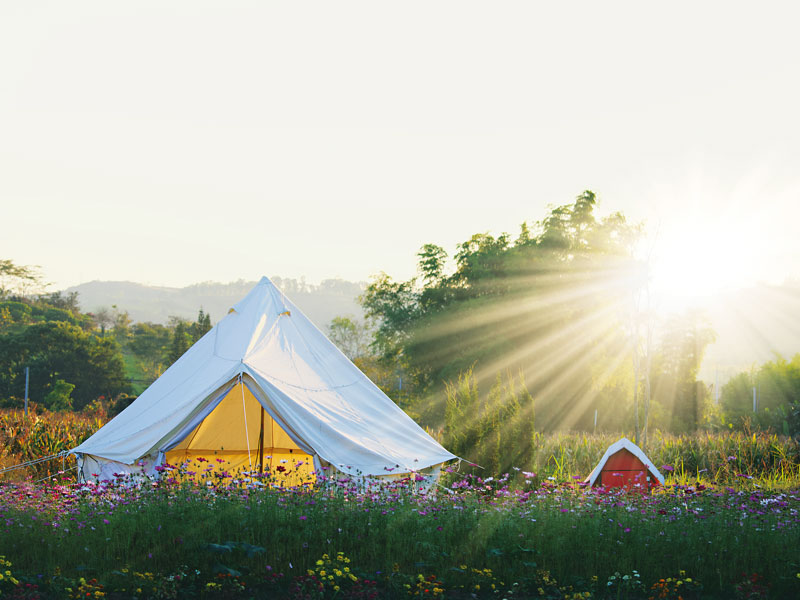 Home to roughly 8,000 campsites, France has more than any other country in the world apart from the US. As such, France has become a leader in developing new trends for campers across the world
Lifestyle

In summer 2019, France’s federation of open-air accommodation issued a warning to campsite owners around the country: glam up or go bust. Luxury camping, or ‘glamping’, is currently enjoying a meteoric rise in France. The Fédération Nationale de l’Hôtellerie de Plein Air found that more than 1,000 traditional campsites had shut down over the past 20 years and the rate was increasing year-on-year, with roughly 80 expected to close by the end of 2019.

According to the federation’s chairman, Nicholas Dayot, one and two-star campsites are suffering most. He noted that of the 4,000 campsites in financial difficulty, virtually all of them were in the one or two-star category. To ensure their survival, Dayot advised that low-star campsites take inspiration from luxury campsites.

Home to roughly 8,000 campsites, France has more than any other country in the world apart from the US. As such, France has become a leader in developing new trends for campers across the world. Since 2010, France has seen the creation of 520 five-star campsites and 1,171 registered four-star sites. These ‘glampsites’ now make up 60 percent of France’s camping market, and demand continues to grow: campsite guests across France stayed for 125 million nights in 2018, and camping reservations grew by 34 percent on lastminute.com.

Prices range from €50 to €400 a night, but what all glamping sites share is a level of comfort that standard camping lacks

This trend is reflected elsewhere on the continent. Europe holds the largest share of the global glamping market, which is expected to be worth $4.8bn (€4.3bn) by 2025, according to a study by Grand View Research. Such has been the decline in interest in traditional camping that some camping organisers have stopped offering it to campers all together.

Conversely, interest in European glamping trips has been steadily rising for the past five years. At Hen Heaven, a glamping organiser for hen parties, the number of European glamping trips has increased for four years in a row. “Demand for glamping increased in 2018 by 74 percent compared to the year before,” said Tom Bourlet, Marketing Consultant at Hen Heaven. “Although growth was more subtle [in 2019], it shows a continuous trend towards glamping and luxurious accommodation when staying outside.”

Bourlet explained that while France is a popular destination for glamping, the cost, which can be twice as much as in other European countries, often drives consumers away. “What we found was a huge number of enquiries came in for France, but it had an exceptionally low booking conversion rate.” Instead, cities in central Europe are hoovering up the demand. Budapest and Prague saw a 23 and 17 percent rise in demand respectively in 2019. “Budapest has had a strong connection with health, the outdoors and recovery trips,” said Bourlet. “Therefore glamping has proved a perfect match.”

Into the wild
There are several causes of glamping’s rising popularity. For one, it can take many different forms. At one end of the spectrum, there are sites with beds, electricity, en suite bathrooms and showers. At the other are glampsites replete with all the amenities of an open-air hotel: Wi-Fi, hot tubs, flat-screen televisions, spas and even personal butlers. Depending on what customers opt for, prices range from €50 to €400 a night, but what they all share is a level of comfort that standard camping lacks. Furthermore, this broad range of options allows consumers to make a more tailored choice to suit their needs.

“We find that our customers want to connect with nature more than ever,” said Tom Dixon, founder of Canopy & Stars, a glamping organiser. “People want to escape the noise and pollution and find somewhere calm. Glamping is a very refreshing experience because a lot of the time there isn’t Wi-Fi and all there is left to do is chat with each other, which is very healthy.”

While the speed of the digital world may have sparked a yearning in people to retreat to the countryside, it has also conditioned us to seek fodder for our social media accounts. Dixon explained to European CEO that while glamping offers a chance for escapism, creating the ultimate Instagram moment is also important to customers. “I hate to say that,” he added, “but there is that element to our culture.”

Diamond in the rough
The Swedish concept of flight shaming (or flygskam) has not swept across all of Europe yet, but the rise in ecotourism has been a boon to glamping. Growing awareness about the effects of air travel and tourism on climate change has spurred demand for carbon-neutral holidays. Glamping is well-placed to capitalise on this incoming demand. By providing vintage or retro services, glamping assets – campervans and tree houses, for example – leave a low carbon footprint and have a negligible impact on the environment. Additionally, customers are able to connect with nature by being outdoors, which is not possible at a hotel or rented apartment. Instead, customers can insert themselves in a more natural setting, whether that is in the form of yurts,
pods or tree houses.

That is why companies like Canopy & Stars are seeing so much growth in cabin and tree house accommodation. “Cabins and tree houses are great for year-round stays,” said Dixon. “It is the best way to spend more time with nature, and that is why we are seeing the strongest growth in these two structures.” According to Dixon, winter bookings have risen by 40 percent in the past year, and he is bullish about further growth around the continent.

In spite of the professed benefits of connecting with nature and being at one with the wild, a peculiar paradox of glamping is that so many home comforts are wedded to the experience: heated floors, modern kitchens and butlers are hardly in keeping with a rural, self-sustaining environment. Swapping urban comforts for the more rugged elements of camping almost serves to undermine the entire mission. The unpolished camping experience doesn’t appeal to everyone, though. Camping involves a lot of equipment and can be a greater source of stress than relief, for young families in particular. Glamping offers a low-pressure way to return to nature.

Thanks to the wide selection of glamping sites, customers can decide how rough around the edges they want their trips to be. Greener forms of tourism should be encouraged, and with more people choosing to engage with them, the industry is set to play a key role in the future of global tourism.