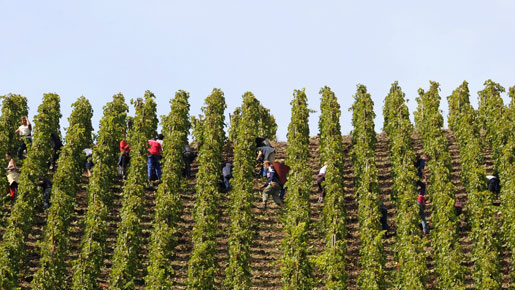 ‘Gastronomy and wine have enjoyed a long and successful partnership’, Michel Roux Senior, the legendary chef of the Waterside Inn in Bray, said at a recent lunch I was lucky enough to attend.

Or, as winemaker David Shinn (below) puts it, ‘Food and wine are forever intertwined – like Abott and Costello, peanut butter and jelly, or the Pittsburgh Steelers and Super Bowl rings.’ So, I like to think you can trust a winemaker who understands his food… and with that in mind, I have selected a few interesting bottles made by people with foodie connections – either former chefs, current chefs, restaurant owners, or simply renowned gourmets.

Chateau Haut Peyrous ‘Retour de Palombiere’ 2007, AOC Graves (approx £10)
Marc Darroze’s foodie credentials are pretty solid – the brother of Helene Darroze, Michelin-starred chef at the Connaught, and from a long line of chefs and restaurant owners. Marc has now been the owner of Chateau Haut Peyrous, in the Graves region of Bordeaux, since June 2008, and has just put his first white wines onto the market, with the 2008 red due later in the year. He did the blending for this red 2007, but he says it is not an ideal reflection of what he wants. While his sister has been busy making a name for herself as a chef, Marc has been training as an oenologist, and has worked in California and Hungary, before returning to Bordeaux. He makes a selection of reds (all parcel-selection and integral vinification) that have their foodie associations right up there on the label; a palombiere is a wood pigeon, and a second red is named after a local breed of pig. The whites are named after peaches, and the local oysters in Arcachon Bay.
2006 Wild Boar Doe, Shinn Estate Vineyards, New York State
(approx $40)
Owner David Page has spent almost 30 years in food, starting in California in the late 1970s and right now on the North Fork of Long Island in New York State. Something that I have noted with many of these foodie winemakers is how much care they take in their vineyards, and how much they lean towards organic, or at least sustainable, viticulture. No doubt because they know so much about the importance of raw ingredients – and no change here, where the vineyards are all about diversity of plant and animal life, and even the vines use several different clones for each variety (that are all vinified separately and blended at the end of ageing), and they use only organic fertilisers. This beautifully-named wine is a blend of malbec, cabernet sauvignon, merlot and petit verdot, and is rich but elegant, with melted tannins.
Bernat 2005 Estate Syrah, Santa Ynez Valley
($40)
Sam Marmostein was a stockbroker before becoming a winemaker, but he now owns and runs the acclaimed Los Olivos Cafe and restaurant in California, meaning his foodie connections are vast. His four acres of vines are planted with Syrah, Nebbiolo, and Sangiovese, and he farms everything without the use of pesticides or herbicides. This natural approach extends through at all stages of the winemaking – there is no filtration or fining and the wine throws up a healthy deposit, as well as plenty of rich, round flavours of cracked black pepper, chocolate and blueberries.

Paternus Cab Shiraz 2005 Ulithorne Wines, McLaren Vale(approx £40)
This winemaker, Rose Kentish, won Winemaker of the Year in McLaren Vale last year. She has a great foodie story – learning fast as a 17 year old cooking and governessing on a sheep station in central west Queensland, and later owning her own restaurant. The beautiful 19th century flour mill that she has restored with her artist husband now hosts various events that she still cooks for, but her main activity is making increasingly acclaimed and sought after bottles of wine. There is again a clear gourmet sensibility that carries through into her approach to wine-making; ‘lots of fruit but restrained use of oak and conscious focus on minimising alcohol’. This succulent mix of cabernet sauvignon and shiraz is a powerful, spicy and enormously distinctive wine.
Tritono Malbec 2005, Mendoza Argentina($40)
The result of a collaboration between a New York-Italian restaurateur Joe Bastianich (who also owns his own wine estates in Friuli and Tuscany), Argentinean winemaker Matias Mayol and his Californian counterpart Steve Clifton (hence the name – a piece of music comprising three different tones – apparently you can find an example in the opening notes to Jimmy Hendrix’s Purple Haze). Very nice depth to this wine, their second vintage, with some lovely spice and great complexity. The vineyards themselves are part of Mayol’s estates, and combine some very old vines (planted in 1926) in the Lujan de Cuyo region with younger vines from the Vista Flores district. No fining, no filtration, crying out for a good steak.
Domaine des Savarines 2004, AOC Cahors(£8.99)
This Cahors estate is owned by Eric Treuille of Books for Cooks, Notting Hill’s infamous foodie shop that not only sells cook books but runs cooking classes upstairs. I seriously recommend getting hold of this wine – the blend makes the most of the power of a malbec, with the elegance and easy drinking of merlot. They keep this wine back until it is ready to drink, so are currently selling the 2004 vintage. The vineyard is fully certified organic and biodynamic (even the new winery uses natural ingredients, such as sheep wool for insulation), and although the owners live in London, they spend almost a week a month there working the four hectares of vines. They try to bring as much diversity as possible through other plantations, mainly fruit trees, and are looking to introduce sheep.
Pinot Noir, Kendric Vineyard, Marin County 2006 (Miller Wine Works, approx $40)
Gary Miller spent 12 years working in New York, Chicago and Aspen kitchens before migrating to Napa in 1999 and founding Miller Wine Works. Working with his wife Kim, they keep production small, high quality and food-focused – meaning thinking about things like good acidity, and not making wines that are so ‘big’ they drown out the food. Kendric Vineyard is located between Tomales Bay and San Francisco Bay, at about 200 metres elevation. The understanding of ingredients comes through in the subtle ways; like using seven different clones of pinot noir, all bringing a slightly different flavour profile. The wine itself has the wonderful gourmet sweetness of a good pinot noir, combined with a classic, almost austere structure that makes the whole thing delicate yet indulgent at the same time. And I love his food pairing suggestions on the website – the grilled halibut with this delicate wine was a great idea.