Europe’s abandoned mansions will take your breath away

Increasing numbers of Europeans are fleeing the country life to earn a living in towns and cities, leaving opulent properties empty to decay. With time and care, however, these forgotten wonders could be worth millions 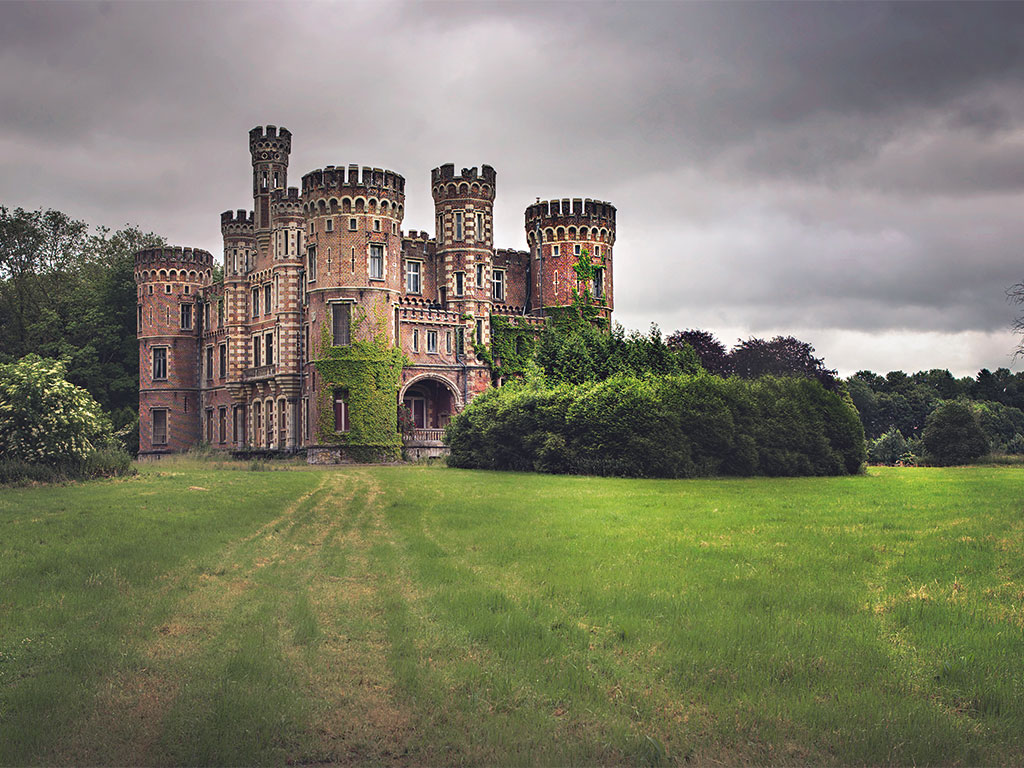 Mansions, palaces, hotels and entire villages have been abandoned across Europe as economic recessions force more and more people to large cities, and increasing numbers of childless owners pass away without passing property on. They may often appear to be dilapidated beyond repair, but these properties could offer huge financial returns for buyers determined to modernise them.

Urban explorers travel across Europe in search of the continent’s most lavish and ghostly abandoned buildings. Breaking past the ‘no entry’ sign, travellers and photographers have revealed a hidden dark side to the property market.

Echoes of the past
Belgium houses the majority of abandoned mansions, hotels and castles, with a total of 300 known abandoned buildings of this nature. Andre Govia, a photographer and urban explorer who travels in search of Europe’s abandoned properties, has visited many of these deserted mansions.

Govia has always been curious about abandoned buildings and all the stories that come with them. “When I first took my steps into these buildings, I began to notice that the history and atmosphere inside had been destroyed by vandals and builders. I then decided to document the findings on my camera”, he said. “It is becoming increasingly difficult to photograph these properties; every country has its own laws and ways of dealing with trespassing. Personally, I am happy to take the risk, and I respect the process.”

One eerie property captured by Govia is the Round Mansion in western Belgium. The mansion was abandoned in the 1990s, but still contains all of the previous tenants’ possessions; the beds are made, clothes are folded on the bedroom chairs, and the peeling wallpaper falls onto dusty, mouldering furniture. Although the price of the Round Mansion in its current state is unknown, other nine-bedroom mansions in the same area are valued at around £4m.

Govia has travelled across the world photographing similar properties, but says the Overlook Hotel, located on the Belgium-Germany border, is especially interesting to him. “With over 350 rooms set in the woods up in the mountains, this very old, impressive hotel is my favourite to date”, he said. “I first explored it four years ago, when it was immaculate and had not been touched for 15 years. Now, sadly, after its name went viral online, lots of vandals were attracted to the area, and the hotel is now recovering from theft and arson. The ballroom and casino have just collapsed from its fifth-largest fire – it’s very sad to see such a beautiful building destroyed.”

Deliberate destruction
Vandalism and trespassing are often problems with abandoned properties, as there are few existing projects to protect and conserve the buildings. It would also be a highly costly investment to employ security to protect the buildings, or to construct a monitored CCTV system. With the owners absent, there is rarely anyone willing to foot the bill for such measures. Following a surge in theft and vandalism, urban explorers are urging photographers and travellers to not state the real names or locations of the buildings, which can at least delay damage.

However, some properties escape notice, and are left empty for decades. A flat in in central Paris has been untouched for 70 years after its owner, known as Madame de Florian, fled to the countryside following the outbreak of the Second World War.

It wasn’t until De Florian died in 2010, at the age of 91, that her heirs hired an auctioneer to register the possessions within the apartment. Although everything was covered in thick layers of dust, the apartment was still in good condition considering it hadn’t been touched since 1942.

The most fascinating find of the property, located in the French capital’s ninth arrondissement, was a painting by the 19th century Italian artist Giovanni Boldini. After the painting was cleaned, it was revealed to be a picture of De Florian’s grandmother, Marthe de Florian – a well-known actress. Stacks of love letters were also found with the painting, suggesting she was a former lover of Boldini’s. The painting was eventually sold at an auction for £1.8m. And, if the extravagant possessions locked away in there weren’t valuable enough, the flat alone was estimated to be worth £2.5m once renovated.

Society for sale
Another country with a huge market for abandoned property is Spain. After the country’s recent recession, resulting in the highest unemployment level in decades, many Spaniards fled their rural homes to find work in the city. Now, estate agents in both the UK and Spain have seen an opportunity in the abandoned property market, and entire villages are up for sale. The sale of one village includes 100 acres of land, three barns, a bakery, an orchard and six houses, all for the grand sum of £146,000 – the same price as a garage in London.

Even villages in the verdant Spanish region of Galicia – which once supported Spain’s highest population density and is home to half of all Spanish villages – are becoming depopulated. Nearly half of the region’s 3,500 villages are now abandoned.

Once a village is renovated, the houses can be sold separately for a price that will generate a substantial profit

Avelino Luis de Francisco Martinez, Mayor of Cortegada, a rural town in Galicia, has even pledged to give away an abandoned hamlet for free, on the condition the buyer will renovate the 12 ruined houses. Although the villages are decomposing, with determination, skill and patience they could be transformed into luxurious holiday homes for both Spaniards and tourists. Alternatively, once a village is renovated, the houses can be sold separately for a price that will generate a substantial profit.

Other abandoned properties include deserted hotels located across Italy, Germany and Austria, complete with grand dining halls, exquisite bedrooms and en-suite bathrooms. Once among the grandest hotels in Europe – holiday destinations for royals and high society – these properties are now crumbling ruins, engulfed in dust and moss.

Lost legends
The attraction for many is that every abandoned building seems to come with its own historical anecdote. Villa de Vecchi, located in the mountains east of Lake Como in Italy, is a hotel villa built by a nobleman, Count Felix de Vecchi, who travelled the world and served as a soldier before returning to Italy with a newfound passion for eastern architecture. De Vecchi chose architect Alessandro Sidoli to build his ideal country home in the mid 19th century. However, Sidoli died the year before the house was completed, and never saw the finished product. Not long after he took residence there, it is said, De Vecchi returned home one day to find his wife had been murdered and his daughter had gone missing. After weeks of searching for her with no success, he committed suicide in 1862.

The villa was passed on to De Vecchi’s brother, Biagio, who replaced the original design with decorative stonework. The family reportedly spent many summers at the villa until the 1940s, after which it lay abandoned for the next 20 years. Now, the villa is known as the Ghost Mansion – haunted perhaps by the tragic figure of De Vecchi, and certainly rendered unworldly by the chilling, overgrown grounds and collapsing walls.

Welcome to London
Although hotels are inevitably more expensive to refurbish and modernise, the average minimum price to buy a small, modern hotel in Germany, Italy or Austria is £5m, and rises to £100m for four-star hotels in capital cities. However, the country with the highest price tag for abandoned properties is the UK: London is home to some of the world’s most expensive abandoned mansions, some worth a staggering £65m.

The Bishops Avenue in Hampstead, also known as Billionaires’ Row, is one of the most expensive streets in the country to buy property. There are currently 16 unoccupied mansions on the street, with 10 abandoned houses that have been empty for 20 years. The combined estimated value of the abandoned mansions is £350m.

The average minimum price to buy a small, modern hotel in Germany, Italy or Austria is £5m, and rises to £100m for four-star hotels in capital cities

CEO and founder of Glentree Estates, Trevor Abrahmsohn, is something of an expert on the street. “We sell around 90 percent of the properties on Billionaires’ Row, and it certainly has an international market”, he said. “From Russians, to Indians, Greeks and Pakistanis, Billionaires’ Row has some of the richest buyers in the world. Glentree does not personally plan on working with the unoccupied houses, which are awaiting planning permission and then will either be refurbished or knocked down and redeveloped.”

It is believed the Saudi royal family previously owned many of the million-pound properties. They allegedly bought the properties during the early 1990s, in an attempt to escape the turbulence of the Middle East and the rise of Saddam Hussein. This would explain why the properties were then abandoned after his defeat in the Gulf War.

Now, nature has taken over these houses; ferns grow over solid stone staircases and animal remains litter the floorboards, which are flooded and vandalised. Most of the properties have fallen into quite considerate disrepair and would require a substantial amount of work before they could be occupied again. Ironically, London was one of the European capital cities that did not make the cut in the Global Property Guide list of Europe’s top 20 places to invest in property. Budapest, Amsterdam, Istanbul, Zagreb and Skopje ranked the highest, on the basis of pro-landlord laws, good yields and low transaction costs.

The UK’s property market is currently on the brink of a crash, as household incomes fail to keep up with skyrocketing mortgage prices. The average price to a buy a house in the UK was £291,504, according to the UK Office for National Statistics, at the time of going to press: the average London property price was a staggering £551,000.

If estate agents reduce prices and allow room for renovation, abandoned mansions would stand a better chance on the property market. The proportion of empty properties in London illustrates what is wrong with the capital’s housing market; the city has countless citizens living in poor-quality housing, yet million-pound mansions remain empty.

London is an extreme example, but the same is true across Europe. Beautiful, huge properties are sitting empty, while the countries in which they are found face housing stock crises. Vandalism and over-exposure exacerbate the problem, and the starting point for large-scale renovation must be a national and international preservation programme – something that is, sadly, unlikely to materialise any time soon.