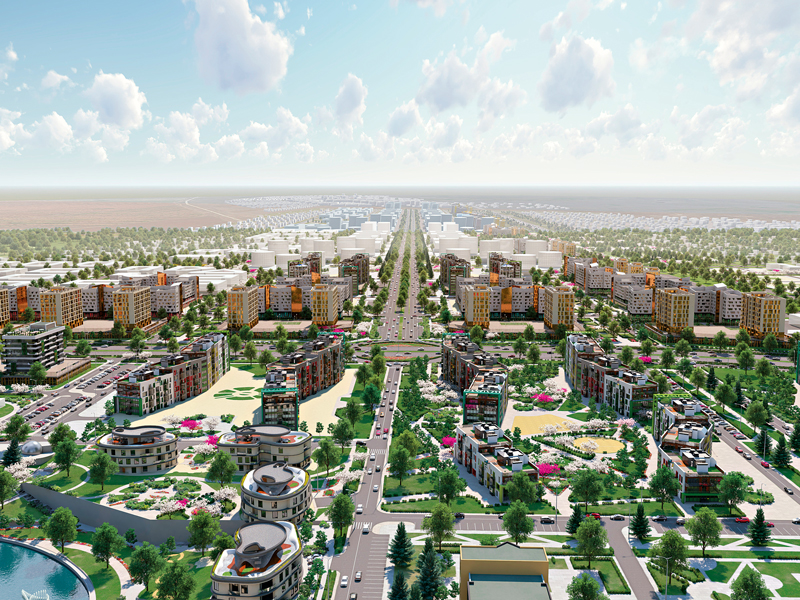 Dana Holdings was among the first foreign companies to identify Eastern Europe as an area of potential economic growth, even as it grappled with its own country's political instability
Industry Outlook

Every city has a story to tell. Urban planning projects have the power to radically shape cities, driving them forward economically and socially while creating a better quality of life for the citizens who reside there. Perhaps no company understands the transformative potential of large-scale real estate projects better than Dana Holdings, which has been pioneering the development and construction of ambitious ventures in Eastern Europe, Russia and other Commonwealth of Independent States countries for more than 40 years.

In the early 1980s, Dana Holdings was among the very first foreign companies to identify these countries as areas of potential economic growth, even as it grappled with its own country’s political instability. By focusing on these emerging markets in the years since, the company has found great success with its innovative ‘city within a city’ concept, which combines residential, business, entertainment, cultural and educational facilities, enabling residents to tend to all of their needs in a single convenient location. These comprehensive construction projects have also helped to establish the cities in these markets as strategic financial centres, with state-of-the-art business infrastructure attracting foreign investors, entrepreneurs and international businesses.

Minsk World
The practical impact of such projects is perhaps best seen in Russia, where Dana Holdings has completed many successful ventures and continues to maintain a presence to this day. Many of its finished projects have served a significant social and economic purpose in the country, such as the main administrative office of Russia’s central bank, which sits in the heart of Moscow, directly opposite the Kremlin.

In Russia’s easternmost town, Anadyr, the Dana Holdings team worked diligently in minus 50 degree temperatures to construct crucial infrastructure projects including an airport, hotel and administrative facilities, as well as erecting the Institute of Natural Sciences at the North-Eastern Federal University in Eastern Siberia. Today, the company is looking to replicate this success in strategic locations across Central and Eastern Europe, and is currently in the process of building multifunctional complexes in the rapidly expanding capital cities of Belarus, Kazakhstan and Serbia.

The Belarusian capital of Minsk is home to one of Dana Holdings’ most ambitious projects to date. Comprising 24 residential quarters, open boulevards, a city park, playgrounds, cycling tracks and even a new metro line, the three million square metre Minsk World is its own contained community within the city, and is a place where residents and guests can work, shop, learn and thrive. The planned international financial centre is set to become the cornerstone of the Minsk World complex, acting as an integral part of the national economic landscape and playing a crucial role in attracting foreign investment to Belarus. What’s more, it will connect the financial giants of the East (Tokyo, Hong Kong and Singapore, among others) with major centres in the West, such as London, New York and Paris.

Lying at the heart of Eastern Europe, Belarus is favourably positioned to form a bridge between these dynamic economies. Furthermore, the cutting-edge international financial centre could well act as a catalyst for economic development throughout the region. Along with the country’s convenient location, Belarus benefits from a strong and stable political system, a high level of national security and a reliable network of human resources, which will further appeal to international investors. With this in mind, Dana Holdings has also developed the one million square metre
Mayak Minska complex in the region.

Crucially, though, Minsk World is not just a complex of skyscrapers: it is one of deep infrastructure, innovative design and social cohesion. With a range of forward-thinking business and finance education centres scheduled for construction, Minsk World is also anticipated to become a major educational hub for training personnel in the banking and finance industries. What’s more, although Minsk World is set to become a part of the Belarusian economic space, it will benefit from a special system of incentives designed to raise capital and provide financial services. These incentives will undoubtedly help to further Dana Holdings’ vision for Minsk World, driving economic growth and bringing prosperity to all.

Tesla City
Moving south-west to the Balkan nation of Serbia, the vibrant city of Belgrade is home to another ambitious Dana Holdings project: Tesla City. Named after the celebrated Serbian-American inventor and engineer Nikola Tesla, this two million square metre development hopes to modernise Belgrade’s city centre, while perfectly complementing the capital’s beloved architecture. The project seeks to seamlessly blend the future and the past together, with a newly created boulevard connecting Tesla City with the historic city centre. Boasting residential areas surrounded by greenery, shops, restaurants, swimming pools, an aquarium, an ice rink and its own metro station, Tesla City is expected to completely revitalise the area, bringing with it a flurry of new economic activity.

At the very heart of this development will be a large, round plaza that will act as a meeting point and a social centre. This picturesque plaza will also house the Belgrade International Financial Centre, which will serve as a crucial financial hub not only for Serbia, but also for the wider region.

Tesla Park
Set in the heart of the Eurasian Steppe, the expansive nation of Kazakhstan has one of the fastest-growing capital cities in the world. The newly renamed city of Nur-Sultan (previously Astana) became the capital of Kazakhstan in 1997 and has undergone a period of rapid development and modernisation in the two decades since. Futuristic buildings and towering skyscrapers now dominate the skyline, while the population has more than doubled since 2002. With such an impressive rate of growth and a forward-thinking vision, Nur-Sultan has proven itself to be the ideal location for Dana Holdings’ latest development project: the innovative Tesla Park.

Set in one of the most dynamic areas of the city, Tesla Park will cover a total area of 1.5 million square metres and will feature all the crucial elements of a modern, liveable city, including comfortable residential areas, shops, schools and plenty of green spaces.

As the project continues to advance steadily, Dana Holdings’ vision for Tesla Park is beginning to take shape, creating a vibrant hub within the rapidly expanding city of Nur-Sultan. The city’s significance within the region is only set to grow in the years to come, as it continues on its modernisation drive and capitalises further on its strategic location at the centre of the Silk Road. With Dana Holdings helping to drive innovative development in the area, the future certainly looks bright for Kazakhstan’s thriving capital.