It’s taken a decade and £6.5m of funding from a combination of private sources and the Welsh Assembly Government, but the National Art Museum, Wales has finally been brought to life, writes Jo Caird 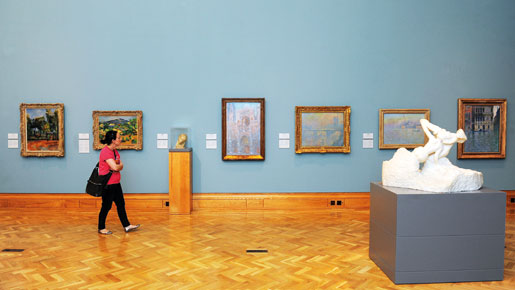 “More contemporary art, a clearer definition of the art of Wales and…to use our collections more imaginatively.” That, according to Oliver Fairclough, National Museum Cardiff ’s (NMC) keeper of art, is what visitors and partner insti- tutions said they wanted during discussions on creating better provision for art at the museum. With the final phase of the four-year launch now up and running, Fairclough can breathe a sigh of satisfaction.

Of the three points raised by museum users, two have been relatively straightforward to address. The museum’s contemporary art offering has been boosted by the opening of the West Wing, six new galleries comprising over 800 square metres of fully adaptable exhibi- tion space. NAM is now the largest space for contemporary art within Wales. Regarding visitors’ desire to see the museum’s collec- tions displayed more creatively, the team have responded by ensuring that a third of the space will be home to exhibitions changing at regular intervals throughout the year, at the rate of a new show opening every two to three months.

Museum users’ final point, however, about raising the profile of the art of Wales within
the galleries presented a more unusual chal- lenge. NAM may host the largest arts prize in the UK – the biennial Artes Mundi prize – and boast a collection on a par with many of Europe’s major public galleries, but it is also responsible for showcasing the national col- lection of a country whose art history lacks a “continuous narrative” and is little known outside Wales. This balancing act – between the international and the local, the celebrated and the unknown – is a delicate one, but it’s also what gives the museum its unique flavour.

Fairclough, who has been keeper of art at NMC since 1998, having first joined the museum staff in 1986 as assistant keeper of applied art, is undaunted by the task. “We’re in the happy position”, he says, “of having both [Welsh and international art], therefore we can do both.”

The initial challenge, however, was defining ‘the art of Wales’ in the first place. Fairclough explains that due to the lack of a proper urban infrastructure in Wales until the beginning of the 20th century, professional artists were essentially unable to support themselves there. The curator goes on to say that, “it’s [therefore] not really a question of being able to point to a specific Welsh school… What we’re doing is identifying Welsh artists within a British tradition, and giving them a great deal more visibility within that context than they had before, and also attempting to demonstrate what our story is and why it’s dif- ferent from Scotland and regions of England.”

But the discussion at NAM is not limited to work by Welsh artists. Wales’s landscape, customs and people have been such a rich source of inspiration for artists from around the world, from the British land artist Richard Long, to the Palestinian video and installation artist Mona Hatoum, that the team at NAM feel that “work depicting Welsh subjects” is as relevant to the museum’s agenda as the output of Welsh-born practitioners.

How Welsh and Wales-related work is exhibited depends on a number of factors. “I’m fairly pragmatic about these things”, says Fairclough, “so it’s a case of different solutions for different periods and different parts of the building”. In the historic galleries, for example, rather than attempt to impose a neat chrono- logical narrative where one does not exist, the team have “develop[ed] a group of rooms which…take different episodes and themes from the history of the visual arts in Wales.”

For Nicholas Thornton, head of modern and contemporary art at the museum and curator of I cannot escape this place, the West Wing’s opening display, “mixing com- pletely international names with Welsh-based artists” is crucial.

“We collect wider UK-based practice and also European and international work, but our focus for displays and acquisitions is the national collection of Welsh art. But we feel that only has importance and meaning if that’s shown in the context of wider art histor- ical debates in the UK, Europe and the wider world. So there are Welsh-based stories and narratives that we tell, [but] we try and link them in whenever we can into a wider art his- tory and a wider social history and that gives the displays lots more meaning and relevance, not just to audiences in Wales but audiences that come to Cardiff [from further afield].”

Regarding I cannot escape this place, which examines “themes of place, identity and the human body”, this policy means presenting some perhaps unexpected pairings of local and internationally acclaimed artists. In a space within the display that looks at the diversification of artistic practice after 1970, Rachel Whiteread’s Untitled (History), a cast of the space around bookcases from 2001, is exhibited alongside West Wales-based artist Paul Brewer’s A Section of My Studio Floor, from 1981.

“They look quite similar”, says Thornton, “[and] by putting those two together we’re saying, ‘she’s an international star, but also he’s an important artist for audiences in Wales and beyond Wales’. I think those pairings provoke people, encouraging them to learn more about artists in Wales.”

The opening of the West Wing follows the unveiling of 10 historic galleries between 2007 and 2008 and seven new galleries for Impressionist and modern art in 2010. The museum’s total exhibition space is now 4,000 square metres – not quite sufficient to display every one of the 40,000 pieces in NAM’s impressive collection, but enough to make it one of the largest art institutions in the UK outside of London. It’s still early days for the museum’s new galleries, but Fairclough reports that the place is busier and has more of a buzz to it than ever before. It’s time for the art of Wales to take its place on the international stage.