Defence and aerospace firm Finmeccanica have jobs to offer but can't find the right people, despite high youth unemployment 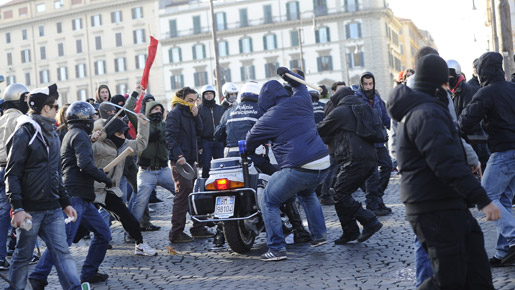 “It’s difficult to find the technicians we need,” he said. “It’s above all an issue of quality.”

A new system of university-level technical training is due to be launched this year to help bridge the gap that threatens Italy’s productivity and competitiveness, and to try and overcome a cultural bias against vocational education.

A mismatch between education choices and the skills Italian businesses need has led employers’ groups to complain they lack 110,000 qualified technicians every year, while more than a quarter of young people are out of work.

He said that they have fewer problems in other countries where they operate such as Britain and France.

But convincing young people of the appeal and prospects of a technical education may be a long struggle due to the prestige attached to intellectual work and common views that humanities courses are broader, easier and more interesting.

“I prefer a more general education, technical courses are too specialised,” said Jacopo Cenciotti, a 25-year old student of communication. “I like talking to people whereas I think technical jobs are more individual manual work.”

More than 30 percent of Italian graduates between 25-34 years old are unemployed, but poor prospects are not enough to put students off their favourite subjects, and many avoid technical courses because they think they are too difficult.

“I can’t get to grips with technical stuff, it’s useless trying,” said 21-year-old Fabio Colace.
Even people who are more inclined to manual work at a young age are often persuaded into the more traditional route of high school and then university, as opposed to technical training leading straight to a job, due to academic prestige.

“It’s a cultural problem, a widely diffused view that technical education is lower in the hierarchy of studies,” said Alberto Barcella, who deals with school and education issues for Italian business group Confindustria.

More than half of Italian graduates are in the humanities and social sciences field, a higher rate than in most of its Western European peers, according to the EU statistics agency Eurostat.

Italy has a rich tradition of skilled trades of all kinds and a host of highly regarded engineering firms but business leaders fear not enough skilled labour is being replaced by younger generations.

With one of the world’s lowest birthrates and an aging population, Italy’s standing as the second manufacturing producer in Europe after Germany is at stake, said Barcella.

He said recruitment from abroad was limited because Italy’s mostly small and medium sized companies lack the experience and know-how for hiring foreign labour.

Eurostat figures show the number of tertiary-level graduates in science and technology per 1000 inhabitants in their 20s is about 11 in Italy, compared to 18 in Britain, 20 in France and an EU average of 14.

Only two thirds of Italian graduates under 35 are working, compared to nearly 90 percent in Britain, Germany and France, according to figures from research institute Censis.

Human capital
About 22 percent of Italian graduates studied science and engineering, Eurostat figures show, slightly below rates in France and Germany. But Italy also lags in the development of technical training as an alternative route to university.

Mantovani said about half of managers surveyed within the Finmeccanica group were not fully satisfied with people selected for technical roles due to lacking skills, and they had to invest a lot in extra training for employees.

“A better solution would be to carry out this training before they join the firm,” he said.

That is the aim of the new technical courses.

Until now, advanced technical education in Italy has been limited to shorter, temporary courses launched by local authorities and lacking appeal and prestige for students, organisers of the new scheme said.

About 14 percent of all Italians hold a tertiary degree, half the average of developed countries in general. The technical diplomas should increase the number of people finishing higher education.

Students will learn skills for sectors such as sustainable transport, energy efficiency or export products. A third of the course will be spent working within a company such as Finmeccanica, which is cooperating with several courses.

The Organisation for Economic Cooperation and Development says the plan could help boost productivity in one of the eurozone’s most sluggish economies.

Student unions have welcomed the new links with business but say education needs to maintain a degree of autonomy and that the curriculum of technical schools should be broadened to keep young people’s options open.

“Education is not just a direct channel to the world of work, it is also about knowledge and knowledge is not only linked to work,” said Mariano Di Palma from the Students’ Union.