Warsaw’s contemporary art scene has undergone an incredible transformation in recent years and is thriving like never before. We pay a visit to some of the best museums in the capital 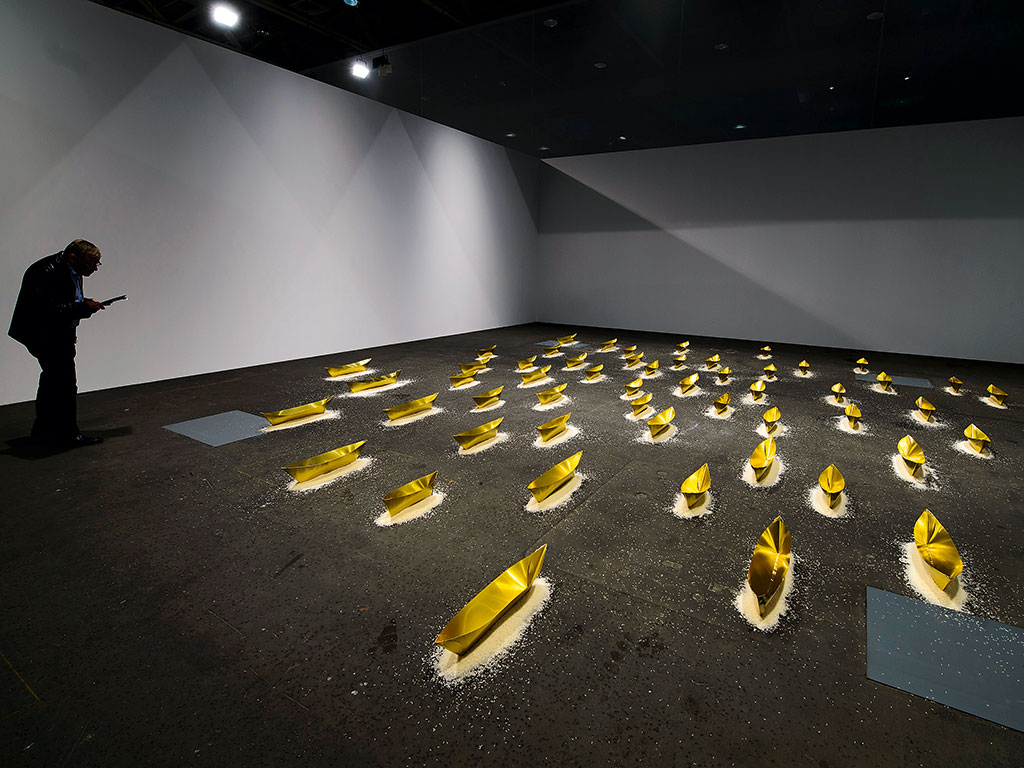 An installation in a Warsaw gallery
Lifestyle

On the evening of May 14, 2013 the Museum of Modern Art in Warsaw (MMAW) was so busy that it was difficult to see the art works on display. Almost every square foot of the institution’s temporary home, a former furniture store on a street in view of the city’s iconic Palace of Culture and Science, was filled with people and even more milled about on the pavement outside. The event drawing the crowds was the opening of In the Heart of the Country, the first exhibition of the state-funded museum’s growing collection of Polish and international contemporary art.

Dreamt up by the Ministry of Culture in 2005 following Poland’s ascension to the EU, the museum has been effectively homeless until now. A new building has been part of the plan from the very beginning but a series of disagreements between the architect appointed and the Warsaw authorities have caused delays. The planning process is due to start afresh later this year, with a permanent residence for the collection potentially ready by 2018.

Museum of Modern Art
Until then, home is the former Emilia store, a much-loved Warsaw landmark built in the 1970s. The building was inaugurated in October 2012, opening with an exhibition called City for Sale – The History, Present & Future of Advertisement in the Streets of Warsaw, but the present show (that runs until 6 January 2014) marks the real beginning to MMAW’s public-facing life. The excitement about this new development was palpable at the launch of In the Heart of the Country – a public event – it was attended by a wide range of people, not the select crowd that one might expect at a traditional exhibition opening.

The museum’s director, Joanna Mytkowska, puts this “energy” down to the various controversies around the plans for the new building. MMAW has become “not a normal governmental project but a sort of centre of public debate”, she says. The museum is sparking discussions not just about the status of contemporary culture in Poland, but even bigger questions about the role of society and politics in a nation that is still finding its way in the post-communist era. Raster Gallery
When Lukasz Gorczyca and Michał Kaczyński founded Raster Gallery in 2001, there was no contemporary art scene to speak of in Warsaw, either at a level of private galleries or public institutions. Today it is thriving. Last September, Warsaw Gallery Weekend 2012 – the second incarnation of this annual initiative to raise the profile of the city’s gallery scene – saw 17 private institutions open their doors for exhibitions, talks and other happenings.

Two years ago, Raster moved from a hard-to-find gallery space in a Communist tower block to a white cube with a striking street presence. Just a few minutes’ walk from MMAW, this central area is home to a number of other private galleries, including Foksal Gallery Foundation, which was founded in 1966 by a group of Polish artists and critics, Galeria Kolonie, a newcomer to the scene, opened by young art critic Jakub Banasiak in 2011, and Lokal 30, which began life in 2003 as an open studio, before graduating to a gallery proper in 2005.

Crucial institutions
Warsaw’s art scene will never be quite on the scale as that of Berlin, says Gorczyca: the property market in the German capital creates a far more welcoming context for prospective gallery owners and artists than its Warsaw equivalent, the infrastructure is better in Berlin, and so on. But Gorczyca can’t help but be gladdened by feedback received from visitors to past Warsaw Gallery Weekends who say: “Warsaw looks like Berlin ten years ago, [it has] this kind of vibe and this kind of energy.”

But if the gallery owner doesn’t feel that his city can take on Berlin, that’s not to say he isn’t ambitious for Warsaw. “I think we have a chance to be a very interesting, very important regional centre if we develop more links to our southern and eastern neighbours,” he says.

Gorczyca calls MMAW a “crucial institution” on the Warsaw scene, pointing in particular to the way the museum “puts local art in an international context”. The museum’s collection is around 40 percent Polish and 60 percent international. Its director feels “completely linked to our generation on the international art scene”, showing work in Brussels, Berlin and New York. A handful of the city’s private galleries are players in the global market and many regularly present work by non-Polish artists, but the presence of a properly resourced state-funded institution takes this dialogue with the outside world to a new level. Opportunities for the artistic community in Warsaw and the public are myriad. Abbey House
One Warsaw institution that probably won’t be taking part in this year’s Warsaw Gallery Weekend is the fine art auctioneer Abbey House, whose gallery can be found on the fourth floor of luxury department store Vitkac. Set up in 2010 and floated on the Warsaw Stock Exchange the following year, Abbey House is a controversial new addition to Warsaw’s contemporary art scene. Some even argue, indeed, that the gallery’s overwhelming emphasis on art as investment precludes it from being considered part of the scene at all.

For the artists Abbey House represents however – all of whom are contracted for a period of five years to supply a specified number of art works per month in exchange for a regular stipend – the gallery offers a route to collectors in the same way that the city’s more traditional private galleries do for their artists. Abbey House has not grown organically out of the art scene in the way that most of the city’s other galleries have. Rather, its founders, Pavel Makowski and Norbert Pyffel, recognised a business opportunity in the workings of the Polish art market and are making the most of it.

That may displease veterans of the Warsaw art scene, who don’t like the idea of business piggy-backing on art. But looked at in another light, the very existence of such a venture can be taken as evidence of an art scene that is vibrant, forward-looking and ever-evolving. Hard to argue with that.