Since he became CEO of UniCredit, Ghizzoni has taken risks. Whether or not these risks can rejuvenate shareholder confidence remains to be seen 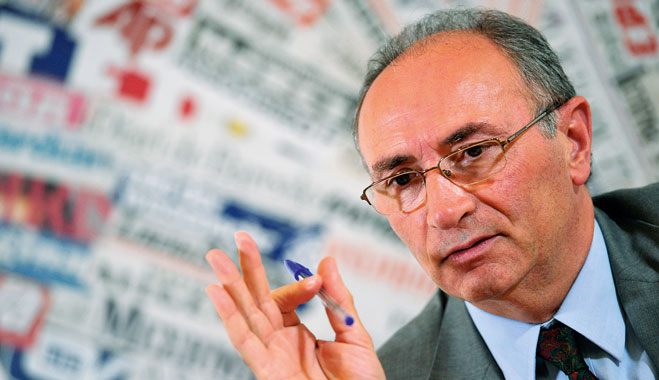 Whereas Profumo had turned the regional bank, Credito Italiano SpA, into UniCredit, the sixth-biggest bank in Europe, this had been achieved through a policy of costly takeovers, which ultimately left UniCredit short of funds. The beginning of the end began in 2008, when investor confidence saw the bank’s share price plummet and credit become hard to find, forcing Profumo to turn to investors for cash twice in an 18-month period. The tension with the banking foundations increased after one of its two Libyan- based investors raised its shareholding, ultimately forcing Profumo to step down.

Steadying the ship
Ghizzoni’s appointment as CEO was widely considered as a move to halt the internal disputes that had dogged the bank under the high-profile and charismatic Profumo, who had clashed with the Italian banking foundations that held a minority shareholding in the bank. At the time, 54-year-old Ghizzoni, who, prior to the appointment, was directly in charge of the bank’s Central and Eastern Europe division, was the board’s unanimous choice, ahead of fellow Deputy CEO, Roberto Nicastro.

However, Ghizzoni’s appointment was regarded with scepticism by some quarters. Himself, together with the three other deputy CEOs, were known collectively as the ‘Profumo boys’ by the Italian media, as a result of their close association with their former Chief Executive, who had promoted all four through the ranks. If the board were looking for some- one with experience they could not have found a better candidate. Ghizzoni had spent his entire 30-year career at UniCredit, starting life as a customer relations manager at a branch in his home town of Piacenza, before going on to hold senior management positions in the bank’s international operations, ranging from Western Europe to Southeast Asia. In the 1990s, Ghizzoni had served as Deputy General Manager of the London office and later went on to run the Singapore operations. In 2000, he took up a position as head of UniCredit’s Polish division, Bank Pekao SA, and three years later was placed in charge of the joint venture that controls Turkey’s biggest bank, Yapi Kredi SA.

Following his appointment as CEO, Ghizzoni declared his intention to position the bank as an ‘international group with a local presence’ and stated his desire to grow organically in Europe. However, less than one year into his tenure, Ghizzoni’s strategy was skittled by a combination of disappointing financial results and new EU regulatory measures. In November 2011 the bank posted quarterly losses of €10.6bn, including write-downs of €10.2bn. Additionally, the company’s shares had fallen by almost 50 percent since the previous year. These factors prompted Ghizzoni to take drastic action. In response to this Ghizzoni announced that, going forward, UniCredit would have to dramatically reduce its expenses by undertaking a three-pronged approach: by reducing its activities in mature markets in order to refocus on Central and Eastern Europe, by cutting jobs and by seeking to raise substantial funds via a new rights issue, in order to stabilise its balance sheet.

Cutting costs
In terms of the strategic re-alignment, Ghizzoni said that the bank would have to cut costs in some of its Western Europe departments, initially by closing some operations in London, a move that would allow it to take a new path of seeking to form new strategic alliances in brokerage and research.

On the job front, he proposed the cutting of some 5,200 jobs – equating to approximately 12 percent of its work force in Italy – by 2015. The move, he said, would allow it to cut personnel costs by eight percent in 2012.

Furthermore, with other financial institutions in the region having to write down the value of their sovereign bond holdings, the European Banking Authority and the EU in late October called on banks to raise their core Tier 1 capital ratios to nine percent by the end of June 2012. These new guidelines left UniCredit with a capital shortfall of about €7.4bn.

Finally, Ghizzoni announced that the bank was seeking to raise €7.5bn in a stock offering of common shares. As part of this strategy, in December 2011, the bank issued 3.86 billion new shares – almost twice as many as were already in issue – in order to boost the higher capital ration required by European regulators.

But, under pressure from underwriters and book runners – including UniCredit’s own investment banking unit – Ghizzoni agreed to a hugely discounted price of €1.943 for each new share issued, equating to less than one tenth of the group’s share price in February 2010.

Investor appetite was truly tested. Immediately following the announcement, shares in UniCredit fell by 45 percent and trading in the bank’s stock was suspended because of market volatility. Ghizzoni cited ‘technical reasons’, but even they couldn’t detract from the fact that the market value of $9.65bn was only slightly higher than the amount the bank had hoped to raise with the rights issue.

Although it may have been born out of desperation, it was a bold move by Ghizzoni. On the one hand, it would appease nervy investors, but on the other a big discount could incentivise large shareholders, including Libyan institutions and Allianz, to take large stakes in the company.

The response to the share issue sent shockwaves through the European banking community as UniCredit was the first Europe- an bank to test investor confidence by seeking to raise new shares. According to regulators, Europe’s financial institutions must raise a combined €100bn by June 2012 in order to comply with Basel III. However, banks may have a difficult time convincing investors to throw more money into the struggling industry if UniCredit’s experience is any indication.

Ghizzoni’s short tenure as head of UniCredit has had its difficulties. If Ghizzoni was seen as the person with the experience and understanding of the bank’s operations to instil much-needed stability, he was not prepared for the market and regulatory turmoil that would mark the beginning of his reign. If Ghizzoni is to remain at the helm for long, shareholder confidence must be regained.