Vodafone’s CEO may come across as a humble man, but behind his soft demeanour is a spirit made of steel, determined to reach new levels of profit 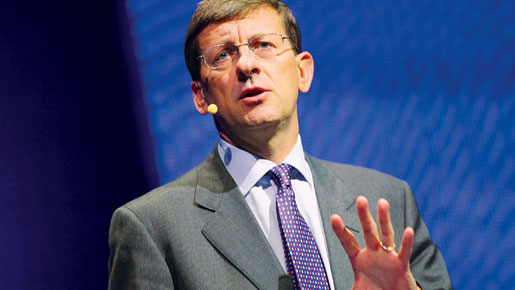 Vittorio Colao cuts a rather peculiar figure; taller than most at a towering 193cm, the 50-year-old sports a full head of nut-brown hair. A self-confessed shrinking violet who shuns glittering events, Colao is decidedly publicity-shy and rarely gives interviews. But the handful of journalists who have met the elusive Italian approve of him rather a lot.

“Then, I come across a person who has an easy manner, is direct and funny, but also serious and full of charisma, and, I suspect, has no problem at all motivating people. Such a specimen is Vittorio Colao, chief executive of Vodafone,” exclaimed an editorial member of Management Today after having been afforded the rare opportunity to meet Vodafone’s CEO face-to-face.

But behind the lovable façade is, if not a ruthless shark, then at least an individual with a razor-sharp mind and a cutthroat approach to business. Colao possesses a strategic mind that few business leaders can rival, while he won’t back down to please shareholders, or anyone else for that matter. The man has a knack for negotiation too. Famously, he managed to fetch £6.8bn for Vodafone’s 44 percent holding in French mobile operator SFR in 2011 – a much higher figure than had been estimated.

In contrast to his highly charged professional antics – but in tune with his humble personality – Colao has adopted a laid back lifestyle, living in leafy South Kensington with his wife and two young children. When not cooking up new plans of action to break new ground with Vodafone, he enjoys cycling in London’s parks, or skiing on the mountains of his motherland.

Vodafone, the Colao way
Outdoorsy activities might be close to Colao’s heart, but one assumes they don’t get a look-in while the Vodafone boss is in his glossy Paddington office in west London. When stepping up to the top job in 2008, Colao went on to change Vodafone’s entire culture, focusing more on the company’s relationship with its customers and giving it a credible and caring front rather than pleasing shareholders at every turn. “You can’t have shareholder value or customer friendliness – you have to put them together or else capitalism can produce problems,” said Colao wisely in an interview for Management Today.

Parting ways with companies in which Vodafone owns stakes but is not in control of – so lucratively managed in the case of the sale of SFR – is one of Colao’s other main agendas. The sale of Vodafone’s 24 percent holding in Poland’s Polkomtel is on the cards, and so too is the shedding of US-based name, Verizon. Other strategic moves at the top of the to-do list include the drive to make Vodafone a market-leader in the field of data services. “There will be a big migration to data. The growth in volumes will be massive; we’re already seeing it – volumes are doubling every year but prices are declining,” Colao has observed.

There’s no doubt that Colao possesses a sharply tuned head for strategic business. While he’s an intelligent man, certain stepping-stones and family influences have no doubt helped shape his character. Born in Brescia, the area of Lombardy that is wedged between Verona and Milan, Colao’s father was a Carabinieri officer. After studying business at Bocconi University, and acquiring an MBA with honours from Harvard Business School, he went on to acquire valuable experience in the investment banking sector, and then proceeded to hone his strategic skills at the Milan office of McKinsey & Co in 1986. He soon became a partner of the firm, covering media, telecommunications and the industrial goods sectors, and he was also in charge of office recruitment.

The makings of a mogul
But the McKinsey & Co project that would prove to be vital for his career development was the launch of Vodafone on the Italian market, which, at the time, was a modest affair. “It was on one page; I remember I wrote the marketing, HR – everything – all on one page. Today it’s a £7bn company,” said Colao when speaking to Management Today.

After his crucial stint at McKinsey – a role which taught him the fundamentals, business ethics and the art of analytical thinking – as well as the reward of plain hard work – he proceeded to take a position at Omnitel Pronto Italia in 1996, a company which was later snapped up by Vodafone. Ascending rapidly up the career ladder, the promising new recruit was named COO and subsequently became regional CEO for Southern Europe in 2001 before joining the main board of Vodafone Group Plc in 2002.

Colao was just short of landing the global CEO post in 2003; instead, the position was awarded to Arun Sarin. At that point, Colao decided to leave, but he has always maintained that his decision did not come about as a result of being overlooked for the CEO role, but stemmed purely from his desire to enter the media. Hence, Italian publisher RCS Media was his next port of call. He wasn’t to remain long at the company, however, and resigned after a dispute with shareholders about the publishing group’s strategy and governance.

Turning his back on the media, new adventures awaited Colao, and Vodafone was yet again to appear on his CV. He was put in charge of the European market and was made deputy chief executive in succession to Sir Julian Horn-Smith. In 2008, he was appointed CEO of the UK’s most valuable brand.

Over the three years at the helm of Vodafone, Coalo has done much good at the company which commands profits of around £9.5bn and serves about 359 million subscribers. But he has also been in the firing line and received a healthy amount of criticism for two separate tax disputes; one concerning the Indian tax authorities and the other related to HMRC, which saw Vodafone agreeing to pay a sum of £800,000 and an additional amount of £450,000 over five years.  While Colao’s CV seems to have gone full circle, his challenges are far from over.