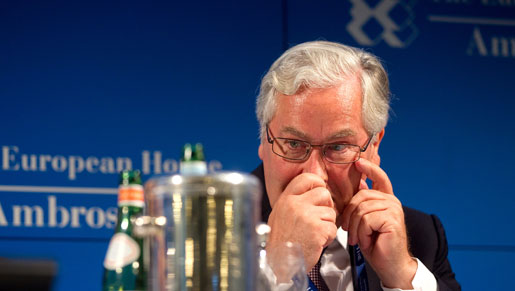 The announcement’s tortured rationale (the committee insists it was motivated by worries of inflation falling below target in the medium term) reflects the increasing confusion engulfing Britain’s economic strategy.

It also shows mounting panic that the deal hatched between the bank and the government last summer (fiscal consolidation in return for low interest rates, or Plan A) has plunged the economy into a prolonged slump.

Unfortunately, it is hard to put much faith in the forecast, given the bank’s poor track record over the last five years. It would have been more honest to admit the bank is unable to predict what inflation will be in six months time, let alone in two years, given the huge uncertainties surrounding the outlook on both sides.

With the quiet encouragement of the government and the City, bank officials have become increasingly disdainful of the target over the last year. Neither the current rate of inflation nor realistic expectations seem to have much influence on the bank’s actual behaviour. It is time for the bank to admit openly the target has been suspended while the committee focuses on more pressing concerns.

Businesses, employees and investors will have to decide for themselves whether to trust the target in the longer term, or if it has become a fair-weather objective, to be cited or ignored as convenient.

The bank’s real objective is not hard to discern. Policymakers are desperately worried about the lack of growth and risk of a further deterioration in output and employment as a result of spillovers from the euro crisis and faltering confidence. But there is scant evidence QE will do much to help. No one seriously expects QE to provide a significant and durable lift to asset prices while markets are beset by the tempest of the eurozone debt crisis. Nor will QE do much to kick-start lending where the real problem is lack of credit-worthy borrowers confident enough to take on more debt to make long-term illiquid investments. And twiddling with asset purchases does little to help banks suffering a sharp rise in their own cost of funding as a result of market fears about their euro zone debt holdings.

Fiscal and monetary cross-dressing
Even the most vociferous proponents of easing, such as Monetary Policy Committee External Member Adam Posen, admit the real problem is confidence and the lack of credit and borrowing rather than the quantity of money or its price. Posen suggested the authorities set up a new institution or facility to start channeling credit directly to small and medium-sized enterprises (SMEs).

But SMEs need risk-sharing equity capital. In most cases the high risk of non-repayment is what makes conventional bank loans impossible. So while the finance minister and the bank talk about a special lending vehicle or programme, it is really a disguised venture capital fund. Bank officials have been the most determined proponents of “credit easing” to aid SMEs. But given the equity-like characteristics of such “loans”, and the need to pick winners, credit easing is really an aspect of fiscal policy rather than monetary policy.

Meanwhile the bank is engaged in quantitative easing to counteract errors made on the fiscal side. By now it should be clear to everyone the government’s rushed fiscal consolidation has been one of the biggest causes of the renewed slump; Britain’s economy was flat-lining long before the euro crisis intensified this summer. It was a charming idea that the private sector would quickly expand to supply demand, jobs and growth and fill the gap left by retrenching government. But the desolation of the north of England following the last big industrial restructuring in the 1980s and emerging markets’ experience undertaking structural adjustment programmes suggests restructurings are long and slow, and much potential output is lost along the way. The problem is that large swathes of the private sector depend directly or indirectly on government contracts for business and employment (government jobs, government procurement, infrastructure spending and public-private partnerships). Fears about the impact of rapid retrenchment have created enormous uncertainty and inhibited both consumer spending and investment.

Loans to allow business to invest will not cure their nervousness about investing when the problem is their public sector streams of revenue disappearing. John Maynard Keynes in the 1930s and Nomura’s Richard Koo in the 2000s explained the stabilising role of government-directed spending and investment in the face of uncertainty. Unfortunately, the bank has encouraged the government to go for accelerated austerity.

Monetary moves will not solve the problem.

Don’t panic
The other difficulty on the private sector side is that the fiscal consolidation programme depended on other governments in the euro zone and elsewhere continuing to borrow and pursue pro-growth policies to provide a growing market for British exports. But while “expansionary austerity” might work in one country, it was bound to fail once all countries tried to do the same thing. The government’s much-vaunted plan for protecting Britain’s credit-rating depended on other countries sacrificing theirs.

The horrible reality is starting to dawn on policymakers at both the Treasury and the bank.

The solution is to use fiscal policy (direct government investment or investment guarantees) to cut through some of the uncertainty paralysing investment. But that would involve a damaging admission of error. The Treasury has ruled out a shift to Plan B.

Recent suggestions the government should accelerate 5 billion pounds worth of infrastructure spending were slapped down. Instead, talk about credit-easing is a form of Plan B-lite.

Wanted: An army of entrepreneurs
Even if businesses are really as desperate for funds to invest as Osborne suggests, whether the easing scheme will work is still extremely doubtful.

The sums are small and it is far from clear SMEs are really the engine of growth and job creation the government and their lobbyists claim. The real constraint is finding useful business start ups and expansions to back.

Britain has been talking about the need to become more entrepreneurial for three decades, lamenting the lack of a German-style Mittelstand and start-up rates well below those in the United States. Experience suggests it is entrepreneurship and skills rather than money which is the real commodity in short supply.

The latest round of QE, and the government’s ideas for credit easing, will have no more than a marginal impact. It would be better to re-examine the basic fiscal-policy bargain that underpinned Plan A back in May and June 2010.

If that is too painful, policymakers better hope the eurozone engages in some good old-fashioned Keynesian stimulus so Britain can get on with its expansionary austerity.