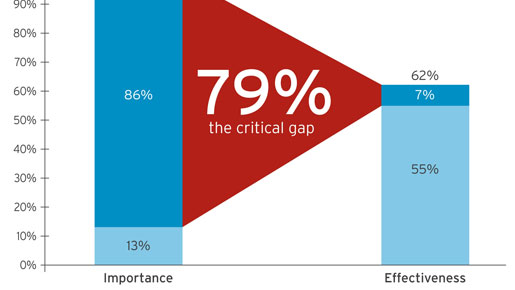 For businesses, governments and communities to solve pressing problems and realise new opportunities, leaders must learn to think and act beyond current group boundaries and identities. Boundary Spanning Leadership, a new book from the Center for Creative Leadership (CCL), shows how this can happen.

Boundaries transcend cultures, contexts and time and are an integral aspect of organisational life, whether in the public or private sector. They are seen as constraining and limiting. But we can also view them as frontiers – the places where the newest ideas are tested and executed.

Technical innovations have revolutionised the workplace, making communication faster and seamless on a global scale. But relational barriers at the human level remain unchanged, and in some cases have deepened in spite of the “flattening” of the world. Boundaries include organisational silos, residual bitterness between historical enemies, culture clashes, turf battles and generation gaps.

In a recent interview in the Wall Street Journal’s digital newsletter MarketWatch about the eurozone crisis, former German Chancellor Helmut Schmidt said: “In general, Europe lacks leaders. It lacks people in high positions in the national states or in the European institutions with sufficient overview of domestic and international questions and    sufficient power of judgment.”

We don’t agree that Europe lacks leaders – but we think many lack the essential tools to deal creatively with cross-boundary challenges. Political leaders made a start with the European Union project but seem to be reinforcing or even re-erecting boundaries in the face of the problems caused by the economic downturn.

European leaders are not alone – political as well as business leaders around the world find it difficult to transcend boundaries and think creatively. But the good news is that boundary spanning leadership can be learned.

The research that underpins CCL’s work is based on over 2,800 survey responses and nearly 300 in-depth interviews with leaders across six world regions, plus interviews with an additional 128 CEOs, senior VPs and directors of some of the world’s most recognisable companies.

Of the senior executives, 86 percent said it was “extremely important” that they collaborate effectively across boundaries in their current leadership roles. But just seven percent of those executives believed they were “very effective” at doing so – a 79 percent gap.

The clear message from the research is that in a flat world, bridging boundaries among groups is the new and critical work of leadership. Boundary spanning leadership is the capability to create direction, alignment and commitment across group boundaries in the service of a higher vision or goal.

In Europe, we’re very familiar with the damage that demographic and geographic boundaries can cause, including social conflict, wars and genocide. We’ve seen some boundaries crumble, such as the Iron Curtain, but arguably others have been erected, with East/West boundaries supplanted by North/South ones, or EU/non-EU membership.

Buffering defines boundaries to create safety. Groups will not be able to collaborate effectively across boundaries until they first feel protected and safe within their own group.

Reflecting creates understanding of boundaries to foster respect. Enables groups to see the boundary from both sides, come to accept this boundary and respect the differences between them.

Mobilising reframes boundaries to develop community. Groups are encouraged to move outside their smaller unique identity to a new, larger, more inclusive identity that is shared by all.

Transforming cross-cuts boundaries to enable reinvention. Groups ultimately learn to transform the boundaries between them, opening themselves up to fundamental change. When this occurs, problems that were previously intractable are resolved and solutions that were once far beyond reach become realisable.

Transforming leadership, transforming the world
It’s encouraging to see organisations applying these practices to realise new possibilities and inspiring results. The process begins when leaders embrace that a new approach is needed for navigating age-old challenges of boundaries.

Whether you agree with their politics or not, the Coalition Government in the UK can be viewed as a boundary spanning experiment, with two very different political parties coming together to try to deliver innovative solutions in response to enormous social and economic challenges.

One of our clients, a senior vice president for human resources at a global IT company who has implemented boundary spanning techniques, says: “Boundary Spanning Leadership articulates a concept we believe is critical to our success at Lenovo: businesses that transform cultural differences into organisational strengths, that focus intensely on building a unified global team, and that make their culture a top priority at every level have the best chance to succeed and build an enduring, winning company.”

Today’s most pressing challenges span boundaries. So too must leadership. The most important issues of our day – climate change, job creation, the drive for innovation, global poverty, healthcare – and the current economic upheaval – require this new leadership mindset.