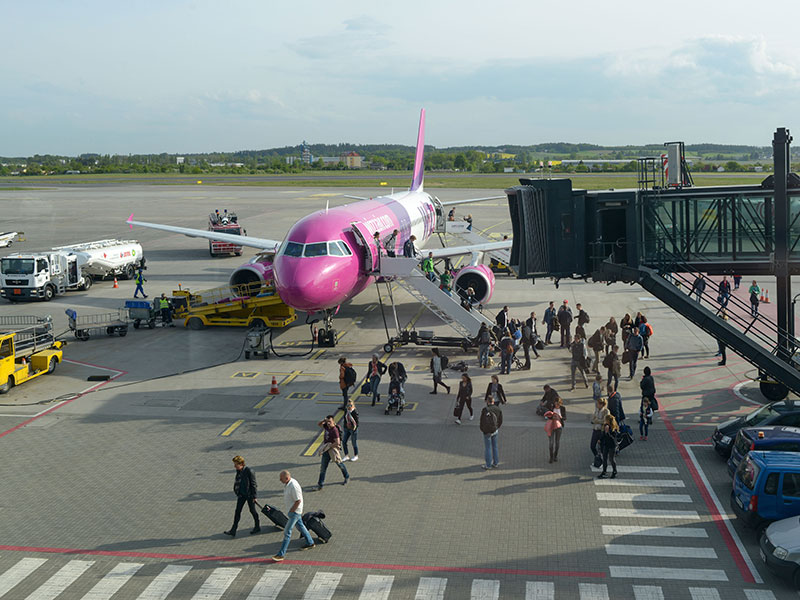 It’s safe to say 2017 was an eventful year for budget air travel. In September, Ryanair’s controversial CEO, Michael O’Leary, announced the cancellation of 18,000 flights. Meanwhile, concerns over the future of UK aviation in the event of a hard Brexit rumbled on.

Yet despite the struggles experienced by leading airlines, some shake-ups in the budget carrier industry have widened the field of competition. Wizz Air, for example, a younger industry player specialising in flights to Eastern Europe, has enjoyed notable success. Analysts at JP Morgan increased their target price for the Hungarian carrier from 3,625p (€40.90) to 4,100p (€46.26) per share on January 2, projecting Wizz Air’s annual growth rate for 2017 to 2026 at a healthy 16 percent.

The company has also started expanding, taking on new staff and new routes. In November, it announced the landmark purchase of 146 A320 neo family aircraft, with a market value of $17.2bn (€14.33bn). Appropriately for an airline that claims to ‘wizz’, consolidation has been achieved with remarkable speed. Formed in 2003, Wizz Air’s first flights from Sofia took off in 2005. Today, the airline provides 33 percent of Bulgaria’s flights, and entered the London Stock Exchange in 2015.

Flying colours
Much of Wizz Air’s success can be attributed to CEO Jozsef Varadi’s business model, which is founded on three core strengths. First, by flying to underserved destinations with growing economies, Wizz Air has adroitly capitalised on the increased flow of tourists to Eastern Europe in recent years. The popularity of cities like Budapest and Sofia, where a rich cultural heritage can be enjoyed for a low cost, looks set to continue. Here, Wizz Air’s no-frills service has provided transport in line with the budget price of local accommodation.

The airline has also benefitted from Varadi’s understanding of the market: Wizz Air now drives its marketing towards digitally-adept young people and students, moving away from its initial focus on cheap services for migrant workers.

Speaking to European CEO, Johan Eidhagen, the airline’s Chief Marketing Officer, emphasised the importance of Wizz Air’s digital brand: “We are constantly striving to improve every stage of the passenger journey, and the digital experience is crucial to helping us achieve this. The Wizz Air website and app, which were both relaunched last year, give Wizz customers ultimate flexibility and transparency in the booking process.”

Eidhagen also values Wizz Air’s social media presence: “The Wizz Air website is the sixth most visited airline website in the world, the app is available in 13 languages and Wizz has the most Facebook fans of any European low-cost carrier.”

In a publicity campaign called ‘#IamWizzAir’, the airline has gone to unusual lengths to engage all of its Facebook users. Cabin crew with a strong following on social media are encouraged to share their experiences online, with much of the carrier’s social content created by its crew. Eidhagen believes this “showcases… the young, vibrant spirit which Wizz is famous for”.

The desire to create a vibrant, fun brand has also bled into Wizz Air’s memorable colour scheme – air stewards and planes decked out in vivid pinks and blues are difficult to miss, even at 35,000ft.

Putting customers first
These strategies are symptomatic of a simple underlying factor: the centrality of the customer in the Wizz Air model. Ryanair’s record year of disgruntling travellers and pilots alike peaked with the dramatic exit of a passenger onto the wing of a delayed plane on New Year’s Day. This followed the Irish airline’s agreement to deal directly with pilot unions last year in a desperate attempt to avoid strikes over Christmas.

Despite efforts to put customers first through its ‘always getting better’ campaign, a Which? survey undertaken between September and October 2017 found that Ryanair had the lowest customer satisfaction rate of any European airline (tied with Spain’s Vueling). While the airline never had a reputation for comfort – rather a dogged commitment to driving fares down – the gains made by Wizz Air are testament to the desire for change in the sector.

In for the long haul?
The most urgent concern for emerging budget airlines is sustainability. Norwegian Air, another relatively new and extremely ambitious carrier, has increased its fleet substantially in the last five years. The speed of the airline’s complex expansion, which has included the ordering of vast numbers of different aircraft (Airbus and Boeing for short haul, 787s for long haul flights), has already put pressure on business operations.

Wizz Air may be taking on new aircraft, but Andrew Lobbenberg, an aviation analyst with HSBC, thinks comparisons with Norwegian’s drastic expansion may be unfounded: “It’s quite aggressive growth, yes, but it is fairly gradual between now and 2026. The new aircraft are consistent with what they have. It remains a clean, simple business model with a consistent fleet plan of narrow-bodied Airbus aircraft.”

The year ahead
A trying year lies ahead for Norwegian, with Bloomberg estimating the airline will sustain an operating loss of NKR 1.48bn (€153m) due to falling unit revenue and rising unit costs. Yet Wizz Air’s more focused strategy will confirm the effectiveness of maintaining a simple business model; the continuing strength of the Eastern European economy and the airline’s popularity with passengers should ensure a successful 2018.

Ryanair, however, will be making significant waves as it sets its sites on Eastern Europe too. Bouncing back from months of operational disruption, Ryanair will prove a fierce competitor, testing the value of Wizz’s customer satisfaction.

But the ultimate issue for both airlines is economic. Lobbenberg argues we are already seeing signs of cost inflation as the region’s economy continues to grow and living standards rise. That means rising labour costs for Wizz Air’s social-media-savvy cabin crews. In the long term, the end of the East Europe’s low budget sweet spot could be in sight.